I was reading an article the other day on Abraham Lincoln and came across his retelling of this story: 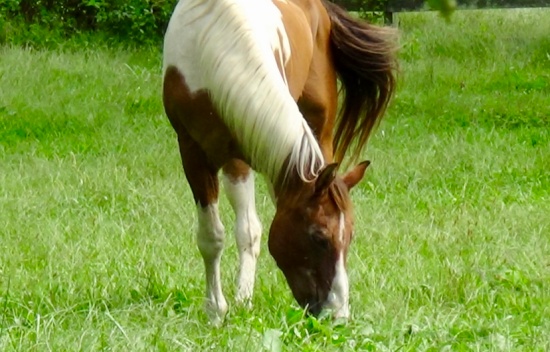 “I was jogging along at a slow gait, immersed in deep thought, when suddenly I was aroused – I may say the arousement lifted me out of my saddle as well as out of my wits – by the report of a rifle. Old Abe, with one reckless bound, unceremoniously separated me from my eight-dollar plug-hat, with which I parted company without any assent, expressed or implied, upon my part. At break-neck speed, we soon arrived in a haven of safety. I can truthfully say that one of the Abes was frightened on this occasion, but modesty forbids my mentioning which of us is entitled to that distinguished honor.”

Lincoln was well known for his sense of humor and it reminded me of a funny episode that happened to me once when I was out for a trail ride.

Here’s what led to that.

I bred my oldest horse Jazz when he was 5 and I ended up with a beautiful colt I named Apollo.

Whenever he got scared when he was very young I would pet and hold him in order to reassure him.

As we progressed through his training, we’d try new things, and whenever he got scared he’d try to get as close to me as possible so I could calm him down.

This worked well as it enabled him to quickly gain confidence in each new situation, safe in the knowledge that I would protect him.

However, I should have remembered the words of wise old Abe – the man not his horse.

I’ll tell you what those wise words were in a moment and you’ll see how appropriate they were.

When Apollo was 2 years old and almost as big as his father, Jazz, we all went out on the trail together, I rode Jazz and ponied Apollo alongside. 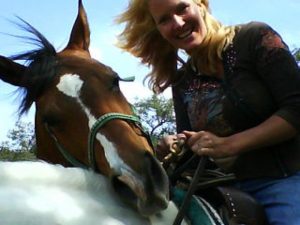 These were trails that we were all used to, so I didn’t think there would be any problems.

But suddenly out of nowhere appeared this jogger listening to a Walkman (this was a loooong time ago) and Apollo instantly freaked out and before I knew it, he was in my lap looking for reassurance.

And yes, I was still riding Jazz!

Apollo had gotten scared, reared up and put his front legs over Jazz’s back, and landed right on top of me in the saddle. My legs were pinned in the saddle under Apollo’s weight with his head in my lap.

“What the heck am I going to do now…” I thought, “So one or more of us doesn’t end up getting seriously hurt.”

Luckily though my nurturing instincts kicked in and I just wrapped my arms around Apollo as I always did and calmed him down.

Jazz then picked up on my lack of panic and when everyone was nice and calm, he just bent his head down which allowed Apollo to just slide off over his neck and back down to the ground.

I was so relieved everyone was OK, I started to laugh imagining what the scene might have looked like if someone had been watching us.

What made it funnier was that after he slid down, Apollo looked at me as if to say, “OK Mom, I’m better now, let’s go!”

We continued on with no further issues and as soon as we got back to the barn you can be darn sure I set to work on training an alternative panic button for Apollo.

As I said, I should have remembered the words of wise old Abe Lincoln: 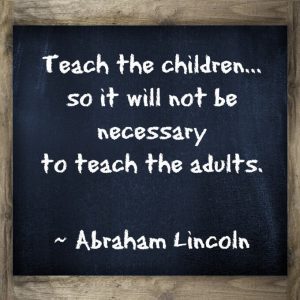 However, the true moral of the story lay with the strength of the bond and partnership I shared with Jazz. We always looked out for each other and our mutual trust meant that when I stayed calm he knew he could stay calm too and between us we were able to resolve what could have been a very dangerous situation for all 3 of us.

Have you had any close escapes? Or occasions when you’ve been able to count on your horse?

As always, do write and tell me, I’d love to hear from you in the comments below.