This week when my husband came out to the farm with me to be with Merlin, he saw something new. There was another horse in with Merlin and it was chasing him around the pasture.

The farm owner had put a new mare in with Merlin and there was a bit of drama going on when we got there.

Part of the process of weaning Merlin from his mother is to allow his mother to push him away naturally but also not let him feel alone. I do this by having him a part of a herd of 4 or more, mixing up horses in and out of the herd, and getting him used to other horses.

I don’t want the weaning process to be too abrupt or traumatic in any way. This just causes anxiety and abandonment issues and could create fear memories.

So, I’ve asked the farm owner to swap out the other little colt and mares that have been in the herd before with Merlin into his new pasture. 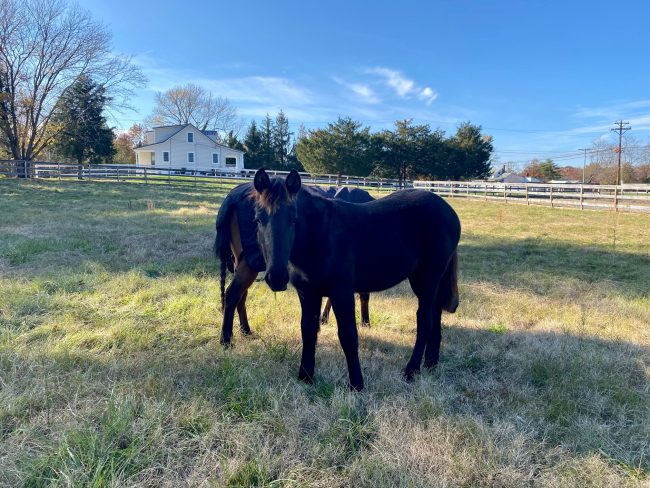 That way he doesn’t get herdbound to any one horse, he gets used to horses moving in and out of the pasture, he gets used to the activity on the farm, and he gets lots of natural “horsey” lessons from the other horses.

There are lots of things to consider when starting a new colt.

One of which is also to keep him feeling a part of the herd whether I’m there or not. I also don’t want him becoming aggressive or pushy by being the only one in the pasture and getting territorial. He needs to learn how to be a well-mannered member of the herd.

Well, this mare was definitely teaching him some manners when we got out there. Something must have happened as she was not happy with something Merlin had done.

She had her ears pinned back and a nasty look on her face. Merlin had the look of a child trying to get away with something and being caught. She was pushing him around the pasture, stopping for a bit, and then putting her head down and pushing again.

It went from running, to trotting, to walking and then trotting again. She was definitely trying to teach him some sort of lesson. I wanted to run in and stop her immediately but we just watched for a minute to see what was really going on.

In truth, she wasn’t being mean and running him around the pasture for the heck of it. You could see every time she stopped she was looking at him as if to say, “do you understand”?

He would start to walk away, but then do something in defiance like look at her and kick up a back foot or shake his head as if to say, “I don’t care”.

Well that was not the right response. Then she would push him again when he gave her attitude. It was very interesting to watch because you could really see the lesson she was trying to teach him. There was a specific purpose for the interaction.

This just lasted about 2 minutes and Merlin finally said “OK” and gave her the respect she was asking for and they both went to eating grass next to each other. That’s when we started up to the pasture gate and Merlin saw us and whinnied.

By the way, this is the first time that Merlin has whinnied to us. I think he was so relieved to see friends and he wanted to play. He whinnied and ran up to the gate to greet us. Another first.

We went into the pasture and Merlin just wanted to say hello, cuddle, and get scratched. It was so special. He was very happy to see us.

Then the mare came up hard and fast and ran Merlin off. He ran the second he heard her coming as he knew what she was telling him. And then she ran off too. This is the first time I had seen this mare and she definitely did not trust humans.

It was very obvious that she wasn’t happy having humans in the pasture.

She was either trying to keep Merlin for herself as “her herd” and away from us or she was trying to protect him from “the humans”. I’m not sure which as I don’t know this mare, but it was obvious she didn’t really like people.

But, oh no! Merlin is my family and a part of my herd. And as herd leader it is my responsibility to protect him and make him feel safe. So that’s what I did.

I called Merlin to me and he started to come, but here comes the mare again to stop him. So, I picked up my reed and quickly shoed her away, protecting Merlin and making the statement to her that he is “mine”. They both understood that herd behavior. 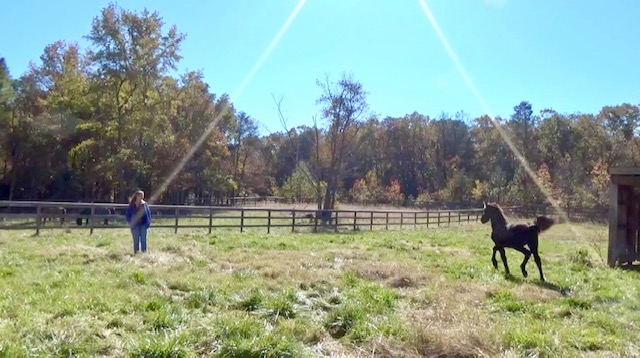 The mare just looked at me from the fence line and huffed, then she started grazing and could care less. It was a quick 30 second interaction which brought peace back to the herd. That’s my job…to keep the peace.

When we got back to my chair, Merlin was very happy to get scratches and love again. We sat down, gave him a flake of hay, and we all just relaxed together. He started licking and chewing and you could just see him relaxing. He was safe here with us and we were protecting him as a part of our herd, our family.

The three of us just enjoyed each other’s company for another hour or so and it was a very peaceful, pleasant session. Merlin was well behaved to both me and my husband and it was very enjoyable for all three of us. You could tell that he felt safe.

Before we left, I took over part of the flake that was left and gave it to the mare and she was happy to be included. She was doing her job teaching Merlin herd manners and I appreciate that. I wanted to show her that not all humans are bad and I appreciated her as well. She was teaching him natural “horse” lessons that I couldn’t, in a way that I couldn’t.

They both were eating and at their own spots in the pasture and were both happy when we left.

By doing this you actually relieve stress in your horse and in yourself which allows the time that you are together to be peaceful and enjoyable.