Trust is a large encompassing word.

But can you trust your horse…

In case of an emergency situation, do you trust that your horse will listen to you and not freak out?

That’s the real test, isn’t it?  Will your horse calmly listen to your requests in an emergency situation?  I want you to really think about that one.

Most people don’t think about this until it’s too late and they are in an emergency situation.  And then it’s too late.  They either have it or they don’t and the consequences can be devastating.

I was reminded of this recently when a student told me her recent story in the midst of really bad gale force winds on her farm.  She told me the storm was really bad and she was worried about the horses in the pasture.

Pat told me that there were a lot of trees in the pasture that the horses were currently in when the winds hit.  They were somewhat safe in the run-in shed, but she was still worried about all the trees.  They were 100-foot trees and they were very old.  They would have done some major damage if they were blown down.

So, she decided to take her two horses to a safer pasture.  She went out and quickly put a halter on one, took them out of the run-in shed, and walked them through a large patch of trees to get into the other pasture.

Pat got them both to the other pasture and the other run-in shed and then took the one horse’s halter off. Then all three of them stayed in the shed for a little while just watching the storm.  She then felt that they both were safe and she got herself safe inside her own home.

She was very pleased with how quickly and easily the whole process went.  Her horses listened, did exactly what she asked, remained calm, and there were no issues whatsoever.  Pretty simple in her mind.  And she didn’t think much of it until I played back the reality of the situation to her.

We had the same terrible winds here in Maryland too where trees were blowing sideways, large tree limbs were crashing to the ground, trees were making loud cracking noises as they were breaking or falling over, and the wind itself made a horrible howling noise as it came through.  It was scary.

My animals here at the house were also scared and I’m sure the horses in the barn were too.  These types of gale-force winds can cause a lot of damage.  Any animal naturally knows the dangers and will seek safety and hunker down until it is over.  It is their natural instinct to stay safe. 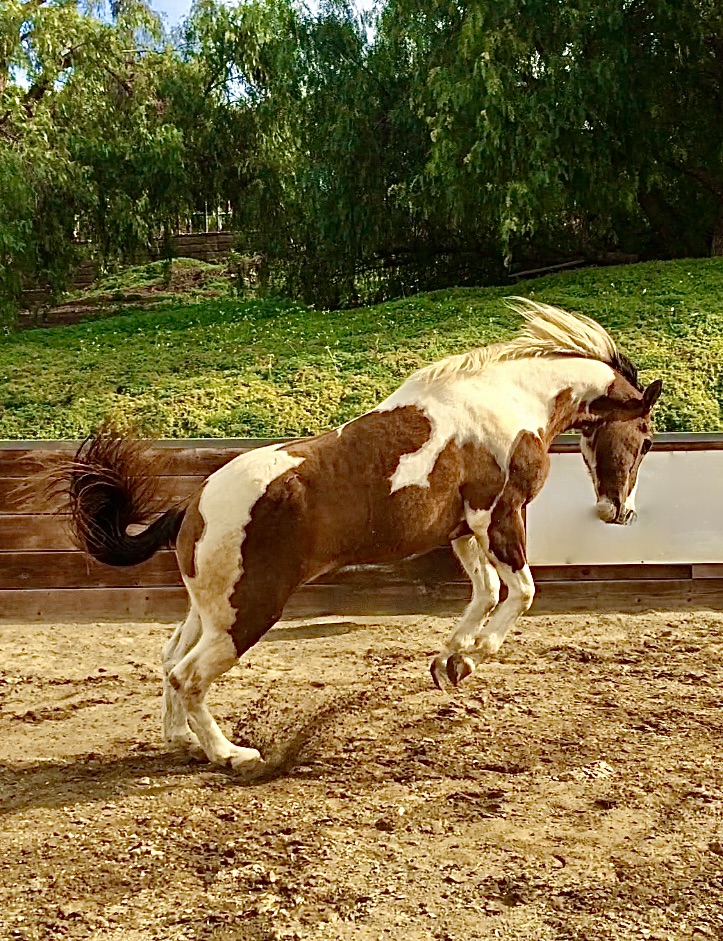 So, here is how I recapped the situation to my student…

Your horses were at a spot, the run-in shed, where they felt as safe as possible in that pasture.  Their natural instincts were telling them to stay put and stay safe.  Then you came out.

They had to trust you beyond belief to leave their safe spot for you.  Because for them to leave a place they felt was safe and follow you through an unsafe area and in an emergency situation was a big deal.

They had to go against their own natural instincts to not only leave their safe area, but they had to go through a wooded area which was dangerous and loud with the winds howling, possible branches falling, loud noises from trees cracking, and who knows what else.  Plus they didn’t know where they were being led.

They trusted you, and your leadership, to take them somewhere safer even though they had to go through an area that wasn’t so safe to get there.  Plus…

And don’t forget that the second horse never had any tack on and she could have freaked out, run, not gone at all, or worse.  But she didn’t.  She trusted you 100% that you would keep them both safe and protect them from the dangers surrounding them.

Then when Pat thought about it with that perspective she realized how much trust she had with her horses.  She could see how much they trusted her, but she also saw how much trust in them that she had gained as well.

They went against their natural instincts and trusted Pat’s leadership to keep them safe and did exactly what she asked.  Which of course, also kept Pat safe.  If she had tried to do all this with horses that were running around, scared, freaked out, and unpredictable, that would have put her at risk.

I’ve seen this firsthand as well when I had to evacuate my horses from fires in California.  Some horses at the stable listened to their owners, who they trusted, and went into a trailer without issue and were evacuated safely.

And some horses were too freaked out and didn’t trust their owners and they had to be let loose.  They couldn’t be haltered or they just ran away in fear. Some of them made it to safety on their own and others didn’t.

Don’t wait until it’s too late.  Work on a strong, stable, trusting relationship now.  That way in the future, if you ever are in an emergency situation, you and your horse will be safe.

Pat’s horses were not normally like this and they used to be spooky, unpredictable, and untrusting.  But that was before she went through my Personal Coaching Program and completed my RC3 process with her horses.

She was very surprised by how her horses handled this emergency situation and attributed their trust to completing my RC3 program.  So, if you would like this kind of trust with your horses as well, let’s talk.

Just book a complimentary call with me and we can chat about what you want and discuss what would be the best option or program for you and your horse.