I saw this video on Facebook and laughed so hard. Here it is below, so you can get your giggle on as well. This video definitely shows the will of this horse.

Every horse owner will have at least one of those moments when your horse does something that makes you scratch your head. It’s so different and something you would never have expected. Just like the Facebook video. You would think that fences would keep your horse in. That is until you found out he was a really good jumper.

Most of the time these “scratch your head” moments are something you can laugh at like the video. Here’s one of those moments for me. 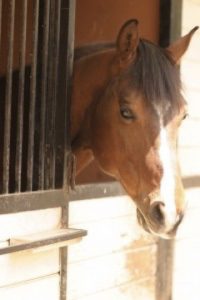 When Jazz was younger and I had him at a boarding stable, he kept getting out of his stall at night. I would come out in the morning and there he would be waiting for me at the front gate of the farm eating grass. This was before we had Apollo. So, it was just the two of us.

Luckily there was a fence around the entire farm so he couldn’t get out onto the road.

At first I thought someone was letting him out. This happened every night for over a week. I thought – my horse can’t unlock his own stall. It was a lock that you had to not only pull up over a clasp, but you also had to then pull it to the left to get the rod out of the clasp on the wall.

Let me just say that this was many years ago and was before YouTube. So I had not seen any videos of horses unlocking their own stalls.

I finally figured it out when he did it during the day and I just happened to be there. I saw Jazz use his lips to grab the latch and pull it up and then use his nose to push it to the side to slide it out of the wall clasp.

Pretty amazing. I was shocked that he had seen me do it so many times that he figured out how to do it with his lips. I knew he was smart, but this was surprising. And quite funny. He was so proud of himself when he let himself out and pranced over to me at the feed room. 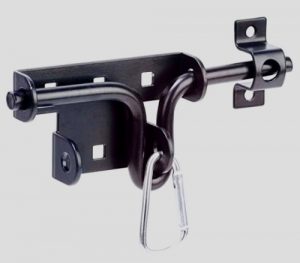 After that I had to put a D-clip on the bolt so he couldn’t get it up and open. He did try, over and over. Luckily he didn’t get out again and he stayed safe in his stall in the evening.

And you know, it must have been hereditary. When Apollo came along and was very young, he figured out how to escape his paddock. But this time it was different.

I had learned the trick to put a D-clasp on the locks, but Apollo was still getting out and the locks were still in place. This was really a head scratcher. It took me a few weeks to figure it out.

Apollo was young and small and he was in a stallion paddock with different size pipe corral panels on it. Panels that were designed for an adult stallion. They were taller than normal pipe corral panels so he couldn’t get out. However, that also meant they were a bit higher off the ground.

Yup! You guessed it. He went under.

He figured out how to crawl underneath the bars. Since he was still young and small, he could lay down and shimmy under the bars on his side. I’m not sure how he figured this out, but he did it a lot.

I never would have guessed this one. When he got out, he would go visit the other horses and of course the mares were his favorite. He was easy to catch and would run over to greet me when he saw me. He just wanted to visit his friends whenever he wanted. No harm, no foul. 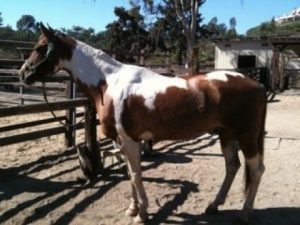 And every time I would find him, I swear Jazz was watching, saying, “yes, go for it”! He would root him on. It really was funny to see. I bet Jazz even coached him on how to escape. They both were very playful and creative.

The bad news is that the only way I figured out how he was escaping was that one-day Apollo became too big to fit under the panels. So he got stuck. Luckily I was there when it happened and was able to keep him calm as friends removed the panel and got it off of him.

From then on, he went into a pasture with Jazz, until he was gelded and they could share a barn.

Here are some suggestions:

Instinct is not a fixed quality. It grows and adapts. It changes. You and your horse are learning from your mistakes and your accomplishments. You must be flexible and fluid.

Only then can you reach your horse on his own terms, in his own world. This also allows you to be very observant to see what’s really going on in your horse’s world.
You’ll be able to use your instincts to open your mind more and see the whole picture.

This way you can fill in the holes and see what’s truly possible. See what your horse is capable of.

I’ve heard people say, “feel what your horse is feeling”, but let me take that a bit deeper.

Use your emotions not your feelings.

When you don’t understand what you’re seeing, listen with your emotions. Listen to what’s calling inside. Tap into your emotions.

This will also open up your horse’s world to you and allow you to truly see what’s going on with your horse.

Don’t put logical restrictions on the situation like I did when I thought “my horse can’t be opening his own stall”.

Using your instincts and your emotions will open your eyes to what your horse is doing in this new situation that is making you scratch your head. And hopefully you will laugh and have a magical bonding moment with your horse.

These moments have the potential to bring you two even closer together. Let it!