This week has flown by as I got a new puppy – a Bernese Mountain dog. He’s just the cutest!

He is only 8 weeks old so that means – integrating him with the current dog, potty training, and new feeding schedules. It also means getting up every 3 hours right now, so my sleep pattern has been drastically changed.

But it’s worth it. 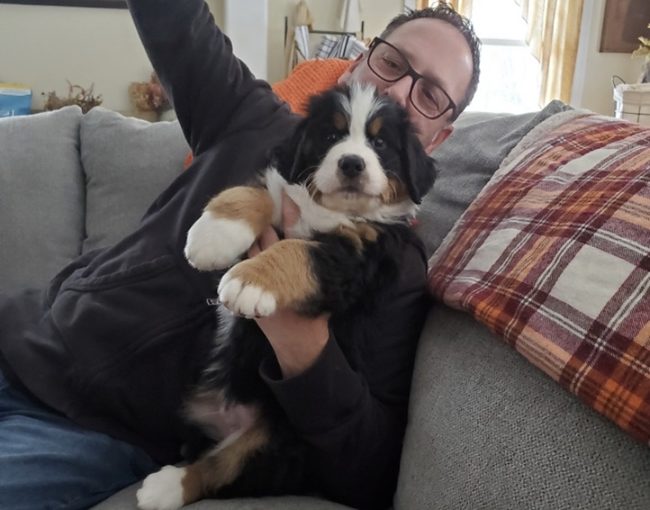 His name is Scooby-Doo and he is already 20lbs at 8 weeks old. He’s going to be a monster.

But other than getting a new puppy, I wanted to give you an update on the horses.

And just in time. Because Harry moves to another pasture on the farm with his riding buddy in 2 days.

Remember I told you that Apollo’s girlfriends were supposed to move in at the end of February and be in the pasture next to Apollo? Well, they aren’t coming to the farm for another month now.

So, to make sure Apollo isn’t alone and vulnerable so far away from other horses, he is moving into a different pasture with a mare he seems to really like.

He is a real lady’s man. Pretty good for a 30-year-old gelding. His new pasture mate’s name is Comet. He moves into her pasture this Saturday.

Even though they have talked and touched over a fence line, I put them together today for a short time to see how they would be in the pasture. Because horses can be different inside the pasture as opposed to being friendly over the fence line.

The test went well. They got along well for an hour or so and then I took Apollo out. Comet is definitely the mare in charge and is the dominant horse and Apollo is good with that.

Hopefully, this will be a better match and a better pasture for Apollo’s needs. I will let you know how it goes.

As far as the stallions, Kit and Danny are doing well. They have their own large pastures at the old farm with nice run-in sheds and barn stalls. These are the last two pastures that will be torn down on the property, so I have another 6-9 months to find them a new home.

Everything else on that farm has practically been destroyed and there are no other fences or pastures left.

They are doing really well. Once they get moved to a more permanent location, I will start training them to ride. Right now, my focus is on Apollo and getting him settled in. Then we will start trail riding again and exploring the other 100 acres of this ranch.

I hope you and your horses are doing well as Spring approaches, here in the U.S. I can’t wait for warm weather again and longer hours of sunlight to have more time with my horses.

Oh, and I can’t forget about Tiger. The barn cat that came home with me as winter started.

She is doing well. I found out from the vet that she is only about 3 years old and in great shape. She is very healthy for being a wild, outdoor, abandoned kitten. 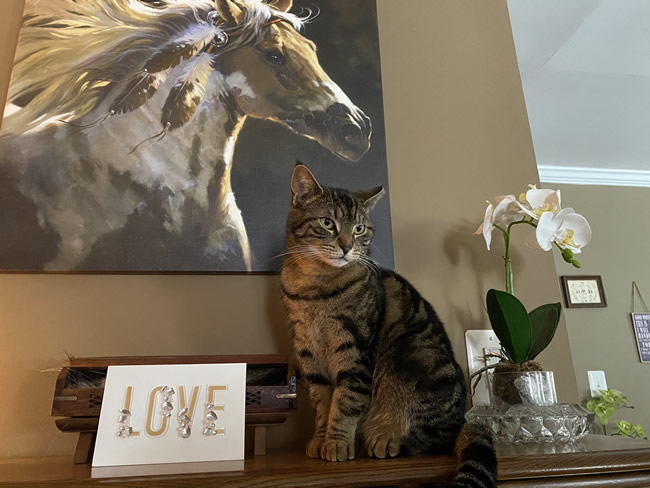 Tiger has been so happy to be an inside cat and she shows it daily. She cuddles with me in bed, right next to my pillow, and she follows me around the house just to get petted. She is so happy!

She gets along with my other two cats very well. There was a slight learning curve at first though. But now with the new puppy, it’s 3 against 1.

It’s so funny to see how the 3 cats will gang up together and act as one in order to get around the puppy and even distract it from one of the other cats. But all 5 of them get along very well (3 cats and 2 dogs).

One last thing to report – the Koi in the pond have done very well through this harsh winter of snow and freezing rain and sleet. They have even grown. The last time they peeked out from the foliage, they seemed to have doubled in size.

And there were 2 babies that I saw!

Life goes on, even in the coldest of winters here. I haven’t seen any of the frogs or ribbon snakes yet as they are still hibernating. And the birds and squirrels have been doing great as well.

I love my menagerie of animals at the house. By the way, we have a few families of deer and Canadian Geese at the farm where Apollo is now and it’s lovely.

I’d love to hear any stories you have of your fur family and how they all are doing it in the Comments below.