With the social distancing guidelines here in the US, I’ve been grateful for the ability to talk live with a lot of my students and friends over the phone, Zoom, and Google Duo.

Like most of my conversations, the first thing I ask is …

So far, I have always heard, “Yes I’m fine” as the normal answer.

However, yesterday I heard an answer that really stopped me cold and I didn’t know how to respond.

My friend said, “I don’t bloody well know!” (in a serious tone and a beautiful British accent).

Wow, that got me thinking. Many of the things we say sometimes are out of habit and when we don’t hear what we are expecting, it takes us back a bit. After that, what my friend heard from me was,“uhhhhhhhhhh” and silence for a second or two. When I was able to recover I said, “what do you mean by that?” I was definitely intrigued and wanted to know more.

Then he explained further by saying, “Some days I’m better than others.” Then we got into the discussion a bit deeper about why he said what he said. Physically he was ok, mentally he was a bit frustrated and spent, and emotionally he was definitely NOT ok.

My friend told me that he had been in isolation with his wife and 3 kids (under the age of 13) for 3 weeks and he was about to go crazy. He was now questioning so many ideas about parenting that he thought were set in stone.

He loves his children dearly and has always been a great father, but his limits were now being pushed and he was rethinking his views on parenting. He was used to going to work from 8-5 and coming home to a quiet, peaceful family at night and spending a little quality time with the kids and then going to bed.

Now, he was with the kids ALL day, every day, and he was seeing so many things he never knew happened with his children. So many things that his wife always dealt with and handled on a regular basis that didn’t require his input. He was also realizing that his way of handling situations with the children’s discipline was a bit different than his wife’s.

Some of you may know exactly where he is and what he is talking about.

The conversation then went to children and boundaries and how his kids have been pushing the boundaries too much, in his opinion. Staying in with the entire family, stuck in the same house all day without a whole lot to do, the kids seem to really be pushing their limits and boundaries. He felt as if they were thinking all the time about how to push and test the limits of every rule he tried to lay down.

He said it was like an old skit he remembered by Comedian Bill Cosby – When he tells the kids, “Don’t do that”, and the first thing they do is to do the exact thing he just said not to do. Then they do it again and again while he is watching them and saying “don’t do that”. My friend was just frustrated with the whole new situation and couldn’t figure out as a father what to do.

Here’s the skit my friend was referring to…

Come to find out, that my friend believes in strict boundaries and rules and his wife believes in giving the children all the freedom to do whatever they want, without any boundaries, as she wants to be seen as more of a friend than a mother figure.

So, you can imagine the chaos in their house right now.

I told him of a story I had heard that explained how children learn by “testing the boundaries”. The story basically said that when children are learning, for instance, to stand up that they will sometimes try to stand up under a table. We know what is going to happen but they do it anyway and go “bang” with the top of their head.

The story says that they will only do that about twice and then they realize that the table is a boundary, an immovable object. It is a wall that doesn’t move and they find another place to stand up as there are hundreds of other ways to do this besides under a table. This is an example of experiencing the freedom to learn on their own.

However, my friend wants to help his children learn from his teachings, without having to go through the pain of hitting the table with their heads. So, he tries to stop them before they do it by telling them not to do it. But, it doesn’t always work as they don’t always listen.

I can definitely see both sides of the coin in this example.

I have also read research that show that if parents have the proper balance between boundaries and non-boundaries (chaos and order) than the children will not only learn more effectively, but it will also give them the confidence to play.

Hmmmm, PLAY is associated with chaos and order.

Supposedly, play can only come out when there is a balance between freedom and boundaries. A happy medium in discipline styles.

So, my friend and his wife are learning, the hard way, that a child’s way of learning is to push the limits. I’ve heard this called “The instinct of transformation”. Children have a natural instinct to grow and learn and they learn by paying attention and trying new things.

It was a fun and interesting conversation, especially to hear the amusing stories of what his children were “getting into” during their isolation at home. They all were learning how to deal with a new situation as the routines have now been disrupted.

That same day, I spoke with one of my students who told me how her horse kept jumping the fence at night and ending up in another pasture with other horses the next morning. I instantly reflected back to my conversation with my friend and his kids.

I could see a lot of similarities.

My student said that her horse was alone in her pasture and she was at a boarding stable. She also told me that she only boarded for a few months every year and the rest of the year her horse was in the backyard at home with her. 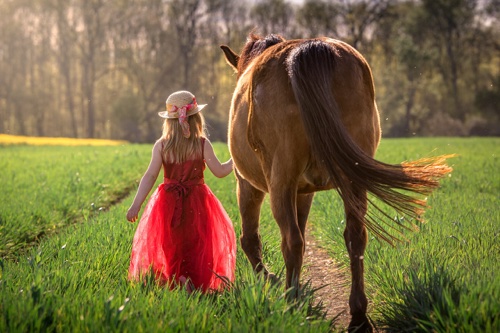 She and her horse usually have a good relationship while at home together, but they also have a routine and there are certain rules and boundaries. But now that her horse is in the boarding stable, routines have been disrupted and things aren’t quite the same. The relationship has taken a hit too and isn’t quite as good. They just aren’t in sync like they used to be at home.

Let’s look at what her horse might be possibly thinking…

“Oh boy, a new place to run and play. But I’m alone in this pasture and mom is not here like when we’re at home. Hey, there are a lot of new other horses around. I want to play and be a part of the group. Mom’s here, can you take me over there to that horse? Can we check out the new patches of grass over there? Can I go play with those horses? Mom, why won’t you take me into that pasture to play with them? But I want to do something else, Mom. There’s all these other horses and things to do here, Mom. Never mind, I’m going over here Mom with or without you!”

You can just hear the boundaries being pushed and tested, can’t you?

That’s part of how horses learn too. Plus, a balance of order and chaos is a way they learn to have confidence in themselves and their surroundings in order to play.

So, this wonderful, intelligent, and playful Haflinger mare had decided to push the actual boundaries and jump the fences at night to get in with the other horses she wanted to play with. Her owner tried to switch pastures twice thinking that she wanted to be in a different pasture. She was right…she just wanted to be in the “right” place for her.

Once she was moved to a spot in the middle of the action and she could watch people coming and going, horses moving around, had her “friends” right next to her, and she felt safe and protected, then she was in the “right” place for her. This was her horse’s balance.

Plus, Mom was now playing with her more, setting new boundaries as to what was acceptable and not acceptable in this new setting, and was allowing her mare to have a voice in what they did and where they went. They both are currently working on a mutual partnership and having a two-way conversation that is mutually beneficial for both of them. Basically, learning to be a herd again in this new setting.

Relationships are always a give and take, push and pull. And when a new setting or situation comes into play, the boundaries and rules sometimes need to be adjusted and changed in order for all parties involved to be happy.

This goes for parents and children finding themselves in isolation together for a long time as well as humans and horses in a new environment.

Boundaries are important and so is having the freedom to voice opinions, desires, and needs. Working together to find a solution to the issues, in my opinion, is the best practice to build a strong, long-lasting relationship.

I’d love to hear any funny stories you may have about this subject and what your horse taught you.