Well, it has been one of those weeks. My two dogs were playing in the backyard and the puppy yelped. And here comes Scooby whining and limping pretty badly over to where I was sitting. The dogs weren’t doing anything too rough and nothing other than just playing. So, I wasn’t sure what had happened.

Arlo is a 2-year-old rescue “mut” who is full grown at 49 pounds. He is very athletic and quick and loves to run and play. He really loves his baby brother. Scooby is a little over 5 months old and 85 lbs. He is a purebred Bernese Mountain dog, puppy. He is growing up fast and loves his older brother and imitates everything he does. Which is funny since Scooby is so much bigger than Arlo now. The vet thinks Scooby will grow to about 180 lbs. 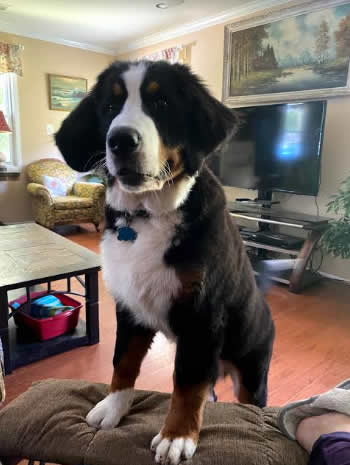 I checked Scooby out, no blood, no open cuts, but he was still limping and whining. Poor Arlo looked like, “I’m sorry mom, I didn’t mean it.” So, he knew he did something he shouldn’t have. You could just see it in his face and demeanor.

I called the vet and made an appointment for the next day and took him in. They did x-rays and found that he had hip dysplasia in both of his back hips and felt that he would need cruciate repair surgery on the left side, which was worse.

However, the vet said this was not caused by an injury but that it was a hereditary illness that is common with this breed of dogs. She said it was a birth defect. I knew this breed had hip problems but thought that they came on with age. I was surprised that it showed up at 5 months old. Before we go for surgery, we will get a second opinion just to make sure though.

It turns out that Scooby’s hip socket is so shallow that his hip joint can easily be popped out with very little effort and cause pain and swelling. And that is exactly what happened when he was playing with Arlo. In playing around with each other, Arlo accidentally pushed something, and Scooby’s hip came out of joint.

The good news is that Arlo didn’t really hurt Scooby and that we found out about this illness early and can do things to help him as he grows. If anyone has any suggestions that could help Scooby heal, I would appreciate the help. I’m much more knowledgeable about horses than I am about dogs.

Speaking about horses, after this adventure with Scooby, it reminded me about an incident with my horses. One of those accidental, oops moments.

One of the days I was sitting out with Jazz, Apollo, and D’Artagnan in the pasture. Everything was going smoothly and quiet and out of the blue, D’Artagnan decided to go after Apollo. He attacked very quickly moving forward and biting at him. The he turned around and double barrel kicked at him. At first glance it looked like a warning shot, but unfortunately one of his hooves caught Apollo right in the neck.

Apollo had reared up quickly to get out of the way and turn around to run, but he wasn’t quick enough. But once Apollo got away from D’Artagnan, he calmed down and ran back to the fence line. I ran over to Apollo to check him out as I saw the impact. Luckily Apollo was ok, no blood and no open wound, except he had a dent in his neck where the hoof had caught him. It was strange. So, I called the vet out.

The funny thing, just like the look on Arlo’s face when he realized that Scooby was hurt…D’Artagnan had that look too when he realized Apollo was hurt. I honestly think that D’Artagnan was not trying to hurt Apollo and that it was supposed to be just a warning shot. It was an accident that he actually had contact with Apollo. 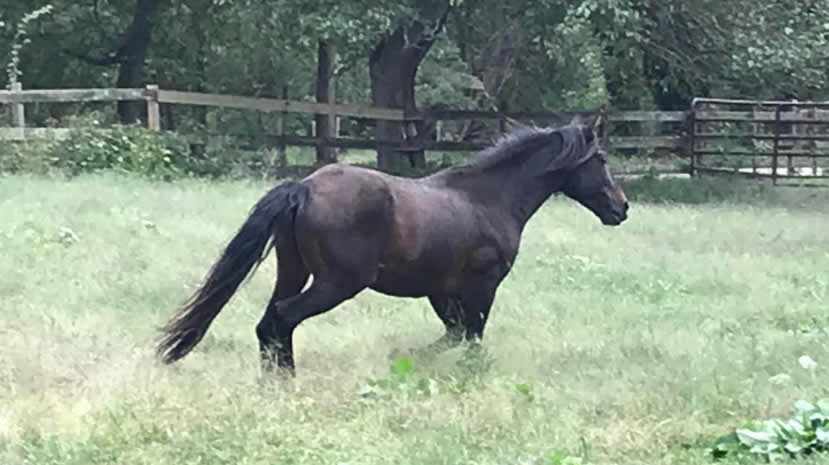 Once D’Artagnan realized there was something wrong and I was with Apollo checking it out, D’Artagnan came over to watch me, had his head down, and looked very apologetic with his eyes and his demeanor. Just like Arlo did with Scooby.

The vet said he hadn’t seen anything like it either, but that Apollo was fine other than having this indentation in his neck. So, no real damage on that kick, thankfully.

After the vet had left, D’Artagnan came over to me and Apollo very slowly with his head down and just stood there being close. Then he started to nuzzle me and Apollo very gently as if saying, “I’m sorry”. He was so sweet and gentle.

Even though dogs and horses are very different, it was cute to see in this one instance how similar they are when they accidentally cause injury to another animal. They both knew that they had hurt another horse/dog/friend and they showed sympathy, compassion, and genuine concern.

When we brought Scooby back from the vet, Arlo was so sweet, careful, and extra gentle with him. It was so sweet to watch. Both D’Artagnan and Apollo and Arlo and Scooby love each other as family. And it is so clear when you see them together.

Have you seen this type of love and compassion with your dogs or your horses? I’d love to hear about your story in the comments below.