Last week I told you how my business partner and friend for years, Mark, came out from Germany to visit and even though we had never met before, we hit it off right away.

And after spending quality time together and doing a lot of talking, it pretty soon felt like we were family…

In horse parlance, we became a herd!

The expression I use about why hanging out with your horse is so powerful in creating an amazing connection is:

Here’s a story that shows why I not only feel this way, but why I know it to be true! 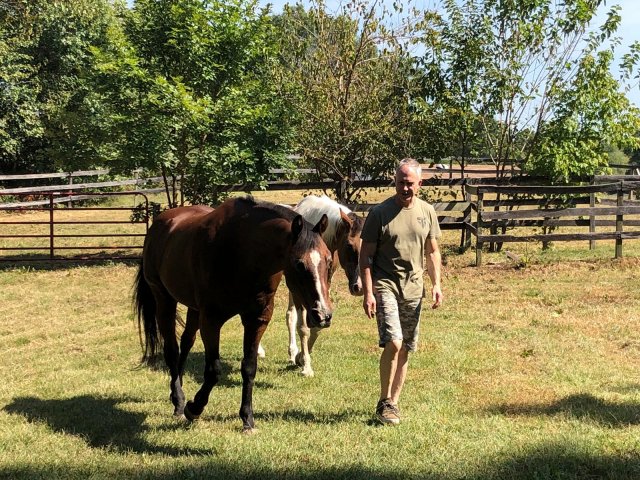 I have had my paint horse Jazz for practically his whole life and he is now 33. He’s the Paint in the picture above.

His son Apollo (the bay above) is now 29 and as you can imagine, the two of them are very close.

Jazz and I have been together since he was just over 1 and apart from the time when Apollo was stolen, Apollo has been with us his whole life.

I then acquired another, younger, larger Andalusian gelding called D’Artagnan who was only 9 at the time of this story, but he still thought he was a stallion.

To begin with the 3 of them did not get along and I had to be very careful about how and when I let them spend time together.

D’Artagnan was very big and dominant and he liked to push Jazz and Apollo around. Jazz was very jealous of the time I spent with D’Artagnan and he would push back whenever he got the chance.

When I relocated from California to Maryland, it was a simple matter of me hopping on a plane, but for them it was a 6 day road trip cooped up together in the same trailer.

It sounded like a recipe for disaster given their history, but I had no choice.

I would love to have made the journey with them to keep the peace, but it just wasn’t possible.  So, I got the best transport I could, one which had been highly recommended by a few friends.

Since I was worried about how the three of them would react during the trip, I called the transport trailer driver every day.

And each time I called the driver was very calm and told me they were all fine, but I have to admit I still had my doubts.

I knew the driver to be kind, compassionate, and a great horse woman, but I doubted how my horses would be able to put up with being in such close proximity to each other for such a long time.

Eventually, the trailer arrived in Maryland and I was so happy to see my three boys again.

I couldn’t wait to get them out of the trailer and into the pastures to see how they were and if they had any injuries or scrapes due to fights or scuffles during the trip.

Remember, anytime they had been near each other before the trip, they would fight. And because of this, they couldn’t be put in a pasture together or even close enough to share a fence.

But, I wasn’t at all prepared for what happened after we unloaded them and let them loose in a pasture.

Sure, they were all excited to be able to run around freely again.

And yes, the abundance of grass must have made them giddy with excitement following life in southern California, with its very limited amounts of grass.

No, what surprised me was that they ran around together – as a herd. No fighting, no pushing, no drama.

That 6 day trip spent in close proximity to each other had transformed their relationship together. They went from not liking each other to being family – to being a herd!

If I needed any more proof of the fact that “Familiarity breeds connection”, this was it.

However, for a horse, some social contact is better than no contact and making use of what I call the Equine Loophole can certainly help you rebuild your relationship with your horse and allow you to connect with your horse in a much deeper, more meaningful, way. 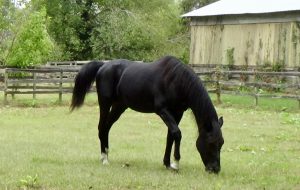 By the way, if you’ve been following along with the progress of my new stallion, Kit, he is eating well, is very healthy and looking great.

He’s gone from being good at bath time – see https://teddiezieglerhorsemanship.com/science-intuition-and-bath-time/ – to now working well with the farrier.

Yesterday I took him out of the paddock that he’s been in for the last 3 years and moved him to a pasture with lush grass.

He loved it and ate for about an hour, but only if I stayed around him though. I tried to walk away and go do some work, but as soon as I did he ran the fence to follow me.

All of which means he’s beginning to bond with me and trust me from all the time we have spent together and is also now starting to look to me for safety.  All great signs that he’s beginning to connect with me now at a deeper level.

I also found out that his lineage can be traced back 3,200 years to the original line of Egyptian Arabians and there are only 5 homozygous black horses in this lineage alive in the world today.

You really should see him, he’s quite the movie star! 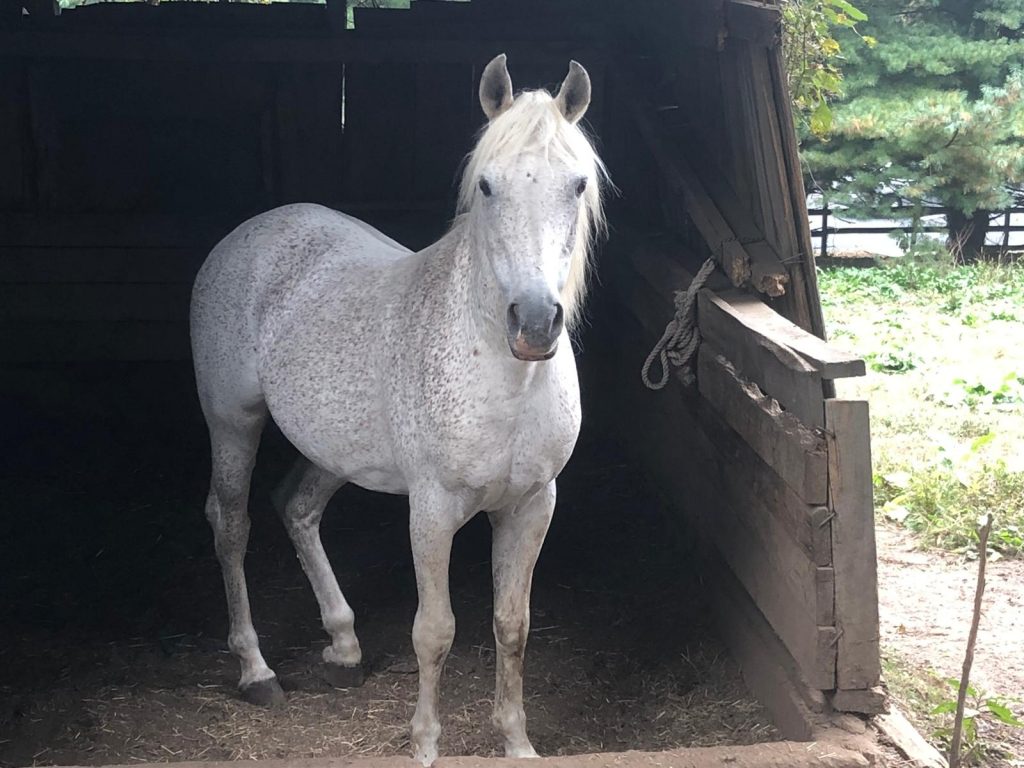 I have also gained access to another Egyptian Arabian called Danny Boy, a flea-bitten gray, who doesn’t quite have Kit’s film star looks but is pure poetry in motion! Let’s say he’s Rudolph Nureyev to Kit’s Rudolph Valentino!

And you’ll be pleased to hear that I am going to be producing a free video training series on working with these 2 beautiful stallions, so stay tuned for more news on these stars in the making!

Until then and as always, I wish all the best and Happy Horses!