Why I strive to help give horses a forever loving home

A couple of years ago I was hanging out with my horses when a friend called and I was telling her about this guy I hadn’t seen in 35 years who’d called me up out of the blue and asked me to lunch in LA. I told her I didn’t want to go as it was a long drive and I had no idea what this guy would be like after all these years. 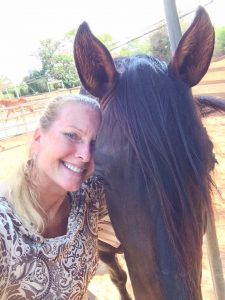 She told me that I should go and at the same moment my youngest horse D’Artagnan pushed me in my back with his nose. I laughed and told her that I thought my he was agreeing with her and was telling me to go. At which point he nudged me again as if to say, “Duh, yes go Mom!”

I hung up the phone and said to D’Artagnan, “So you really think I should go all the way up to LA to meet this guy, do you?”. He looked at me for a moment and then shook his head up and down as if to say “Yes!”.

That lunch was my first date with my new husband Mark.

12 months later and my 3 horses and I had made the 2,650 mile journey from southern California to Maryland to all set up home together. When I asked the horses about the move, it was D’Artagnan who was the first one to get all excited, nod his head up and down again, and act like he was all for the decision.

Ultimately it was his joy and excitement that pushed my decision to agree to get engaged and move to Maryland. And as crazy as you may think I am, if any of my boys had seemed hesitant or I’d felt a “no” from them, I wouldn’t have done it.

Was it the right decision? 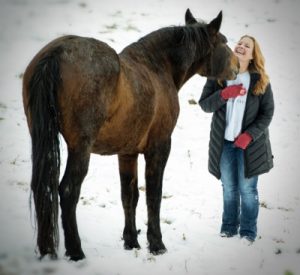 Absolutely! I have a new husband and my boys love the green, green grass here especially after the dryness of south Cali, even if the winter snows were a bit of a shock to them at first!

Last Sunday was typical of the joy we experience here. We had a fun day of walking around, grooming, playing, and I even managed to shoot a video for a new lesson. We had a great day and I tucked everyone in before returning to the house at around 5 pm.

The next morning, I went down to the barn at 8 am, walked in with a big smile as usual, happy to see my boys again only to be greeted by the sight of my beautiful D’Artagnan lying dead in his stall.

If you read my email from last week you will know that he had been suffering from a cold but the vet had been back out again on Saturday and declared D’Artagnan was doing great and back to his normal self.

And on Sunday he was running around, doing all his normal stuff, no fever, and eating and drinking just as always, so you can imagine my shock to see him lying there lifeless on Monday.

I immediately called the vet who rushed over. A preliminary examination revealed blood in his nostril and the vet thought D’Artagnan had probably suffered an aneurysm and dropped down dead on the spot by the way he was lying.

He said it may have even been a birth defect but either way, he reckoned it had probably happened in an instant without distress or pain. I hope I go that quickly.

So as painful as it is, with a heavy heart and buckets of tears I felt I had to tell you of the passing of my beautiful and precious D’Artagnan. He was not only my heart-horse but he was also a very special member of my family and this has been a devastating week for us.

I’ve never lost a horse before as Jazz is 32 and his son Apollo is 28 years old. I never in a million years thought that my 10-year-old would pass first.

You never know how much time you have, so we must cherish every moment with our nearest and dearest. Whether fur or flesh, they are all family to me, we are all one herd.

There is an old Scandinavian tradition of letting go of a passing soul and allowing them to be released and move on to the next place. It also is a gesture of letting in the soul to pass through the house and say goodbye to anyone there, along with bringing in fresh air from the outside and the promise of another day.

So when I got back to the house I opened up all the windows and doors to respect this tradition.

I’m pretty sure I’d have still been there now if it wasn’t for an expected visitor who showed up a little while later. 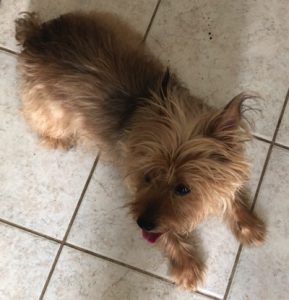 A Yorkshire terrier I had never seen before came in the open front door and came right over to me wagging his tail, jumped in my lap and started licking my tears away.

It felt like a sign from D’Artagnan telling me he was ok and thanking me for all the love he’d received from me after I rescued him.

It definitely helped my heart a little. This little ball of fire and love was just what the doctor ordered.

Once I calmed down I realized that I needed to help him get home and so we went outside and started walking around the neighborhood in the hope that my little friend would find his way home.

About a mile from our house, he recognized his own house and ran as fast he could to his Mom who was thrilled to see him again as he’d never been outside the backyard before.

I was grateful too that somehow that little pooch knew I needed a hug and some reassurance and he came to my rescue. Returning the favor was the least I could do.

Looking back, I realize that even though I rescued D’Artagnan from an abusive situation and gave him a forever loving home, he also rescued me because without him I would never have gone for that lunch and never have moved to Maryland to be with Mark.

D’Artagnan was going to be put down because his human thought he was too dangerous to be around when all he was trying to do was communicate.

It just broke my heart to see what almost happened to this gentle, loving, and talkative horse and I don’t want to see that happen to any others.

D’Artagnan is the reason I decided to share my program online to reach more people around the world. I want to help more horses like him get the loving forever home and the best human partner they deserve.

I finished editing the video above using some of the footage I shot on Sunday as a way of taking my mind off the pain. It was originally intended to be part of a new introductory program I’m putting together but felt I had to share it with you as it so clearly demonstrates my love and bond with my D’Artagnan.

He was a blessing to me and my life in so many ways. He will be tremendously missed and always remembered.