When Merlin was about 6 months old and he came into the indoor arena for the first time, he ran around having a blast. But when he got to one of the mirrors in the arena, he just stood there, snorted, and looked into the mirror as if it was another horse.

He then proceeded to inspect the mirror intently, looking around it and behind it and touching every aspect cautiously. Then he just went back to having fun and running around some more as if there was nothing to fear from the mirror. He did look back at it quite often and ran back and forth to see if it was another horse he could play with.

Now, one year later, he pretty much ignores the mirrors. I say pretty much because he still will go check them out at least once or twice when he’s at liberty playing.

Even this past week he still looked over at the mirror when he passed it while lunging. He’s not afraid of the mirrors and he doesn’t spook or stop during his lessons. He just looks over and keeps going as if he’s saying, “oh yea, it’s just me.”

But truthfully, I can’t tell 100% if he recognizes himself in the mirror or if he thinks it is another horse. I have my suspicions. 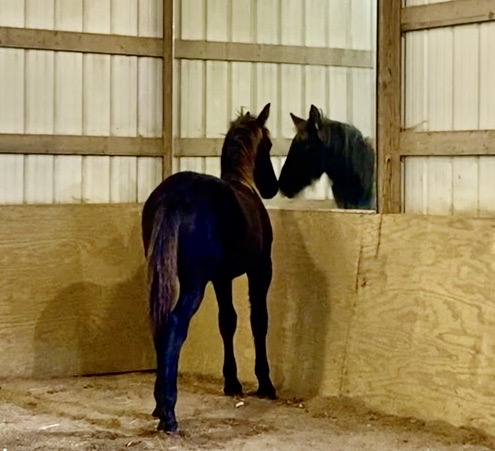 This is what I’ve noticed.

With another horse that passes his stall, pasture, or the arena when he is at liberty:

With the mirrors in the arena now:

So based on what I have seen in Merlin at age 6 months with his first encounter with mirrors to now, one year later, I would have to say that I think that he is self-aware and knows that the reflection he sees is himself.

Thinking back on how Apollo, Jazz, and D’Artagnan reacted to mirrors I can’t remember any reactions other than curiosity and a slight caution. But I didn’t really think too hard about it as there was never a bad reaction. And I didn’t analyze any of their reactions like I’ve done with Merlin.

But I have seen other horses spook at mirrors as they rode past or refuse to get close to mirrors because of fear. I’ve even seen horses hold onto this fear of mirrors for years. So do they think it’s another horse or what? 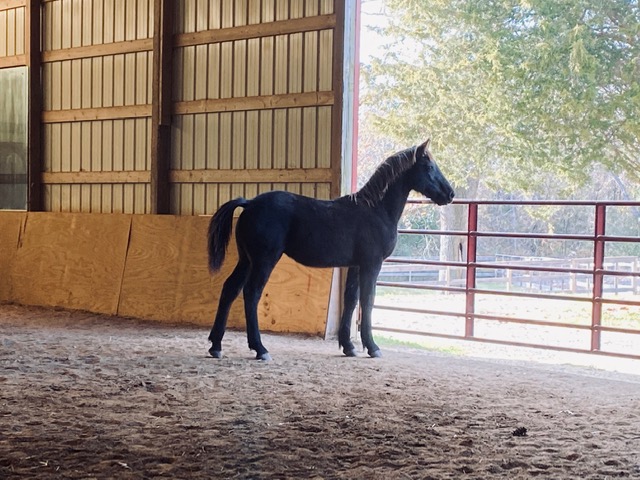 They all agree however that at a horse’s first encounter with a mirror they all think and react as if it is another horse. But for the most part, the studies have also concluded that a horse does not recognize the mirror image as his own reflection. He continues to think that it is another horse.

I definitely saw that reaction in Merlin when he was 6 months old and experiencing a mirror for the first time. He ran up to it as if it was another horse. He snorted at it and expected a response. And he would stand at attention and make noises at it and even tried to look behind the mirror to see the rest of the horse. There was no doubt that at first, he felt it was another horse.

Studies have been done on the psychological effects of having a mirror in a horse’s stall when they are isolated and not in a herd environment. Having a mirror in the stall has been shown to reduce a horse’s stress level, calm them down, and lower their heart rate. Thereby inferring that the horse feels that the mirror image is actually another horse.

However, after a few months, these same horses will go back to being anxious as they’ve become used to their reflection.

These studies also show that mirrors work best on horses that have not been socialized well or are alone most of the time. Horses being herd animals, as everyone knows, means that they like being around other horses.

However, they don’t always get the chance to be a true herd animal. Sometimes, they don’t like the horses they are put in a pasture with, they have to be separated for medical or stallion-related issues, or their owner only has one or two horses living at home. Just to name a few.

But even if your horse is in a pasture by himself he is not alone if he has horses on the other side of the fence line. Having other horses on either side of the pasture will give him the feeling of being in a herd and allow proper socialization. Especially if they can touch over the fence.

Having a mirror around has been shown to help horses that are anxious or stressed because they get to be with a horse that doesn’t hurt them, doesn’t fight, doesn’t eat their food, and is the perfect companion. But that’s if the horse thinks the mirror is another horse.

Unfortunately, there are times when a horse will attack the mirror thinking it’s another horse and that just defeats the purpose altogether. Plus it can be dangerous for your horse if the mirror brakes. However, there are acrylic mirrors available that are safe for stalls.

There was a recent study done in Italy using marks on a horse’s cheek that concluded horses do have self-awareness and are able to see themselves in a mirror. They said that when the horse first looked at the mirror they did think it was another horse. This is consistent with other studies.

I tend to agree with this most recent study and feel that Merlin is aware that the image he sees in the mirror is his own.

So why are some horses afraid of mirrors? I think they are still in the initial stage where they feel the image is another horse.

Horses that are afraid of mirrors could be afraid because:

One way to fix this could be to add an acrylic mirror to your horse’s stall so he gets used to his own reflection and give him a few months to get used to it. Then eventually, when he goes into the arena it won’t be an issue when he rides past a mirror. He will be self-aware enough to know it’s just a reflection of himself.

Personally, I think that most horses are smart enough to recognize themselves in the mirror after they have had time to inspect it and think about it. Especially when they are given time with a mirror to really figure it out and process the experience.

At first, I think they all feel it is another horse. But after some time, you can see a point where their self-awareness kicks in and they realize it’s them in the mirror and not another horse.

It’s so fun to watch horses learn and process new lessons in the human world, like what a mirror is and how it works. A mirror is definitely a foreign object in the horse’s natural world.

What has your experience been with your horse and mirrors? Do you think your horse is self-aware or does he think that the mirror is still another horse? I’d love to hear your thoughts on this subject. Please leave your comments in the section below.

For everyone in the United States, I hope you had a wonderful Thanksgiving with your family and that you have a safe and warm holiday weekend.

Until next week, Happy Horses!