During the last month or so it’s been so hot and humid here that I’ve been a bit lazy and instead of taking the stallions out to work in the covered arena or the grass arena, I’ve just gone into their pastures and just hung out for the most part.

It was just too hot to run around or work out in the sun. The horses seemed to enjoy the break and the downtime together just “being” instead of “doing”.

This past spring, I worked on socializing both stallions and we had a lot of fun together. We also did a lot of work together. The training was very successful. But I also had good weather to be outside and to take the horses out and around the farm. 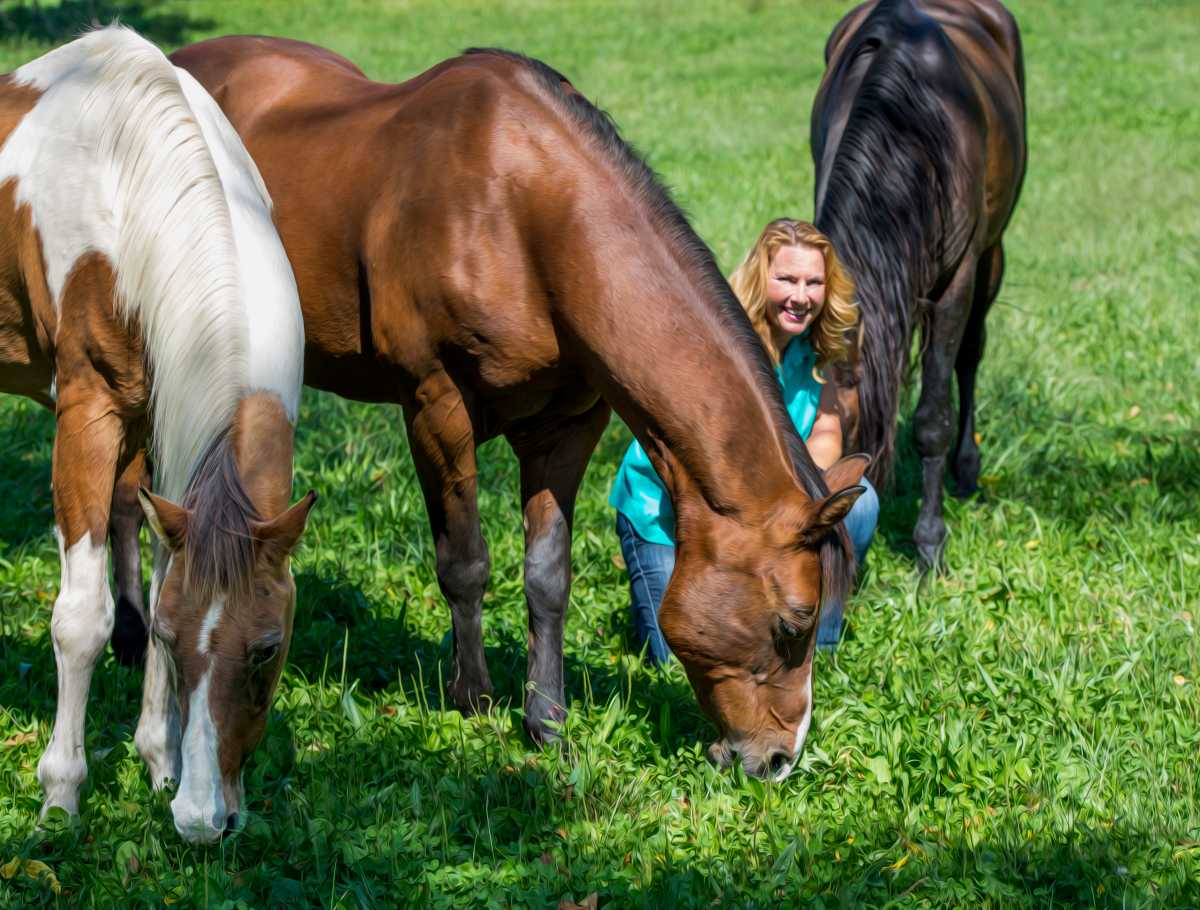 After socializing the stallions, my next step was to train them to be able to ride. Neither one has ever been backed or had any training towards being ridden. My plan was to do that training this summer.

However, this summer has been a really hot and humid one and there’s been a lot of rainy days. I kept waiting for a nice week or a few nice days so I could take the stallions out to start their training. Needless to say, it has not happened yet.

In the last few weeks, we have gotten so much rain that the stallion pastures have become extremely muddy, along with having puddles of standing water. And of course, the puddles are in the horse’s favorite spots to stand. Plus, we haven’t had enough sunny days in between to dry them out.

So, I decided that I had to take the stallions out of their muddy pastures and place them in the barn stalls until the pastures dried out. I really didn’t think this would be a big deal, but…

As I talked about in last week’s blog, I worked out a plan of action before just going into the stallion’s pastures. I looked at how I would take them out of their pastures, as I had to get in and wade through the deep mud and get them out safely since the deeper puddles were right in front of the gates (of course).

I also had to get the stallions past the new large chicken coop and run that has 23 chickens and 3 large turkeys in it. Even though the stallions can see this from their pastures and the chickens are allowed to roam the farm during the day, I still wasn’t sure how the horses would respond as we walked by.

I decided to take Kit out first since I had seen some of the free-roaming chickens in Kit’s pasture a few times and I thought he would probably be used to them and be ok as we walked by.

There were two ways I could go by the chicken coop – one was shorter but had less space between the chicken coop and the barn wall. That meant that the horse would be closer to the coop when walking by and if he started to act out, I would have less space to react and keep safe.

But, since I thought that Kit would be calm and would be ok around the chickens, I thought the shorter path would be fine for Kit. 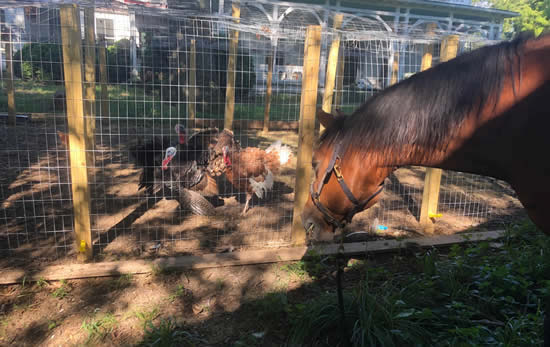 The long way around was through the backyard, close to the house and a few of the old outbuildings, down the driveway past the mare’s pastures, and then back around to the front of the barn. This seemed to be the safest way to take Danny past the coop since I thought he would be too frisky around the chickens.

Or at least that was the plan in my head…

Here’s how it actually went…

I opened Kit’s gate, slipped in the mud and almost landed on my butt, and Kit ran over as I caught myself. I was holding onto the open gate door, standing deep in mud. I thought Kit would try running past me to get out. But he was so cute and just looked at me like, “can I help you mom?” And he stood right next to me, even with the gate open.

I had the halter in the other hand and Kit just put his nose in the halter and helped me put it on since I was unstable in the mud. He was more than ready to get out though.

I aimed for the short path, which was closer to the chicken coop, but oh no. Even though Kit was calm and sweet at the gate and going through the backyard, it was obvious that he didn’t want anything to do with the chicken coop.

Once he realized we were headed in that direction, he started to get nervous, started to crow hop, and looked afraid of the chickens. That really surprised me as he has always been the more reserved stallion. So, I made a quick adjustment and we headed around the long way.

The whole time we were walking, well I was walking and Kit was hopping, he was still watching me and was looking to me for protection. It surprised me that he was so afraid of the chickens when I knew the chickens had been in and out of his pasture for weeks.

We walked by the mare’s pastures, said hello to the girls, walked around the farm a bit, and then went to the barn. Once we were in the barn stall, Kit actually nuzzled into me, gave me kisses, and just could not hug me enough. I was shocked at how happy he was because it seemed that he was “over the top” excited. It felt as if he was just saying “thank you” over and over.

After some quality time with Kit and some scratches and grooming, I went to get Danny out of his pasture.

Now, I was a bit on edge as Kit is normally the quieter of the two and Danny is usually over the top high strung. So, if the quiet one was uptight, who knows how crazy the high strung one was going to be.

I was expecting a real problem getting Danny out of the pasture and getting him past the chickens and the turkeys. Much less through the mud and water at his gate. I was really not looking forward to this interaction and I’m sure it showed in my body language.

I went over to Danny’s pasture, took a few moments to breath and relax, and then called him over to the gate. I placed the halter on him from the other side of the gate, opened the gate, and then out popped Danny, literally. He jumped up and out through the gate with lots of energy and then just stood there looking at me as if to say, “cool mom, what’s next?”

He was a perfect angel. Surprise, surprise! 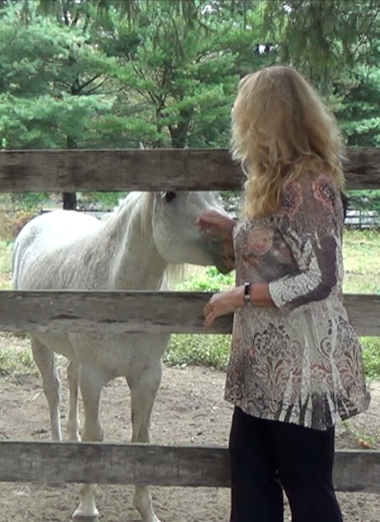 He just waited for me, walked patiently and calmly with me, and actually headed down the normal pathway to the barn – the short path. As we walked by the chicken and turkeys, Danny just looked over at them and then looked at me and followed me right into the barn stall without incident. It was as if we had done this a million times.

Once we were in the stall, Danny did the same thing Kit did when he got in the stall. He just scratched his head against me and showed me how happy he was to be there. That made me really think about why the horses were acting so excited and happy to be in the barn stalls.

I think it was all of the above, but most of all – I think it was that they needed a change of scenery. They wanted to do something else than just be in their pastures.

Even though they each have a pasture that is beautiful; two acres in each, lots of yummy grass, tall shade trees, and they are next to each other, so they have each other for company, I think they just needed a change of scenery.

And then I thought of my current situation…

I guess I have been yearning for a change of scenery too, just like Kit and Danny. I can understand why the stallions wanted a break and wanted to do something different. It felt good to get them out and to change up what we had been doing. I think it was good for the horses as well as myself.

It just reminded me that sometimes everyone, including our horses, needs a change in scenery and a shift in the daily routines. Just so things don’t get to be too boring, I guess.

Now that my world has become so much smaller, I can understand how the stallions may view being in their pastures all day, every day, for the past 2 months. Even though I love my home, the farm, and everything involved with it, being stuck at home for the past 2 months has been stressful for me too.

This will not only benefit your horse, but I think it will be beneficial to your own peace of mind as well. I know it helped me. 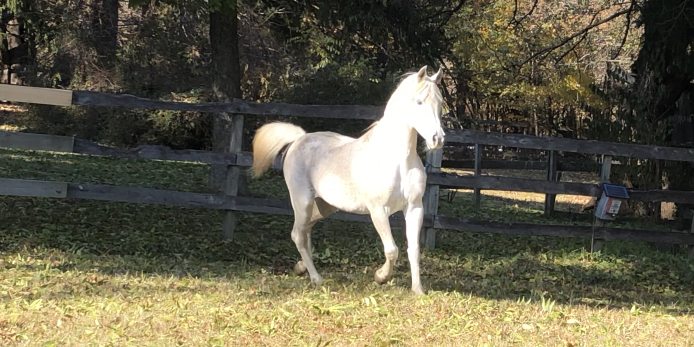 The first thing I learned was not to always expect a certain attitude or personality with my horses as they can change per situation. And to my surprise, they acted the exact opposite of what I expected.

The next thing this lesson reminded me, was to pay close attention to my horses, read their body language, and adjust quickly to whatever they were telling me. Just because I plan for something doesn’t mean it will turn out that way. Be flexible.

But the most important lesson this situation taught me, was that my horses need a change of scenery just like I do sometimes. I’m glad they showed me how happy they were to get out of the pasture, go walking around the farm and be in the cushy barn stall for a little while.

When they are happy, I’m happy.

I hope this helps you and your horses enjoy each other and have fun together.