I Can’t Control Them!

“Can you help me, I can’t control them!” 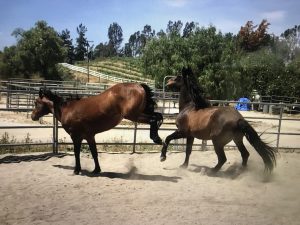 This was the urgent phone call I received from a friend the other day.But the problem wasn’t horses, it was humans…She went to on to tell me that about how much trouble she was having with the employees in her division at the prospering, small business where she works. My friend is the sweet, funny, happy-go-lucky type who is always trying to be the best friend and big sister to everyone. However, this doesn’t quite translate in the work environment and her modus operandi of never being harsh, never wanting to hurt anyone’s feelings and never pushing means she now has a crew of employees who totally take advantage of her kindness. It has gone on so long that even though she has tried to talk to them, tried to reason with them and tried to cajole them, no-one takes a blind bit of notice.In fact, it’s reached the point that, because her employees come and go as they please and take super long lunches, her job is now in jeopardy. She has no idea what to do and is distraught. She’s told them that if they don’t work their proper hours she may very well end up losing her job but it’s made absolutely no difference, they don’t seem to care.I told her that she needs to start getting tough with them and writing them up if they don’t come in at their scheduled time of 8:00am and leave before 5:00pm but guess what she replied.“Oh no, I couldn’t do that…”

And this despite the fact that she’s just about to lose her job! It won’t surprise you to hear that I’ve seen lots of people also have the same issue with their horses. They say the same think, “Oh no, I couldn’t do that…”.They want to be friends with them, they want to be nice to them but what ends up happening?Their horses walk all over them too, both metaphorically and sometimes literally.When you allow this to happen with either people or horses, you’re going to end up with the same result – lack of respect, lack of trust and a lack of confidence in your ability to lead.Horses will have a tendency to become more aggressive, pushier and generally much more trouble when you allow them to develop this type of attitude.I’ve asked people why they do it and they always reply that they don’t want to use whips or punish their horse so think they have to do the complete opposite.I then have to explain that there is a middle ground where you don’t have to punish your horse or teach him who’s boss and neither do you have to be a doormat. In the herd a mare will teach her foal manners such as when to eat, how to behave and then also reprimand him when he’s overstepped the mark.So if you’re not sure how to apply this with your own horse, think of it as being a parent.My Mom was a stickler for manners and we kids always had to say please and thank you, ask if we wanted to be excused from the table, and always politely greet visitors.And if we failed to do these things there were consequences!You must do the same with your horse.This doesn’t mean beating him of course but the old saying of ‘firm but fair’ certainly applies and so don’t be afraid to demonstrate to your horse if he has crossed a line. 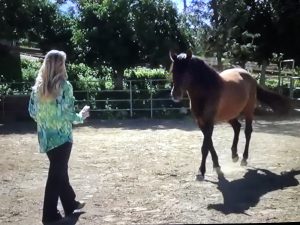 It’s all about establishing and holding boundaries.Having been with my horses for many, many years I trust them implicitly and rarely if ever have to tell them off or apply consequences anymore, but that doesn’t mean I won’t hesitate to do so when it’s called for.And given that they like to be near me whenever I’m around them, this can sometimes be as simple as just making them leave my space and not having them come back near me. They hate this.Put it like this, how would you feel if your Mom sent you upstairs ‘cause you misbehaved? You’d be sure not to misbehave like that again for sure!

In other words, the opposite of not beating your horse does not have to be do nothing at all.Do let me know what you think of today’s blog…Did it ring any bells for you?  Do you have a similar story?Otherwise I look forward to talking with you next week.Till then, happy horses!