Is the grass really greener on the other side?

Today I’d like to tell you a quick story of what happened this week with me and my horses.

I have been around horses all my life, literally, and it still amazes me that after 30 years with my boys, Jazz and Apollo, they can still surprise me… in a good way.

This week I wanted to move Jazz and Apollo into another pasture so they would be close to their buddies Maxie and Taz. They seem to really enjoy their company even though they share a double fence line now.

The new pasture I took them to shares a single fence line with Maxie and Taz and I wanted to see how it went where they could be closer and actually touch. Eventually, I would like to put them all in a pasture together as a herd.

Of course, that is where my head was. I had an agenda.

Well, I let Jazz and Apollo out in the pasture and they looked at me, looked at Maxie and Taz, and looked around the new pasture. They stood close to me for a few minutes while they checked out the new digs to make sure it was safe.

Then Apollo took off running across the field and Jazz followed suit after a few seconds as if saying, “Hey wait for me!”

Apollo didn’t slow down for a second and seemed to have a purpose in mind. I was standing there thinking, why did they not go say hello to their buddies who are standing at the fence waiting for them?

Then I thought, why is Apollo running all the way to the end of the field? (which was about a mile or so away). Then the thought and feeling of “Oh shoot!” came to mind. I just knew instantly that something wasn’t right.

A little background… Systematically I walk all the pastures on the farm once a month just to make sure that the fence line is sturdy as we have lots of deer that jump into the fields but don’t always clear the fences. So sometimes I will find a top fence knocked off and sometimes even a bottom fence and I just fix it. Well, I had checked this fence line just a week earlier and there were no issues. That’s why I felt safe letting my boys out in this field.

I guess I should have checked one more time as a family of deer had decided to come through the fence sometime that week and they knocked down a portion of the fence that was in the tree line. They actually knocked down about 100 feet of fence line, clear to the ground.

So as my horses were running as fast as they could to the far end of the field, making a beeline for the tree line, I realized that they’d seen something I hadn’t. 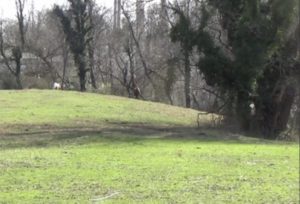 So I took off jogging as fast as I could to the far end of the pasture too just as I saw my horses disappear into the trees.

The fence was supposed to be right at the tree line so as soon as I saw my horses disappear I knew there was no fence and my horses were now out and had a big head start on me.

Once into the forest, I knew I could well be chasing them for a long time as there are 50 acres of trees on this side of the farm!

However, when I got to the edge of the pasture I saw my boys standing there as happy as could be eating the long grass that was in the forest.

The funny thing was that they were only maybe 100/150 yards on the other side of the broken fence. They had “escaped” and could have easily continued into the forest since it’s winter here and the trees have no foliage. But instead, they stopped at the first patch of green grass and were very content.

I took a deep breath and just watched them for a few minutes enjoying the grass.

I laughed at how cute it was that they had “escaped” but hadn’t really gone anywhere. So I said to them, “Ok boys, I guess you found a great little spot, do you mind if I join you?”

And I went over, put on their halters with leads and just stood there with them until they were ready to go back. It was all calm and peaceful.

I even rewarded them with a little adventure and we took a walk through the trees for a bit checking out the little patches of tall grass and exploring that side of the farm. None of us had been this far before and had never explored this patch of trees since in the spring, summer, and fall these trees are so thick and covered with vines you can barely even see through them.

We walked back across the field, said hello to Maxie and Taz in passing and then walked back into their normal pasture and all was good. 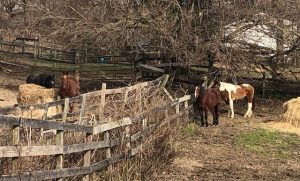 Of course, they had to go right over to Maxie and Taz on this side and tell them all about their little adventure. Even though they now had their double fence line again, you could still see all four of them huddled over the fence line talking about what had just happened.

While it was all going on you could hear all the other horses on the farm getting excited and yelling, “Go for it!”. Funny how they all know when one of them is going for an escape!

What did I learn?

One, that I should always check the fence lines right before I let horses out in another pasture.

Two, that my horses have better eyesight than I do.

And three, the grass really is greener on the other side of the fence.

But more importantly, I realized that having the trust and bond between me and my horses makes such a big difference. More of a difference than I even realized before because if I had freaked out and run over to my boys to “catch” them since they had “escaped” and were now running free, they would probably have gotten scared or spooked and run even farther into the woods and that would have been a real mess! Your emotions really do have a big impact on your horses.

Because of the trust and bond that they have with me, they didn’t mind me joining their little picnic in the trees and putting their halters back on them while we enjoyed their new spot together.

Plus, we got to have a little adventure together which probably bonded us even deeper. So, because of our connection, there was no drama or trauma and everything worked out smoothly and easily where it could have become a disaster. 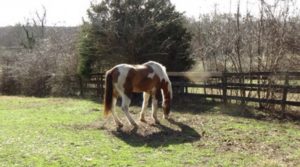 They are good teachers, kind, patient, and compassionate. They are even funny at times with what and how they teach me. I love them to death and would do anything in the world for them and any horse in need for that matter.

What has your horse taught you recently? I’d love to hear your story so please let me know in the comments below. Thanks!