One of Those Oops Moments

Well, everything has been going great with Merlin so far.

I’ve only had him for two months (he’s only 8 months old) but we have worked on a number of things. Besides working on getting to know each other better, trusting each other, our connection, how we communicate, and becoming a herd, we have also worked on the following:

We’ve spent lots of time doing something and doing nothing together. And that’s only being able to work with him 3 days a week. The whole time Merlin has been very well mannered, very courageous, very trusting and hasn’t spooked or even shown fear once. It has been a pleasure being around him.

His weaning process went very well and very easy. I wanted it to go slow so that he had as long as he could being around his mother. But 8 months was all the mother’s owner had until she moved her horse to another facility. Since I got him at 6 months I only had two months to wean him. The middle of December was my deadline.

Famous last words… “seemed to be no issues”.

As I mentioned in the bullet points, I had been preparing for Merlin’s first farrier visit. His feet were in good shape but I wanted the farrier to come out and start to work with his feet and just do little things to start out.

I was pretty confident that Merlin would do great because I could pick up his feet for at least a minute or two and fiddle with them without issue. Merlin would even pick his feet up for me as I got to each leg. We did it every time I was there, right after grooming. A nice little routine that he got used to. 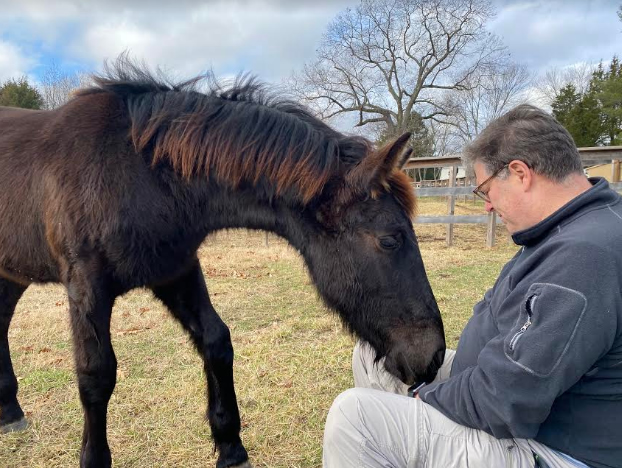 Merlin wasn’t afraid of people as he had been handled by me, my husband, and 2-4 other workers on the farm without issues. Well, there’s always a first.

The farrier came out and brought his equipment into the pasture as this is where Merlin was used to being groomed and having his feet done by me. After the farrier put his stuff down by the run-in shed he came over to say hello to Merlin. I had him haltered and on a lead.

And when the farrier came over, arm outstretched towards Merlin, Merlin spooked for the very first time. He backed up and wouldn’t let the farrier touch him. My husband, who was also in the pasture, looked at me as this was very strange for Merlin.

I asked the farrier to wait until Merlin calmed down a bit before he came in again to say hello. We walked away and he was starting to calm down. Once the farrier saw this, he tried again to come in to pet Merlin with his arm extended again. But he came in at a bad angle and was acting more like a predator than a friend, with his arm outstretched and too high.

Merlin reacted even stronger and more afraid. Merlin and I backed away from the farrier again and instead of giving us a moment, the farrier started to come in even harder and faster and this time he tried talking to Merlin to say it was OK. But It wasn’t OK. He was too fast, loud, and forceful for a colt that was already afraid.

I started to say, “no, no, no” to the farrier to back off but I think he thought I was talking to Merlin. He didn’t stop. I realized how scared Merlin was of the farrier and how he was ramping up his fear. This then made me nervous, naturally. I know Merlin could sense me getting upset.

Merlin started to rear as the farrier came barging towards him again and this time I also saw the fear in the farrier and it clicked. The farrier was trying to overcome his fear by “pushing through it” which was also pushing way too much pressure onto Merlin. Not a good mix.

The only thing I could do was to get Merlin out of that situation as fast as possible since the farrier wasn’t listening to me or Merlin. So I backed up very quickly and made room for Merlin to escape the farrier’s touch as I was telling the farrier to “back off”.

It all happened so quickly!

As I backed up, at a fast clip, I didn’t see where I was going. The only thought I had was to get Merlin away from the farrier and get him to safety so he could calm down. And then I felt the sharp, cold surface of the farrier’s toolbox against the back of my knee and it was over.

The toolbox handle hitting the back of my knee buckled my leg and all of a sudden I was in mid-air going backwards and I could see my own feet going over my head. I shut my eyes and tried to tuck forward as I let go of the lead rope. The next thing was me hitting the ground on my left side and I heard the sound of the tools jingling as my foot hit them.

I opened my eyes and saw poor Merlin’s hooves right next to my head and side stomping up and down in place at a frantic pace. I then tucked my head in my arms and thought, as hard as I could, “JUMP!” And darn if he didn’t do just that.

Merlin was trapped. He had my husband behind him to the left and the farrier behind him on the right, and in front of him was the run-in shed, and then me right at his hooves. He had no escape and no obvious way out. Except through me.

Luckily our connection was strong enough and our communication was good enough that he understood me and didn’t want to hurt me. He consciously thought about protecting me and didn’t trample me, didn’t kick me, and when he jumped over me, he flew way above my head. He never touched me.

My husband said it looked like a scene from The Matrix. I hit the ground, the dirt went flying upward, I rolled in a ball, Merlin jumped over me, and I popped back up on my feet, and went right over to Merlin (who had run to the other side of the pasture). All in a matter of 1-2 minutes.

That’s not the way I wanted to test our relationship, but I’m so glad we had bonded so closely.

And this was the first time that Merlin had ever jumped over anything, so that was brand new to him. I’m really glad he is good at it. After all was said and done, I told the farrier he was done.

I was not going to try that again when it was so obvious to me that he didn’t like the farrier. I trusted my horse and I needed to listen to him. He was afraid of the farrier and I wasn’t going to put him in that situation again.

So the farrier picked up his stuff and left and I stayed in the pasture hanging out with Merlin to make sure he was ok and that he calmed down before I left. All was well within minutes of the farrier leaving. Merlin was back to normal, calm and happy.

Then I had to really look at what had happened…

Yes it was my fault I didn’t remember where the farrier had put his stuff and I wasn’t aware of my surroundings as well as I should have. That was my obvious Oops moment. But why did Merlin spook so drastically with the farrier when he had never spooked at anything before? 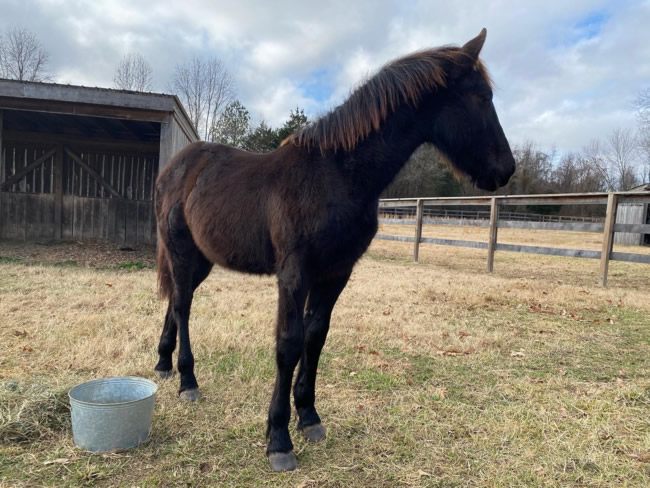 My next Oops moment. I forgot that this was the same farrier that had been terribly hurt by his own horse two years ago and was in traction with 50 broken bones. I saw the fear on the farrier’s face when Merlin spooked. But my suspicions are that the farrier was afraid of Merlin (he’s a big 8-month-old colt) from the get-go and that Merlin felt that fear. That’s what he was reacting to.

I don’t think Merlin has ever been around anyone with fear. This was totally new to him. So he reacted with his natural instincts which told him this man was not safe and he needed to get away from him. But at the same time he was trusting me and trying to listen to what I was saying as well. Such a good boy. But this was the first time he had to deal with this kind of situation.

Then it all fell into place when I realized that the reason he got so spooky was also because he didn’t have his mother around anymore and she was his go-to whenever he was scared. Another Oops moment for me – the fact that I didn’t realize that not having his mother on the farm would make a difference when he got afraid of something. His mother isn’t coming back, but I need to think about this when working with him.

So many little Oops moments that piled up quickly and culminated with me tumbling backwards with force and landing pretty hard in the dirt. Luckily I only ended up with one broken finger, a twisted ankle, a sprained wrist, and a bunch of bruises. It could have been so much worse! Typing with one hand is not fun though. But I’ll take it over what could have happened.

I am so proud of my little one with how well he tried to listen and how he protected me. Also, how he understood me and knew to jump over me without hurting me. Then when the farrier was gone he just cuddled into me to comfort me, he knew I was hurt. He was also enjoying getting comfort from me to reassure himself too. It really was sweet.

It shows me again how important it is to work on the relationship first and foremost with your horse, and how just having that solves so many other issues that could come up. Because no matter who you are or how experienced you are with horses, there will always be Oops moments.

All we can do is try to be as safe as possible and work with our horse to resolve any issues that come up in a positive way. How we handle our Oops moments is also important. Something to think about.