4 ways to reduce flies from biting your horse

Well, summer is here in Maryland and that means the flies are back.

Last summer I showed you a neat, little, cost-effective trick for reducing the number of flies in my barn …i.e. the ‘ol bag of water trick.

And other than that, I do three other things to help my horses with the flies.

However, I have a few students that have such serious problems with flies around their horses that they actually have to cover their horses’ bodies as much as possible. This usually means a fly blanket, a neck cover, and even sometimes some sort of cover on their legs just to keep their horse comfortable.

This can be a real problem especially as many horses are allergic to fly bites. 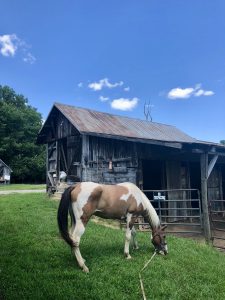 When I was younger I didn’t think too much about flies and just considered them a nuisance and not something that could hurt you.

But that all changed when I started working around horses. I became all too familiar with these HUGE flies everyone called “Horseflies” that would leave big, old welts on me and my horses.

I’m not sure if they called them horseflies because they were really big like horses or if they just were mainly seen around horses but they sure left their mark!

When I was growing up in Maryland, my family loved to swim in the pool during the summer. However, since we lived on a horse ranch, we’d see these darn horseflies flying right above us waiting for a chance to land and bite.

However, my Dad had the solution to this… or so he thought.

He got us kids to stand up in the shallow end of the pool and hold still until a horsefly landed on us at which point my Dad would leap into action with the fly swatter. Ouch!

I wasn’t sure which was worse, the bite or the swat. Sometimes the horsefly would bite us at the same time as we got swatted, so it was a double ouch!!

We soon realized we’d get it either way, so as soon as Dad said, “Don’t move”, that was our cue to duck under water as fast as we could because we knew he’d spotted a fly near us.

It then became a kind of game to see if we could stay underwater long enough for the fly to lose interest. Despite their reputed lack of attention span, the flies always seemed to outlast our ability to hold our breath underwater and so as soon as we came up for air they’d attack us.

They were vicious little things.

As I got older and traveled to different states as well as internationally to give clinics, I discovered that there regular sized flies can bite as well. So now it wasn’t only big black horseflies I had to worry about, but normal size flies as well.

In my research to find out how to keep flies from biting my horses, I found that the flies bite in order to draw blood, as a meal, so that they could produce eggs.

But this biting process also transmits diseases, not only to us but our horses as well and can spread diseases like equine influenza, trypanosomiasis, and equine infectious anaemia.

I also read that these fly bites on our horses are as invasive as a hypodermic syringe. Here I was running from the horseflies myself because their bite hurt. Then I found out that it hurts my horse even more than it hurts me, plus was a health risk for them.

At this point I knew I was really going to have to do whatever I could to reduce the flies biting my horses. I have tried all sorts of stuff over the years and the four things I mentioned above are what has helped my horses the best so far.

However, I am always open to new ideas and the other day I came across this article about Zebras, Horses and flies.

Boy, did this catch my eye.

The research team, in this study compared the behavior of horseflies (Haematopota pluvialis and Tabanus bromius) as they attempted to land on and bite three zebras and nine uniformly colored white, grey, brown and black horses living in similar enclosures at the Hill Livery in Bristol, UK.

The research team reported that the horseflies approached, circled and touched the horses and zebras equally, probably attracted to their scent.

However, the flies landed on the zebras less than one-quarter as often as on the horses. So, even though the horseflies pestered the zebras just as much as the horses, they landed far less often on the zebra’s striped coat.

They also found that the horseflies approached the zebras at a far faster rate of speed, failing to slow down as they closed the distance to the zebra, often crashing into the zebra before flying away, or flying right passed it as a near miss.

That probably was pretty funny to watch in slow motion as they did videotape all of their research LOL!

But, because this strange flying effect was only seen in the last moment of a horsefly’s approach, when they were within one to two meters of the zebras, the research team surmised that the zebra’s stripes bedazzled and confused the approaching horseflies.

They proposed that this confusion may result from the horseflies’ low-resolution vision, which relies on detecting motion. Such “motion dazzle”, as they called it, is created by high-contrast patterns that interfere with the fly’s perception of a striped object’s motion. Incidentally, this has been reported for other insects, too.

So, the lesson I got from this research study was that if you have major difficulty keeping the flies from your horse, try putting a fly blanket on that has zebra stripes, or even a fly mask that has black and white stripes on it.

The research also showed that zebra stripes would work on humans as well if you were trying to repel flies. Actually, any high contrast colors that act like zebra stripes should work.

I haven’t tried this yet but if you try it, or if you know of any great solutions to stopping flies biting, please let me know in the comments below.