When I was a child competing in jumping, my trainer would always put me on a horse that I had never ridden before. It was always a different horse and he would tell me that I couldn’t bring my horse because this horse was a better jumper. He was trying to stack the odds in my favor.

This is probably when I realized how important bonding was. When I had some time to hold that horse, the two of us watching the jumpers before us, and I had time to scratch him and talk to him, bonding, then I always did better. The one time I went out in the ring with no time, they just threw me on and said go, the horse stopped at a jump and I went flying in the air over the jump. Lesson learned!

Anyway, I got a call from a horse friend who went off about what she had just seen during the Olympic Equestrian jumping competition. This is the video she pointed me to…

Just that one instant decision took her from hero to zero. If she had in that moment, looked at her coach and said NO and then had released the tight hold she had on the reins and petted her horse to calm him down, she would have been a hero. But instead she pulled the reins tighter causing the horse pain and hit him over and over again in anger with her crop. That one decision took her to a zero.

I don’t care how good a rider you are if you mistreat a horse. It is a living, breathing creature that deserves our protection and care. I understand frustration with people and animals. But you don’t beat up your spouse when you get upset, so why beat up your horse?

Walk away if you get that upset, don’t take it out on the animal. This is a very sensitive subject for me as I’ve seen so many students and trainers in my lifetime say they are gentle and love their horses, but then when they get upset they beat the *$@! out of their horse. There is no excuse for this. It is absolutely wrong! That’s my opinion and I’m sticking with it.

When I saw the video, I was actually more upset about how the rider had treated the horse than the coach. Yes, I was still upset at the coach for not only hitting the horse’s hindquarters out of anger, but more that she had told the rider to hit the horse hard. The whole thing was out of frustration and anger. And that made the situation even worse.

I watched the extended version of the video and this is what I saw:

On the video I saw there were lots of comments. Here are a few comments that I totally agreed with:

This was not the horse’s fault. If you’ve been reading my latest 3-part blog, you will know exactly why I say that. The situation happened and escalated due to the rider’s actions.

There were quite a few things wrong with this whole situation, but for this blog I just want to discuss the bonding part.

There were a lot of comments on this video about having only 20 minutes to bond with the horses and how the riders should be able to use their own horses who they’ve trained with.

Looking at this as an Olympic competition that is judging the rider and not the horse, I understand why the competition has asked the riders to pick from a selection of top qualified and trained horses.

In order to even the playing field so that it really is the rider being judged and not the horse, I understand why they aren’t able to ride their own horse in the competition.

On the other side of that coin, the relationship and bonding that happens between rider and horse makes a big difference! So, someone with a $20,000 horse could have a better bond and a better performance than the person who owns the $100,000 horse. But again, then the rider alone is not being judged. 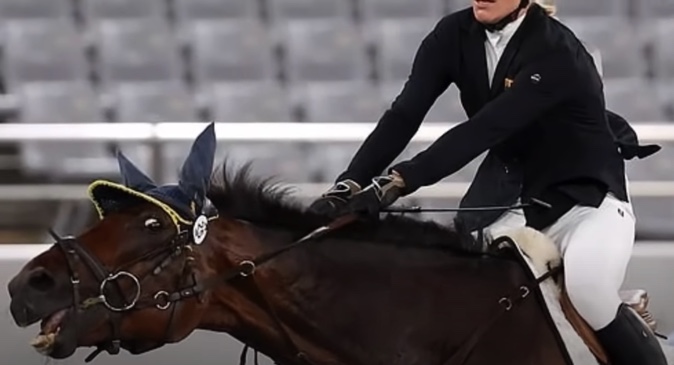 I understand the non-emotional reason behind the decision not to allow riders to use their own horses. And I agree with that rule for the reasons I mentioned above.

However, the rule of allowing the rider only 20 minutes to bond with the horse before going on I think should be changed.

Again, from a non-emotional viewpoint I can see that by giving the rider only 20 minutes with their chosen horse, they are judging the rider on how well they connect and bond with their horse. But it doesn’t allow them the chance to communicate with each other about how they like to ride.

I like the idea that they are judging the rider on their ability to connect with a strange horse. That is very important and I’m glad it is finally being recognized at the Olympic level. But they aren’t taking into account the communication needed between rider and horse. Everyone rides a little different, human and horse.

During this time the rider would be able to find out:

Plus, it would allow them time to be able to do a bit of research about this horse from his past performances. The rider would be able to see what the horse responded to or dis-liked. That’s a part of the bonding process, getting to know your horse.

20 minutes before they go out in the ring together in a loud, energy filled, competition that naturally brings stress and fear is just not enough time. I don’t feel it does either of them justice. They deserve more than that. Even an hour would be better. 20 minutes would be enough time to calm each other down and just start to connect. But it leaves the rest of the equation out.

You hear me say this over and over in my blogs and to my students all the time. But it is so true!

I can do these very quickly and I can teach you how to do this very quickly as well with any horse. However, when you put all that with the atmosphere of an Olympic competition with high emotions… you need more than 20 minutes in my opinion to get the perfect cooperation between horse and rider.

20 minutes might be enough time in a normal, everyday situation but 20 minutes in that Olympic situation with high emotions, high stress, and then add someone that doesn’t know what to look for or how to listen to their horse… it’s a disaster waiting to happen – which it did.

It’s like speed dating where you have 10 minutes to talk to some stranger at a table to see if you click. Then allowing another 10 minutes alone to complete the date.

The woman is thinking; “He seems nice, maybe, I don’t know, let’s take it slow”.

And the man is thinking “Hey, we really click and I think she digs me”.

Then he starts manhandling the woman thinking her eyes are saying yes when in reality she is saying whoa. Disaster!

That’s what I felt like while watching the video of Annika Schleu riding Saint Boy. You could just see it coming and getting worse quickly. What she did escalated the problem instead of resolving it.

I don’t think it would have gotten out of hand if she had realized that the horse was scared and if she took a second or two to immediately calm him and herself down, figure out what was going on with him and then proceed. If she resolved the horse’s issue and reassured him that she was listening and she understood him, she would have had an incredible ride instead of a traumatic one. 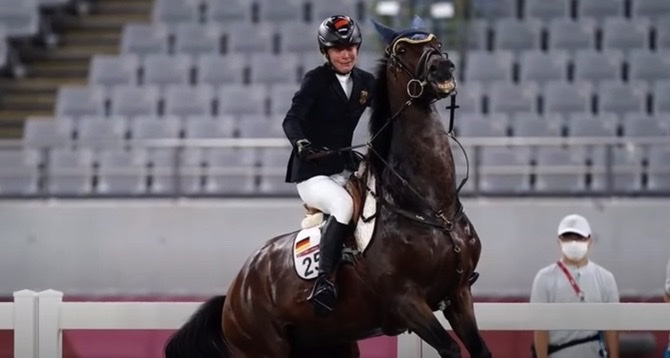 These are all very important in handling horses, whether in competition or not. It definitely separates the true horse lover from the person that feels a horse is just a possession. And the people with a true heart-to-heart connection as opposed to the push button horses you just ride and get off with no concern for the horse or the horse for the rider.

This just showed me that this rider didn’t bond with her horse in the 20 minutes. Which was part of the process being judged. And yes, I feel it is possible to bond with a strange horse in 20 minutes and be able to start communicating with each other in this time.

That is a unique skill and a very important skill in my book. It is also a skill I teach in my personal coaching program. A life-long amazing connection and a true heart-to-heart relationship is a dream come true for many. It is also a beautiful transformation that I have seen in all of my Coaching students.

I hope you are able to have this with your horse as well. And if you do, enjoy every second, it is a precious gift for both you and your horse.

If not, let’s talk about how you can go about achieving it: https://teddiezieglerhorsemanship.com/book-call-int/