They are Still Out There! (Part III)

On my second day at this facility, I washed Kit and realized that he had whip marks and scars. I couldn’t believe it.  About 20 of them. He never had any of these before he was moved. I’m not sure when they happened or why.

Kit is the most loving and gentle stallion I’ve ever handled. His problem was that he didn’t like humans much and was a loner. He didn’t trust humans and instead of fighting them, he just ignored them. Now he has new reasons not to like or trust humans. He was learning, or being taught, not to trust.

But the good news is that last week Kit was seen by my vet. He is one of the top rated vets in the state.  He’s been my vet for the last 5 years and is incredible.  When he saw Kit, he was shocked at his extreme loss of weight. I showed him a picture of Kit before he arrived at the boarding facility. The vet weighed him.  Two weeks after I had started working to help Kit, he was now up to 676 lbs. His normal weight should be about 900+ lbs.

The vet checked Kit out and also did bloodwork. Luckily, his heart, gums, liver, kidney, and other major organs are all good. He was just terribly underweight. The vet felt that Kit was upset about being moved, losing his buddy, his herd, and until now me.

Plus the fact that the facility owner changed his feed cold turkey and had him stuck in a barn stall with mares in the nearby stalls, a stallion right next to him and lots and lots of activity that he wasn’t used to. Then when they let Kit out into a pasture, they just left him there next to the mares and he would run the fence line constantly and run off even more weight.

Then with the inconsistent watering, and the facility owner breeding him to her mare without the permission of the owner, and ther whip marks on him, it’s no wonder why he’s stressed. All of which, of course, made him more anxious and more high-strung.  He would just pace in his stall trying to get out to the mare next door that he had already been bred to.

There was just too much activity going on for Kit.  The other horses were used to it, but not Kit. 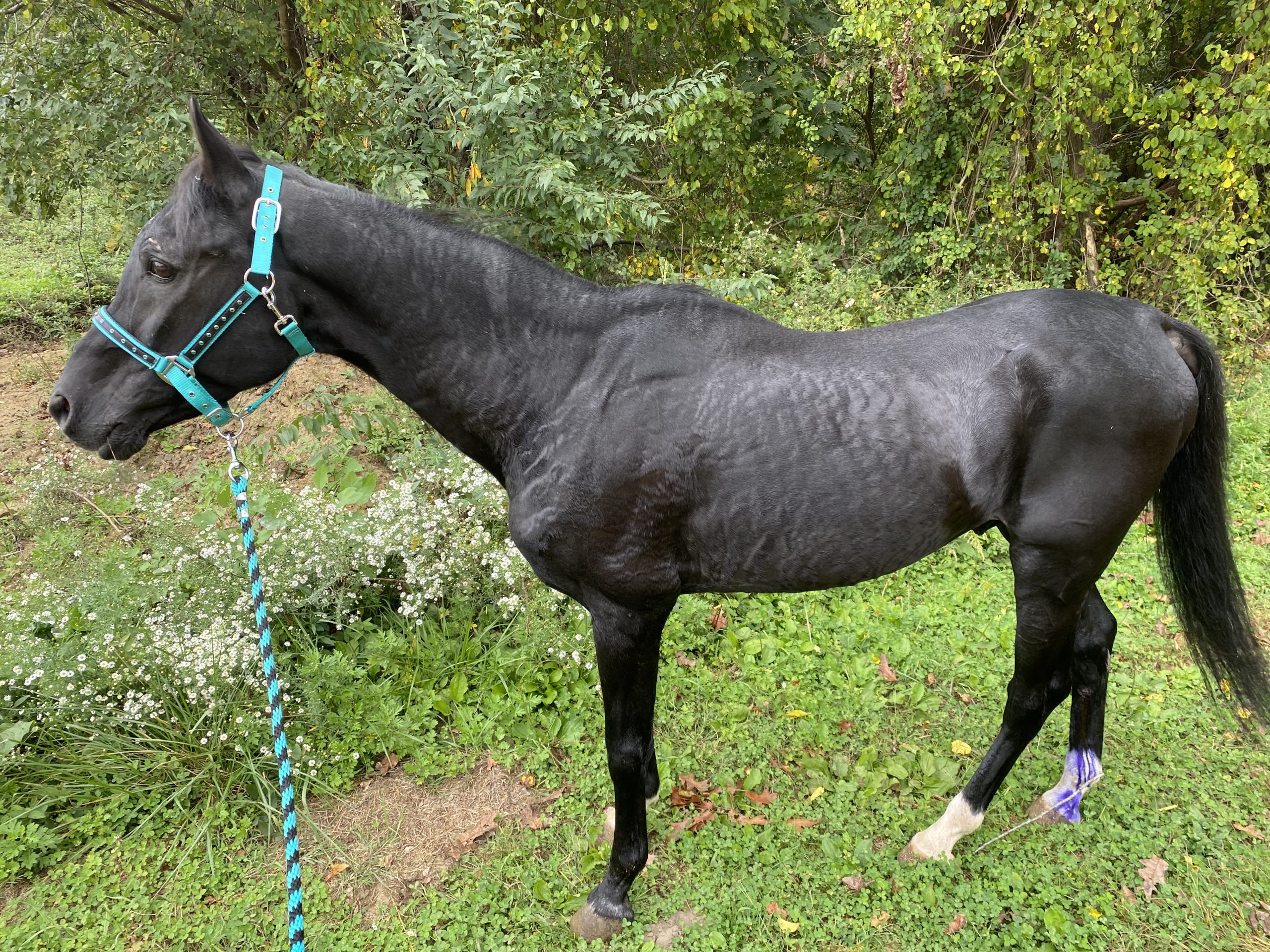 Every time there was a lesson given at the facility, there were children running in and out of the barn with their horses. And the wash rack was right next to Kit’s stall. So all the kids would bring their horses over to the wash rack and even line up right in front of Kit’s stall. They just stood there in front of Kit’s stall with their horse and Kit would go nuts. The kids had no idea that anything was wrong. It wasn’t their fault. But again, there was no adult supervision with the horses in the barn after their lesson.

I saw this a few times in the last week and had to take active measures to calm Kit down. As you saw in the Stallion Series Program, if you watched it, I socialized Kit to the mares on the farm. We could walk around the farm, say hello to the mares, even the ones in heat, and he was a perfect angel. No issues. But now that he was obviously being bred to at least one of those mares in his barn, he was a different horse when they came around.

I did get the mare away from the front of Kit’s stall, but she had already done the damage of flirting with him. This time I saw Kit rear up in his stall, stand 100% upright on his back legs, stretch his front legs all the way up to the top of the stall wall (8 ft high) and try to peek his nose over the top. So dangerous!  If he had slipped or fallen sideways or backwards he could have killed himself.

One of the kids told me, “He does that whenever I’m here. He really likes my horse”. Wow. The facility owner must have seen this in the last 12 weeks and she had to know why, and it’s not because he likes the other horse. But she didn’t do anything about it or tell the kids to go to the other barn entrance and stay away from this stall with their horse. This lack of concern endangers the children she is giving lessons to.

The more I’m there, the more I see, and the more I can’t believe how bad this place is for the horses and the children that come there. They even keep halters on all the horses 24/7 in the stalls and in the pastures (not break-away halters).

This is now the third week I’ve been here helping Kit. The good part is that Kit is now at 713 lbs. He has gained about 75 pounds in the last three weeks. But he still has about 200+ pounds to gain. However, the gaps and the hard edges are filling in nicely and slowly as they should. Kit is much happier and much calmer with me around. Kit walks quietly now around the farm with me and we get a chance to eat grass and enjoy the fall days.

I can see the “old Kit” coming back emotionally and mentally. Here is a picture from today. 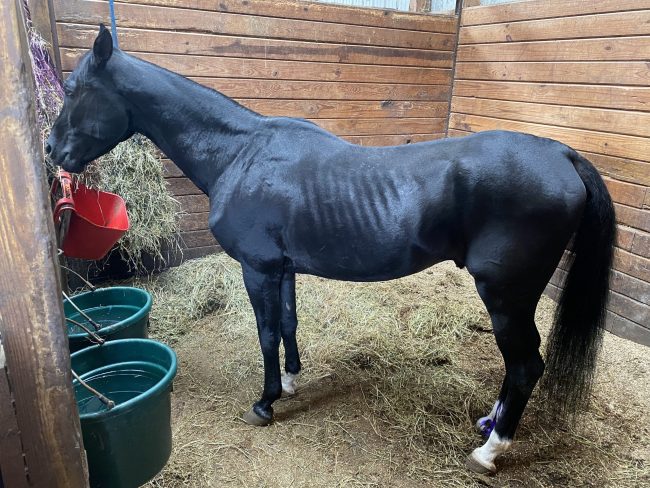 When I first got there Kit was so anxious he wouldn’t stop moving when I took him out and he didn’t want to eat a blade of grass for the entire first week I was there. Poor guy. He was so upset. Kit has really changed in the last three weeks and is coming around nicely.

I have been working with Kit’s owner to get him moved and to a safe place. As of right now, we have found a new place to move Kit where he not only will have a 2-acre grass pasture with a big run-in shed, but he will also be with his old herd again. Six of his old herd from my farm are at another private home about an hour and a half away from me and the owner of that farm has agreed to take Kit in.

They are currently building a new fence line so that Kit will be near the other six horses, but not be able to touch them (5 mares and 1 gelding). He will be just as close there as he was at my farm. I’m sure he will be so happy to see and smell his herd again, especially in his own grass pasture.

Plus an added bonus is that Kit’s owner and her brother are moving onto the property as well and she will be able to see the entire herd from her front porch. She has promised to get herself out to the fences and be with Kit, just hanging out, every day she can. Plus I will still visit Kit and be there with him 2-3 times a week for the rest of his life.

Unfortunately, I was not able to purchase Kit because the owner just can’t give him up. She owned Kit’s parents and foaled Kit herself. He is the last of her stallions and she dearly loves him and just can’t sell him.

It has been very difficult for her because of her disability, but she says she is determined to do what she needs to for Kit. She feels terrible that she trusted this facility owner and believed her lies without checking in on Kit. But she has said that I can be a part of his life forever and that she is very grateful for all the love and effort I have put into Kit to keep him alive, healthy, and happy.

Even though Kit will have to remain where he is for another week, I am now hopeful that he is on the right path and is getting better mentally, emotionally, and physically. Plus I’m sure Kit will be so happy to be with his old herd again. I will let you know how it goes. 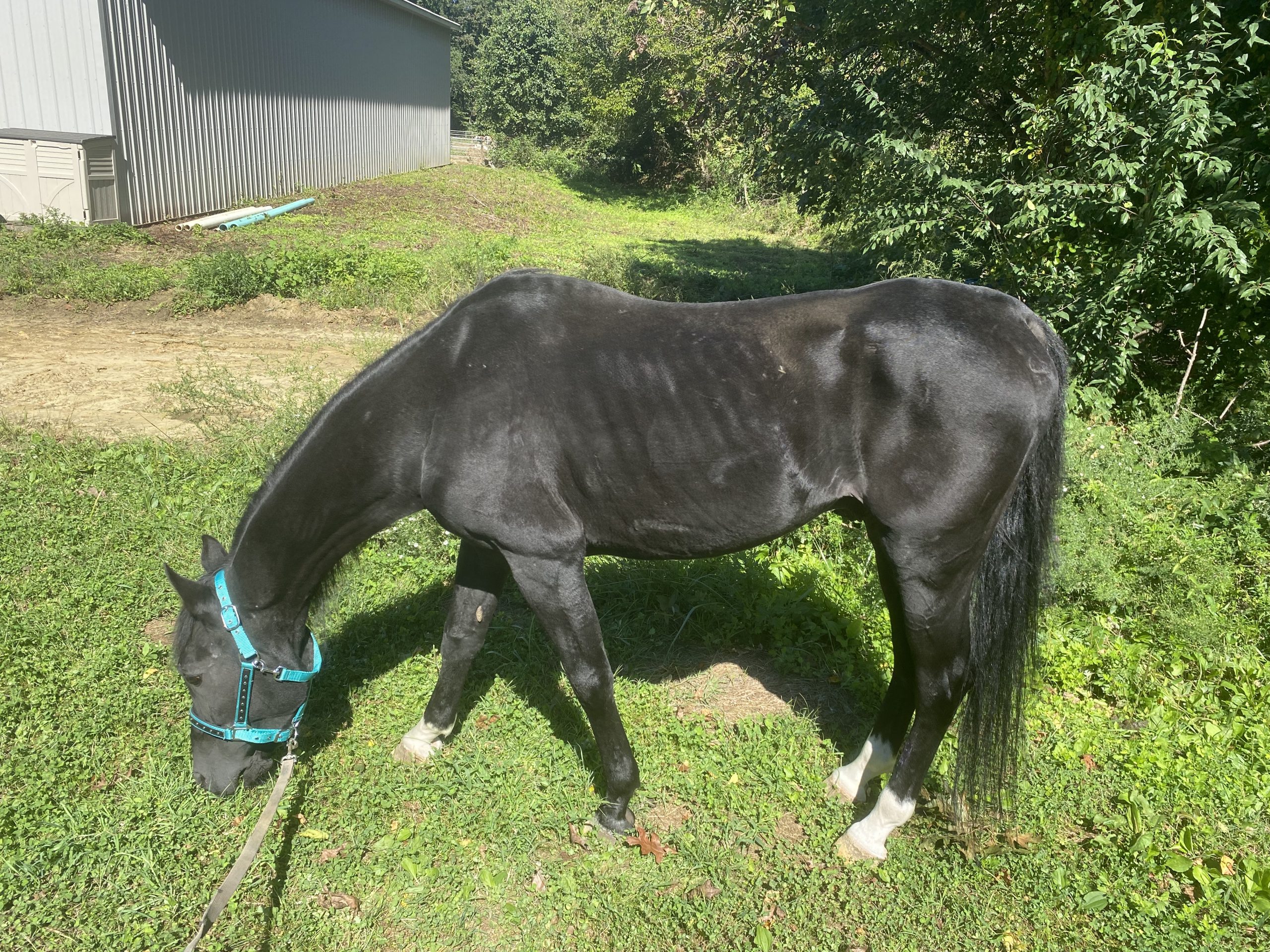 If this story shows anything, it shows that some horse people still have a long way to go until horses fully get the respect, love, and care that they deserve. But with the right supervision and the right people advocating for each horse, great things can be accomplished.

There was a lot wrong with this facility and the people running it, but with a strong, passionate vet advocating for Kit, animal control on top of the situation, and my supervision and care, Kit is in good hands now and will be in a great place soon.  He is doing much better.

Plus animal control feels that he is safer being here for one more week under their supervision, gaining more weight, instead of being pulled out and put in a quarantine/rescue facility that will freak him out more and where I won’t be able to go help.  That would make him much worse.

Push the Easy Button with your Horse.

Even though the facility owner probably wouldn’t listen to new ideas, I think her staff would.  It would be good for them to know that you can get great results and have an incredible relationship with your horse by just pushing the easy button. There is never any reason to use force or severe punishment in any situation.

There is always a better solution. And that’s what I want to get across and teach anyone interested in a softer, more gentle way with horses. You can have it all and be nice along the way. It is possible! None of what has happened to Kit was ever necessary and all of it could have been avoided.