What’s the difference between a Heart Horse and a Soul Horse?

My husband and I went out to see Merlin, on one of his weekly visits, and while we were walking up to the gate, Merlin whinnied for us as he ran to the gate to greet us. That made us both smile as this was the first time Merlin had greeted us like this.

My husband had seen Jazz, Apollo, and D’Artagnan do this for me a million times, so he didn’t really see anything out of the ordinary here. But it was different. Merlin had not done this before.

At first I thought it was because Merlin wanted to get away from the horse he was pastured with and he was excited to go out and play. But I quickly realized that wasn’t it.

We both went into the pasture and set up our chairs so we could just hang out with the horses for a bit before starting our training. Then my husband realized that he had left his book in the car. So he left the pasture and started down the path towards the car.

Merlin then ran to the gate, bypassing me, stuck his head all the way over the fence as far as he could and started to whinny. He whinnied a few times. He was trying to call him back. 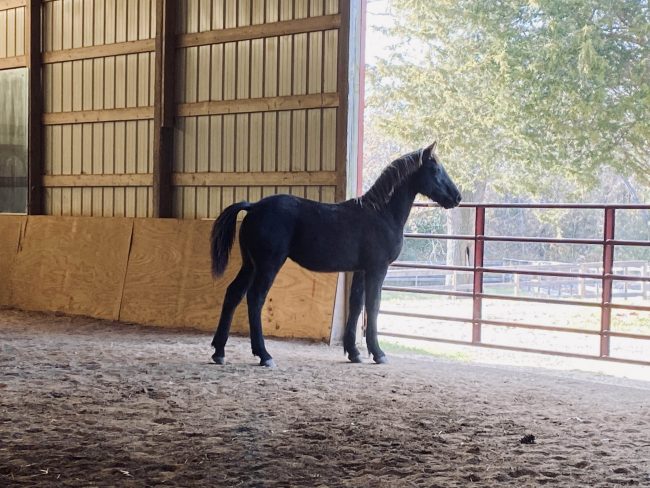 He was whinnying to my husband. Merlin just stood there at the fence and waited patiently until my husband came back. Then as he walked toward the pasture and got closer, Merlin started to whinny again.

I just laughed and jokingly said, “traitor”. Here I thought Merlin had whinnied for me since I’m out there a lot more than my husband, but nope. He had decided he liked my husband better.

I thought, well, it must be because he is attracted to the strong male image and feeling he gets when my husband is around since Merlin is usually with mares. Nope, again.

When my husband came through the gate, Merlin ran up to him and just snuggled in and followed him right to his chair. He then stood there right next to him, happy as could be. My husband just calmly scratched Merlin’s neck and relaxed into reading his book.

He had no idea how special this interaction was. But I recognized it.

I then told him that Merlin had whinnied for him when he left and what Merlin had done while he was gone. He was surprised because he is not a “horse person” and knows very little about horses. Except that he really loves this little guy.

He keeps telling me how deeply he cares about Merlin and how much he wants and needs to be around him. He tells me how strange this feeling is for him, but also how deep and innate this feeling is. He can’t explain his feelings, but he can’t deny them either. They are too strong.

He can’t stop thinking about Merlin. You can see the love and the connection between them so clearly. I was a bit jealous when I saw this, but I realized I had this with my D’Artagnan. So I’m happy my husband has this amazing connection with Merlin. Merlin is my husband’s soul horse.

I knew something was different between them from the very beginning. If you remember the blog about how they met, Merlin had left his mother and his herd and walked over to the fence line to be next to my husband. And then he stood there with him until we left. This was when Merlin had just turned 6 months old.

Merlin chose my husband to be his owner. Merlin had seen my husband at the fence paying no attention to the horses in the field and he chose to go over to him and be with him. He instantly connected to my husband and the lifetime bond was formed. 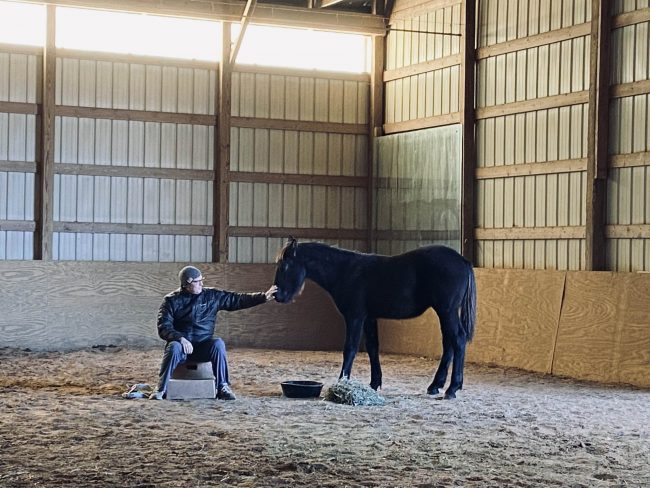 And not only for Merlin. My husband said the next day that he couldn’t get Merlin out of his head and he really, really wanted to get him. That had not even been an option on the table as I was still trying to get Kit.

We went to this farm to find a place to relocate Kit for his current owner, not to buy another horse. But the connection was so strong and so deep that my husband had to get him. He said there was no other choice or option, he was going to do whatever he needed to get Merlin. So, we did.

I told my husband that Merlin is his soul horse.

He said, “Like Jazz was for you?” I said no. Jazz had been my heart horse and D’Artagnan was my soul horse. I’ve only had one of each my entire life and I am blessed to have had both of them.

Here is how I explained each and the difference:

A soul horse is one that instantly connects to you and vice versa. No explanation, no training, no work, nothing… just pure connection. It’s love at first sight. My husband and I had this when we met and it was easy to explain the feeling this way to him.

He says that he has always liked horses, but never being a horse person per se, he really couldn’t care one way or the other. But he never wanted to own a horse or felt the need to ride a horse. Indifferent is a good word to describe him with horses.

However, he enjoyed going out every once in a while and being with and grooming Jazz, Apollo, and D’Artagnan. But he never really connected with them. He loved them, but it was like being around a friend he had known for a few years. Nothing more. He cared, but…

This was the first time in his life that he has felt this way about a horse, or any animal for that matter.

For Example: I was picking up Merlin’s hooves and he kept picking them up too high and losing his balance. Before I could think of how to fix the issue, my husband whispers to Merlin and asks him to just pick his feet up slightly. Then he said, “I know you can do this”. And darn if he didn’t do it exactly as my husband had asked him to.

This little 7-month-old colt was not only listening to my husband, but he understood him explicitly.

It’s beautiful to see and even more special since my husband doesn’t know much about horses. I enjoy it though because it used to be a chore to get him out with my other horses, but not with Merlin. He actually makes time and says, “Are we going out to see Merlin today?”

Whenever he wants, I make sure we go. They both are amazing together and it’s great to watch. I can’t wait to teach my husband how to ride Merlin. They will both be learning for the first time together.

That is a soul horse.

Now what is a heart horse and how is that different?

Well, Jazz was my heart horse. We met and with time, we fell in love. We learned about each other, we worked on our relationship, we had our ups and downs, but we worked it out and became best friends.

But it was something that formed over time and with effort. He was my heart horse because we had become so, so, close over time. I trusted him with my life and I know he trusted me with his. There were many occasions that we proved this to each other. Those experiences also brought us even closer together.

The relationship was so close that we did know what the other was thinking and feeling. We took care of each other and protected each other. We were so in sync that we could read each other’s thoughts, body language, and emotions instantly.

We would have done anything for each other. All I or he had to do was ask and the answer was always, “Yes, of course. Anything for you”. I could feel him deep down in my heart. When something was wrong I could tell even if I wasn’t there. We had such a deep connection that I always knew if he needed me and I would always go to him, even if it was in the middle of the night.

And as close and loving as that relationship was, it was still not as close as a soul horse. A soul horse speaks to your soul and your spirit. I would say that when people talk about a spirit horse, it’s the same thing as I call a soul horse. It is magical. It can’t be trained, earned, made, or really explained. It just is.

D’Artagnan and I met and that’s exactly what happened. It was fireworks going off and my heart and soul were his. It was unbelievable and instant. It was instinctual.

And you know it! You don’t have to think about it, you just know it. Unquestionable. And I knew he felt the same way with me. If you look at the video below of the two of us dancing together for the first time, you’ll see it.

This was the first time he and I had been in the arena together and we had never done anything together before this. No training at all. I had only known him a few weeks and had just sat outside his pasture before taking him in the arena.

D’Artagnan was a wild stallion that was going to be put down because he didn’t like people and was very aggressive. But in this video you can see that he is responding to me instinctually and following everything I did. He is reading my body language and tapping into my emotions.

He was a different horse with me. Because we were connected at the soul level. We had so much fun doing this. It was completely unexpected, but very much appreciated.

I love the little guy with all my heart, and over time I’m sure we will be best friends. But I know his spirit belongs to my husband. It’s the two of them for life. I’m just along for the ride. And I’m happy to be a part of both of their lives.

If you’ve had a soul horse or a heart horse, please tell us about him or her in the Comments sections over below, we’d love to hear your story.

Are you Moving Forward or Standing Still?

Do You Have a PMA?

Are you Looking for a New Horse?

A Gift from Jazz

This was a tough one to write…

Is it you or your horse? (Part III)