Why Did The Turtle Cross The Road?

Yep, that was the thought front and center of my consciousness as I slammed on the brakes of my truck.

I saw him just in time and the brakes did their job. Phew.

So, I opened my door and got out to ‘save’ this little turtle as I didn’t want anybody else coming along and accidentally running over the little fellow.

I picked him up and put him in the yard of a nearby house under a tree among some flowers.

I got back in my car and patted myself on the back thinking what a good deed I had done coming to the rescue of this ‘helpless’ animal.

What direction had he been going?

I’d picked the little guy up and put him on the right side of the road because there was lush vegetation and it was closer to the woods.

But hadn’t he been actually facing in the other direction?

I replayed the “TURTLE!!!!” incident again in my mind and to my horror realized that he’d been facing in the other direction going from the right side of the road to the left.

What had I done??

I could imagine the poor turtle saying to himself, “Geez, I had just gotten halfway across the road and now I have to turn around, cross this lawn, get back to the road and did it all again!”

Eeek, the guilt of it all!

So, I got out of my truck again, picked up Mr. Turtle from the flowerbed, walked him across the road and set him down somewhere safe on the other side.

So what’s the lesson here?

The truth is I had imposed my human thoughts and rationalization on him without looking at things from his perspective. I’d forgotten to slow down and look at everything going on in the situation and ‘feel’ what the turtle needed.

He just wanted to get across the street without getting run over or hurt. It wasn’t my place to put him in a place I thought was good for him and just ignore his wants and needs.

Isn’t it a reflection of the arrogance we humans often have due to thinking that we know better?

Assuming it’s safe to do so, how often do we really look at things from our animal’s point of view?

And that was my lesson too.  Because as I was driving along, before I met Mr Turtle, I’d been thinking about what I wanted to do with my horses that day and hadn’t for a second stopped to think about what they might be thinking or feeling.

I hadn’t even arrived at the stable yet and I’d already gotten my horse’s afternoon fully booked. 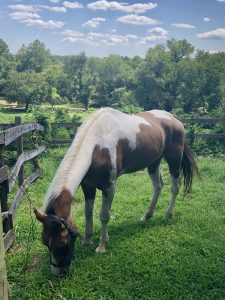 So, I had to stop and say to myself, “Let’s see what the situation is today first and then decide as a herd what we will do together. If we get to make the video I want to shoot, then great. But if not, that’s ok too”.

Take a deep breath and ask yourself…

How is my horse feeling today? What does he seem to want to do today?

And see if this helps bring the two of you closer as a herd, strengthens the bond and lightens the mood for both you and your horse.

As always, please let me know if you’ve tried it out and what happened.