A Herd of Two

Like many of you I have always owned more than one horse. I guess you could say it’s like eating only one potato chip – it’s hard to stop at one.

The good thing about that is you always have something to do, someone to love on you, and playmates to have fun with.

But one downside is that you can’t ride ALL of them each time you go out. Or at least I didn’t. I enjoyed going out on a leisurely ride for a few hours on one horse and then coming home and grooming all of the horses.

Even though I only had 3 horses, they each had their own strengths.

It has really changed the dynamics and our relationship.

Just as gaining or losing a horse in the herd changes the hierarchy, having only the two of us in the herd has changed how we do things too.

Even though I’ve had Apollo since he was born, minus a short stint when he was stolen from me, it has never been just the two of us. But now that we’ve been together for a bit and we’ve been helping each other heal, we have become even closer.

But sometimes my own fear memories come into play.

I mentioned above that Jazz was always my “riding” horse. Even though I taught Apollo how to be ridden and would ride him on trails, over jumps, and took him on group horse outings, Jazz was still always there.

When I went riding by myself, most of the time I would ride Jazz and pony Apollo. Then when I rode Apollo, I usually had a friend who would ride out with me on Jazz. Sometimes I would ride out alone on Apollo and pony Jazz, but that was rare.

Since Apollo was my “rodeo” horse and has always been high strung and quick, which I loved, the thought of now taking him out on brand new trails, in a completely new location, without Jazz or any other horses was a little overwhelming for me.

I don’t know if this has ever happened to you, but this was a new situation for me. How do I handle getting on Apollo, who I hadn’t ridden out alone on in about 10 years? What happens if I get into a bind?

I have to tell you it was a bit scary for me. My confidence in me and my horse faltered a bit.

When I say Apollo was my “rodeo” horse, I mean that he can go from soft and quiet to a bucking bronco in a heartbeat. Just like in the rodeos of old. 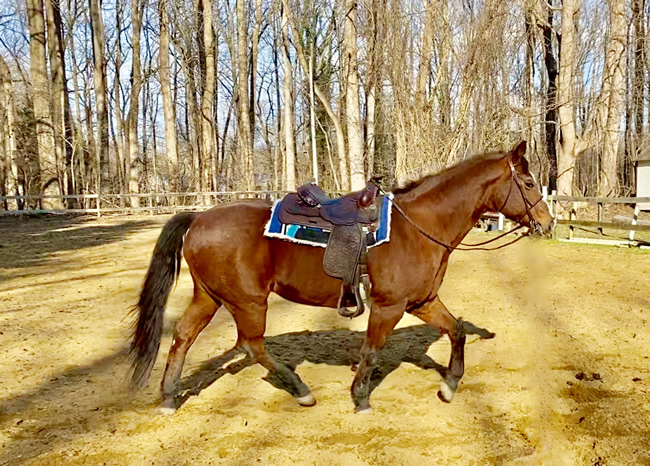 He once got spooked and jumped in the air, started bucking, shaking side to side, and spinning around all at the same time while hit the ground and bounced back up in the air doing it all over again.

He could move on all axles. When this happened, I did an “emergency dismount”, as they called it in riding school, as I was barely able to stay on. I would rather jump off safely than be unsafely thrown off.

Granted, this incident happened about 20 years ago, but it was still ingrained in my memories.

This was my own fear memory. It still had a grip on me after 20 years. And I still knew deep down inside that at any moment it could happen again.

Every time I get on Apollo, I am cautious. But thinking about getting on after 10 years of not riding him, was triggering my own fear memory.

I kept telling myself, “he hasn’t ever done anything like this since that incident, but…” I was trying to reassure myself with positive thinking.

Well, you guessed it – I finally told myself that I just had to test it out. And that’s what I did last week.

I thought that since we have become much closer in the past two months at this new facility, and that we have bonded tighter than before, that I would give it a shot.

So, on one of our warmer days last week, 45 degrees, I brushed Apollo down, put the saddle on and the bitless bridle and walked him to the arena. He seemed very calm and easy going as we walked together to the arena (me walking beside him). And he had no issues when I tacked him up.

I kept telling myself, “You got this. He’ll be fine.” I wasn’t sure I believed it though as that fear memory kept reminding me of the possible pain if I got thrown.

Well, we got in the arena and I lunged him first to see if he had any objections to the tack and to see if he would be too high strung to mount. But he seemed good. Ok, move forward I thought.

So, I jumped in the saddle and we took a little stroll around the arena at a walk.

Everything was going well, and he was listening to my requests but…

I’m not sure if it was me, or Apollo, or both of us feeding off of each other, but there was still some tension. We were only doing things at a walk as I wasn’t quite comfortable going into a trot or canter since I know how much he LOVES to run really, really fast.

Now Apollo was still doing well, but he started going over to the gate to say he wanted out. And I decided, “OK let’s try going out on trail”. Fingers crossed.

Of course, I had to keep breathing and relaxing so that I didn’t spook Apollo with my own nerves.

I opened the gate; we went out and we walked down one trail back towards his pasture and he acted like a pro. “Wow”, I thought. “Why was I so worried?” I was now more relaxed and we both were pretty happy and calm walking on this new trail.

Granted, I did cheat because I was headed back towards his pasture and he was happy to go in this direction.

“Push the Easy Button when possible”, I always say.

Then we get to his pasture gate and he stopped. I asked him gently to keep going as the trail went down past his gate, alongside his pasture and then back around by a stream and out to the other side of his pasture.

He’s never been out on this trail, but he has seen a few other horses go out on it and he’s followed them along on his side of the fence. So, he’s familiar with this trail. 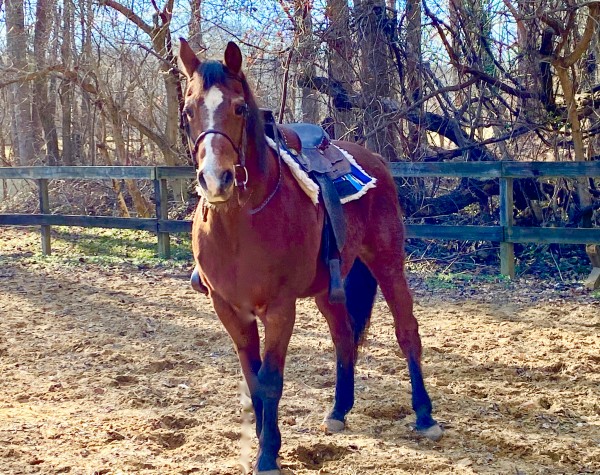 I asked again nicely, and he moved about two steps, tightened up, hunched his back, and turned his head and looked back at me. Oh boy!

He was obviously telling me that I had one chance to listen and after that he was going to react. This was his warning shot. And I knew that I probably wasn’t going to like his reaction if I wanted to push my request.

Have you ever been in a situation where you knew if you pushed it that there’d be a fight and you had to weigh that decision? Do I push it? or do I let this one go? What are the benefits or losses for each decision? Hmmmmm?

Of course, all of that goes through your head in about one-second flat and you have to decide right then and there.

I decided not to push it, and to listen to Apollo’s request.

It is never worth a fight!

You know, as soon as I relaxed (because I tightened up when he did, in anticipation) and I told him, “ok, that can be enough for today”, he relaxed and was a perfect gentleman again.

He stood there perfectly, let me dismount without issue, and we walked over to the tack shed to take the tack off and get groomed. He remained a sweetheart and stood without being tied, loved the grooming, and was very gentle and attentive the whole time.

However, I’m sure that if I had made the wrong decision in that moment to push, to make him do what I wanted just because, it would not have worked out to my benefit or his.

Those split decisions mean a lot to your safety, your relationship, and your training.

The next day was another beautiful sunny 45 degrees so we tried riding again and this time we walked and trotted around the arena and down the same trail without even a little glitch.

I was even able to do it all over again on the next day. Three days in a row and he was even better the third day. He was a lot more energetic and happier, so we cantered a bit, but then I got a little timid as he started to get too playful with me. Maybe next time.

My takeaways from this past week:

Have you had a situation like this with your horse? I’d love to hear about it in the comments.