After last week’s hectic schedule, I decided this week I would make sure to take breaks. Or at least try to remind myself to take breaks and time to relax. But you know how that goes sometimes.

Life can get full and the days can fly by. So, Monday disappeared before I knew it and I looked up around 10:00 pm. Tuesday started a little slower but quickly got packed and busy. However, in the late afternoon, I decided to force myself to take a break and relax.

Since it was nice out I decided to just sit down by the pond and just watch the fish for a while. If you remember from a previous blog, this is my happy place when I’m not with my horses.

So, I sat down on the edge of the pond and put my feet in the nice cold water. Then I started to just watch the fish as they swam around, picked at the plants for food, and even came over to check out my feet. I started to focus on their coloring, which ones followed which, how they grouped together in little clicks, and so on.

It was really fascinating.

It was so nice and relaxing that I just zoned out. You know that feeling where everything else in life just drops off and all you can think about is one solitary thought. At that moment it was just, “beautiful”. And with that one thought came a wave of peace and tranquility and the world around me was gone.

I guess watching the fish and not thinking about anything else except how happy I was at that moment put me in a meditative state. I don’t know how long I zoned out, but all of a sudden, I saw something move on my left.

And when I looked down it was a frog! Yes, a little frog had jumped up right next to me. It was so close it was almost touching my hip. I was shocked to see this little guy sitting there and actually looking up at me as I looked down at him. He was so cute!

I thought for sure he would be jumping away any second, but he didn’t. He just stayed there. I then got to really look at him and see the beautiful coloring. He was brown and tan with little geometric shapes, mainly squares, on his back with two brighter colored lines running down his back. I had never seen a frog that was so perfectly designed. The squares or rectangles on his back even followed a pattern down his back in two columns.

If I had seen a painting of this I would have thought it was too perfectly patterned and not real. But, here it was, right in front of me. I later looked it up and he is a Pickerel Frog.

Funny thing is that I never got frogs for my pond, just fish. So, this little guy showed up from somewhere far off just to enjoy my pond. There isn’t another water source for miles. So, I don’t know where he came from or how far he had to travel to get here. I thought, “how lucky am I that this little guy blessed me with his presence.  And I hope he is enjoying the pond”. 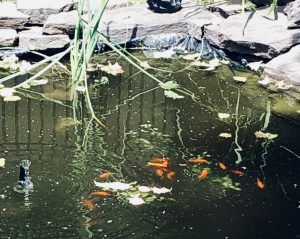 I didn’t want to move and scare him so I then went back to watching the fish. Then I noticed another frog on the other side of the pond, sitting in a low spot just staring at me (or maybe at the other frog sitting next to me). All I could see was his two little eyes over the water. Then he swam over to my side (within arm’s reach) and sat on a rock in the water and joined us.

For a second there I thought of the old Alfred Hitchcock movie “The Birds”, except with frogs, and then quickly laughed that off. There were only two frogs, so far.

Then something moved to my right. I looked slowly and saw a blue jay and a robin sitting on the rocks near me drinking water. They then were joined by a beautiful red cardinal. I just watched them enjoy the water. Getting a closer look, I realized how bright and colorful they each were. More so than what I’ve seen at a distance. The blue jay was bigger than the other two and much more aggressive.

I couldn’t believe how close they were to me and they didn’t seem to care. They were content and enjoying the pond too. After a little bit, they flew up to the tree limbs hanging over the pond and other little sparrows came down to drink. They were all sharing their time in the pond. Then they left, sat on the fence and two morning doves came in for their drink and took a quick bath in the water.

They seemed to have their own system on how to share the water. My little pond had become a watering hole for quite a few wild animals. The night before I had even seen a fox come over and drink from it.

Now with the birds in the trees close by, the frogs sitting close, and the fish swimming around my feet I felt like I was in heaven. I was so happy, content, and peaceful.

By the way, the little frogs sitting next to me were still there through all of this. I was amazed.

Then one more thing happened! I swear, I thought I was either dreaming or in the twilight zone now.

I heard this noise and I saw a small squirrel climb down the tree, run along the top of the fence, down the gate, and over to the pond. He started rummaging around the ferns on the other side of the pond and found a peanut. He must have buried it there earlier. Then he sat down on the edge of the pond and ate his peanut. He knew I was there because he was right in front of me. He even looked up and stared at me a while as he was eating.

I couldn’t believe it! I was sitting next to two frogs, fish were swimming around my feet, I was watching birds fly in and drink water, and having lunch with a squirrel. I felt like I was in that commercial about Johnsonville breakfast sausages…

I was really excited about the whole thing and wished that I had brought my phone with me so I could take pictures.  Because I thought, “no one is going to believe this, even I’m having trouble believing it myself”. I could feel myself getting more excited about the amazing wild animals all around me and I could also hear myself saying, “calm down, calm down”.

But it was too late.

I had been sitting on this rock for a long time and my rear end had fallen asleep. So, I moved around to readjust, but that meant I had to move my hands, arms, head, legs, and everything else. Even though I did it as slow as possible, that movement plus my heightened emotions were too much for the animals around me.

The frog sitting next to me jumped into the pond, the other frog joined him and swam under some leaves, the fish went and hid in the deep end, the birds flew off, and the squirrel ran up the tree and disappeared.

Then I had to think about what just happened. You know me – always asking why?

Here are the answers I came up with: 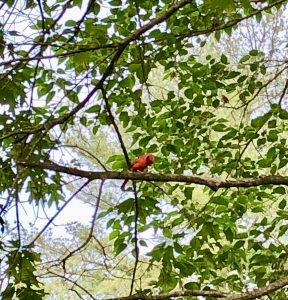 I then got up and moved away from the pond.  I sat at the patio table and just watched the pond as I thought about what had just happened.

I was very grateful for the time I shared with the animals. It felt like it had only been there for about 15 minutes, but when I looked at my watch, it had been about an hour and a half!

I thought, “This is how I feel when I’m with my horses too.” And I told myself, “Duh, horses are wild animals too that have been domesticated. But they still have their wild instincts.” I could totally see the same thing happening with my horses that happened in this experience with the wild animals.

I am a firm believer that horses are attracted to you when you are relaxed and happy. Because in that state of mind you are not considered a threat, but instead someone they want to be around. They are attracted to the happiness inside you and the calmness you feel.

And this was just reinforced and proven to me again through the hour and a half that I shared with the wild animals around my pond.

My Takeaways from this experience:

So, next time you go to your horse try relaxing first and then just being there watching nature unfold around you. Then when you get in the zone…go do something fun with your horse.

Let me know in the comments what you’ve experienced with nature that was precious to you.

Ps… the pictures in this blog were taken after I went back and sat at the patio table. The pond was still active with life. And here is a video of the Robin who came back and decided to take a bath in the deep end.

Let me know some of your experiences in the comments below. I love to hear your stories.