I have another story for you today.

I want to tell you about something that happened to me in 2005 that changed the way I looked at horses forever.

It was a morning like any other morning as I drove to the barn to look after my 2 horses, Jazz and his son Apollo.

Before he was born I was hoping Apollo would be a bay paint like his dad but instead he came out a beautiful bay foal just like his mama, who was a racehorse right off the track in Del Mar.

I couldn’t have been happier with my new baby boy. I worked with him and trained him and he, his dad Jazz and I were inseparable.

However, one day I went to the barn and as I got there, I could immediately tell something was wrong. There was tension in the air.

Unusually, Jazz was outside his stall and was frantically pacing about soaked in sweat. Something was really wrong.

I soon discovered that horse thieves had come in the night and stolen some of the horses from the stables including Apollo. Jazz was understandably distressed because they had taken his son. I wasn’t much better either. 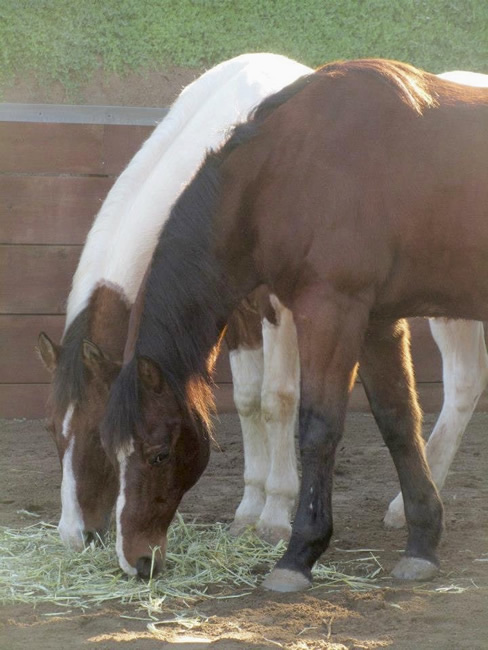 They had obviously tried to steal Jazz as well, but he fought and refused to get in the trailer. He was such a handful, they just left him. Thank goodness for his fighting spirit. Plus, he had come from an abusive situation, so he probably knew instinctively these were not good men.

However, Apollo liked people and had never had a bad thing happen to him. He had not learned that some people are not to be trusted. But I was determined to find our baby and vowed to get him back whatever it took.

So I spent countless hours driving around the area, visiting stables, and knocking on doors. I placed ads in the local papers, I talked to people at the feed store and tried everything I could think of. But I kept drawing a blank.

Lots of people told me to give up and that I was wasting my time. But my intention was so strong that there was no question in my mind or my heart that I would find him.

12 months went by and still no sign of Apollo. But I never gave up and continued to contact everyone I knew to ask them to keep a look out. This was back in the day, way before Facebook!

Then one day I got a call from a friend who lived near the Mexican border who said she thought she had seen an advert in the horse trader magazine for a horse that looked just like Apollo.

Having rushed out and bought the magazine, I frantically flicked through the pages trying to find the advert. There it was!

And I knew instantly it was Apollo.

I called the number of the stables in the ad and purchased him then and there over the phone. I never said a word about him being stolen as I wasn’t sure whether I was dealing with the thieves or not.

So, you’re probably asking yourself, if he was down by the border how come he didn’t end up in Mexico? And what had happened to him in the year since had been taken?

It turns out that the thieves had unloaded the horses on the U.S. side of the Mexican border before trying to sell them in Mexico. The owner of stables said the men tried to get Apollo back into the trailer, but he wouldn’t go.

He said Apollo turned into a crazy horse, so they just left him. He must have learned that from his father, Jazz, from the first encounter.

The owner had tried to work with Apollo after the men abandoned him, but said he was too unruly, wild, and dangerous. So, he decided to just get rid of him. That’s when he put the advert in the horse trader.

I immediately got a trailer and went to pick Apollo up. When I got there, the owner of the stables, a tough, old cowboy took one look at little ‘ol me and told me that this stallion was too much for me to handle and I’d never be able to get him into the trailer.

Little did he know!

As I’d hoped, Apollo recognized me the minute he saw me and started to whinny. He kicked open the door to his stall and ran over towards me before I could even get to him.

The old cowboy didn’t know what was happening and started to pick up a whip to stop him. I grabbed his arm and said, “No, let him come”. So, he stepped back to see what was going to happen. I think he was secretly hoping Apollo would run right over me.

Apollo came galloping over and came to a perfect stop right in front of me and just put his head down into my arms. As you can imagine, the cowboy was speechless. 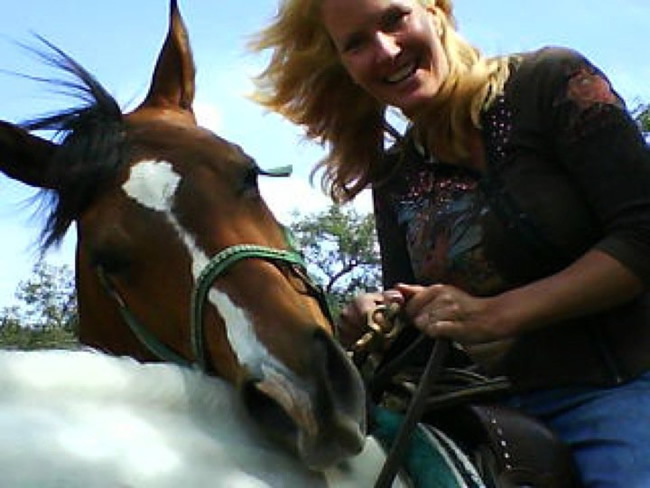 “He’s my horse” I told him quietly as Apollo stood there in our embrace and the two of us just stayed like that for what seemed like ages. And yes, the tears were streaming down my face in joy.

When it came to loading him, I walked over to the trailer, with Apollo still by my side, opened up the trailer and told Apollo that he was coming home with me.

And as easily as you can imagine, he walked straight up in and looked back at me as if to say, “OK mom, let’s go home now”. All without a halter or rope.

The old cowboy turned to me in astonishment, “How the hell did you teach him to do that?” he asked.

“I didn’t teach him,” I said, “he knows he is safe with me and because he trusts me I get his cooperation.”

As I drove off, I looked in my rearview mirror and could see that old cowboy stood there staring after us, still with the pained look of confusion on his face.

As we hit the highway, the relief broke over me and I pretty much cried all the way home and I’m sure I could feel Apollo’s joy and relief from behind me as well.

We’ve been together ever since. From birth to now, minus one year, has been 30 years together. I love him dearly and am blessed to have found him again.

I hope you and your horse have that same kind of love and confidence with each other that Apollo and I share.

As always, I’d love to read your Comments and hear your feedback so please share below. Thanks!