Are you afraid of thunderstorms?

Today instead of a lesson I just want to tell you a story, or two…

I live in Maryland and anyone who has been here knows that we get lots of rain. On average I would say we get rain at least once a week. However, it is usually just a regular rainstorm, not a thunderstorm. The difference is that a regular rainstorm doesn’t have lighting and thunder attached.

When I first got back to Maryland, the first few rains that we had, I would run outside just to soak it up. It was so nice to feel the rain along with the sun in the summer. What a great combination…warm summer rain. This was very different from the rain I was used to in California during winter.

Then I had my first thunderstorm since moving back to Maryland and my fear memories came right back. When there were severe thunderstorms growing up, our electricity would go out every time and we would be without lights, heat or AC, and the ability to cook.

That wasn’t a real problem for me during the day, but at night, when the lights went out and all of a sudden, I was plunged into darkness along with the sharp cracks of lighting and the loud rumbles of thunder, I was terrified.

My bedroom was in the basement of the house. So, there were just a few small windows around to bring in natural light. Add to that fact that I’m claustrophobic, you can see how this scenario freaked out a young child when the electricity went out and everything went black.

I had actually forgotten about this childhood fear when I was living in California. I lived there for 25 years and during that time I never had to go through a severe thunderstorm. I used to joke that California rain was just “mist”, not real rain. The rain drops in Maryland are huge. If you are caught in a flash thunderstorm in Maryland, you get completely soaked in seconds as it usually comes down in buckets.

So now when I experience these severe thunderstorms, I have to work through my fear memories as they come up. Luckily, the electricity has not gone out yet and I have my cats to help me through the storms. They don’t like them either.

And here’s my story – I was sitting in my bedroom reading a book with all 3 cats lounging nearby with my windows open. It was nice to be enjoying the warm day and the spring breezes. But as I was reading, I noticed it was getting a bit darker out. Nothing major, just overcast, so I thought to myself that it might rain, and I went back to reading.

Tiger, the rescued barn cat, quickly got up off the bed and slinked her way under the bed. And she’s the fearless cat. It was very strange.

As I noticed this, the big male cat Toby, jumped off the table next to me and squeezed his way under my large dresser. It was a tight fit. Then my little female, Wolfy the huntress, sprinted away from the window where she was sleeping and ran under my chair.

Ok, I was now freaked out! What did they know that I didn’t?

It was extremely odd to me that all 3 cats went from peacefully sleeping to quickly hiding under something at about the same exact time. It wasn’t as if one spooked the other and it was a chain reaction…they did this all at the same time.

You could feel that something was going on and the energy felt different. I wasn’t sure what it was, so I went outside to see if anything was wrong. It was silent!

The birds knew the same thing the cats knew. Then it hit! A flash thunderstorm that came crashing down hard and fast. It was scary.

I then went back inside and huddled up in my bedroom with the cats. Even though they were hiding. The storm was right above us when it started. There was a bolt of lightning and then instantly a loud crashing rumble of thunder.

But this storm had them back-to-back! Which told me that the storm was right on top of us.

The cats knew that the storm was coming, and it was going to be a doozy. We all stayed in the room until the storm moved away.

As the numbers got bigger, I calmed down and guess what? The cats came out from their hiding places once the storm let up. Then they went back to their starting points and acted like nothing had ever happened.

When they did that, I was sure it was now safe. I trust my animal’s instincts more than my own. That includes my cats and my horses. They are so in tune with nature and energies around them. They notice things we don’t think twice about. We just have to notice them and listen to what they are trying to tell us.

Another short story: One day I was cooking a double batch of sauteed (browned) vegetables and it got a little smoky in the kitchen. Not from burning anything, but smoky nonetheless. And I heard this horrible howl out in the living room from Tiger.

I ran to the living room (next to the kitchen) thinking something was wrong with Tiger and she was looking into the air at the smoke in the living room. Then she looked at me and howled again looking at me and then the smoke.

I realized she was warning me that the room was smoky, and she felt that there was a fire. Because she was born and lived in the wild before she came home with me, her natural instincts were telling her that smoke meant danger.

Then she came running over to me and let me pick her up and calm her down. I then opened all the windows and aired out the rooms. She watched me intently and once the smoke was gone, she went back to her room. It was so sweet that she was actually warning me about the smoke. 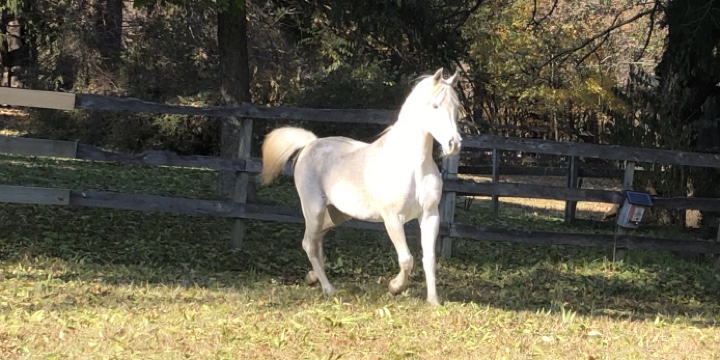 Horses have this natural ability as well.

Jazz was always able to tell when an earthquake was coming, days in advance. He would do circles in his stall and stare in one direction as if waiting for a bear to come around the corner. It was so drastically different than any of his normal behavior. It only took me once to realize that he was hearing the ground rumbling before we could. He was always right!

Animals are amazing. What experiences have you had like this with your animals…horses, cats, dogs, etc…? Let me know in the comments.

ps…Good News/Bad News Update on the Stallions – Good News is that I found Kit a great breeding facility nearby to move to where he will be well taken care of and very happy. He moves this week. Bad News is that Danny Boy passed away last week. It was a shock and was sudden. The vet is not sure what happened but thinks it may have been colic. He will be greatly missed.