Are you Moving Forward or Standing Still?

This past week has been emotionally tough for me and I really haven’t been doing much. Due to my sadness over the loss of my baby brother it feels like I am just standing still. Frozen in time. And it reminded me of this quote:

“If you are not moving forward, you are moving backward” – Mikhail Gorbachev

I understand that saying and how important it is in business. But personally, I think it’s ok to stand still every once in a while to take a moment and look at the big picture, assess the situation, or reassess, and then decide the best course of action to move forward.

It has been interesting just standing still and watching the world pass me by this past week or so. Some people would say it’s been like an out of body spiritual experience. Being there but not really being there. Being attached to my surroundings but not attached to the outcome. Kind of weird, I know. It’s been a strange experience for me.

As I’ve felt like I was watching a movie alone from the back of the theater and not a participant in my own life. While in this state I noticed something I hadn’t noticed before. My two dogs were doing things around my husband that they never had done with me. Once I started to notice this, I started watching closer. 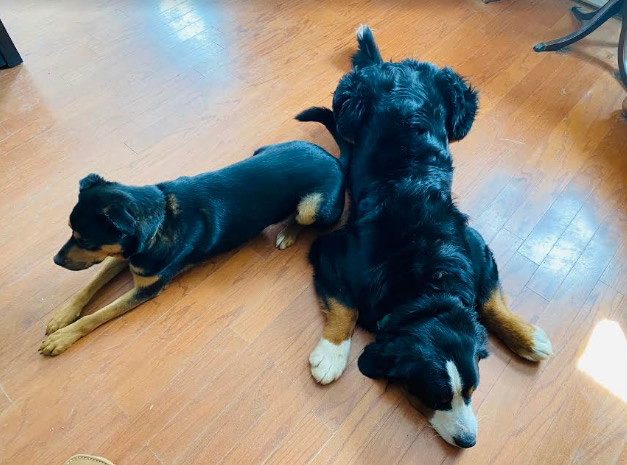 For days this was what I focused on, watching intently as if it was a science project. My brain seemed to be able to focus on something new and I had a mystery to solve. It helped me take a break from all my emotional trauma and focus on something different.

It’s amazing how focusing on something other than your problem can bring about a new perspective and bring you peace of mind.

This is what I noticed:

First Day – My husband would get his lunch and bring it into the living room, putting his plate on the coffee table. He then would turn on the TV and start watching something during his lunch break.

Our two dogs would watch him make his lunch from outside the kitchen and then they would follow him into the living room. They would be close by but still respectful of his space and his plate of food.

Then when he sat down on the couch with his food on the coffee table, the dogs started to encroach on his space and his food. They would do it slowly and would get all the way up to sniffing the air near his plate.

Then my husband, Mark, would pick up his plate and start eating. The dogs would just lay down close to the table and looked as if they were hoping he would drop something. He never said anything to the dogs but it all seemed ok. We don’t feed the dogs table scraps so they aren’t used to getting food from us when we eat.

A few days later – The dogs were now going into the kitchen while he made his lunch and standing right behind him as he did it. Then they followed him into the living room, closer to his feet now, and again would sit down, right next to him as he placed his plate on the coffee table.

This time they got closer to him and to the plate and sniffed his food. Mark picked up his plate right before they could eat his food, but it looked like that is where it was going. Again he didn’t say anything to the dogs. He didn’t ask them to back up, to be more respectful, or say “no” when they stuck their nose so close to his food.

A few days later – Now the dogs were not only in the kitchen with him making his lunch, but now they were looking at the counter tops and one dog started to stand up on his back legs to see if there was anything on the counter that he could steel.

A few days later – The dogs were now a total nuisance, one took food off the counter while Mark was making lunch, then they were jumping up on him as he walked into the living room trying to take his food out of his hands. When he sat down the dogs jumped on him and again tried to take the food from his plate.

Now Mark is thinking this is crazy behavior and yelling at the dogs to stop as he was trying to keep his food away from the dogs. He then got up and decided to eat in the kitchen on a high counter because he couldn’t eat in the living room anymore. It was too difficult to deal with the dogs.

He didn’t see the progression as this happened and he didn’t see how he actually trained the dogs to do this behavior by not setting boundaries early on. He allowed the bad behavior when it was small and when he did this, the dogs kept pushing to see what they could get away with.

They became more aggressive. But it wasn’t because that’s how they naturally were. It’s because they were taught this behavior by what Mark DIDN’T do. He didn’t set specific and consistent boundaries from the start and when the bad behaviors were small.

On top of that, now that Mark was trying to say “no” and “stop”, the dogs were so used to him not disciplining them, that these words meant nothing to them. They didn’t listen to him and they kept pushing in. They already knew he was a push over and they could do what they wanted. So why would it be different now? In their minds.

At this point Mark looked at me and said, “Why do they listen to you but not to me? Why are they perfect, well-mannered dogs around you and not me?”. 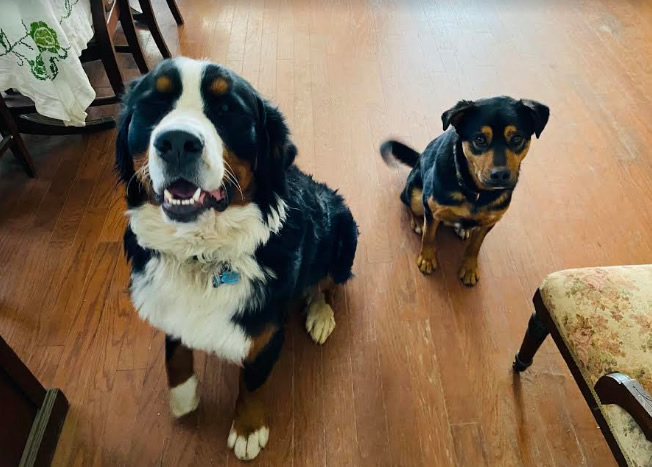 With me when I get food, the dogs stay out of the kitchen and just watch me. They stay behind the line between the kitchen and the living room. Plus they stay away from me and my food while I eat (no matter where I eat). They will just lay down quietly while I eat without bothering me.

Part of their well-mannered response to me is that I set consistent and specific boundaries from the start so there are no misunderstandings. We both know what is expected and everything just works out smoothly and naturally. This way I don’t have to “untrain” bad behaviors.

The dogs already know what I feel well-mannered behavior means, but now they are learning that it is also what Mark wants. So they can do the same thing for him that they do for me.

He can see the similarities of what I’m teaching him with the dogs to what I’ve been teaching him with Merlin, our new horse. Talking to them in their language, being a friend and a partner, and naturally showing them what you feel are good manners and what is and is not acceptable.

The second part of how and why animals in general listen to me and how we communicate so easily and naturally is part of my ‘secret sauce’.

I haven’t really talked about it before but have been prompted to do so by my coaching clients. A few of them had asked me what it takes to go deeper with your horse and create the kind of relationship where you feel at home together and truly fulfilled.

I’ll talk more about it another time, so in the meantime, think about what your boundaries are with your horse.

Take a few days to stand still and look at the big picture and assess your current situation with your horse and what you truly want with your horse. Then plan how you want to move forward to achieve your dreams.

And if you want to talk about it or would like my help, please let me know in the comments. I always enjoy talking about horses and helping whenever I can.