It was time to show the ol’ cowboy the front door!

Welcome to this week’s horse story.

I rescued my horse Jazz from a rough and tough old cowboy and Jazz seemed to understand the ordeal I had saved him from.  So in turn he looked out for me like a watchdog.  I protected him too and have been very gentle with him because of the abuse I knew he has suffered.

In other words, we were family and we shared a kind of special bond together.

I tell you all of this hoping not to ruin the following story I’m about to tell you.

I actually didn’t know too much more about Jazz’s background other than that he had a terrible time of it.   For example, I found out after I owned Jazz that his original owner had hired a cutting trainer to work with him.

I discovered this out on our first ride together when I asked him to slow down from a canter, expecting him to go gently into a trot. What actually happened though was that he came to an instant stop, on a dime!  And if I hadn’t been in a western saddle I would have been sent flying over his neck and head!

So we spent the first few years just getting to know each other and spending a lot of time playing and experimenting together.

Anyway, one day we were in the arena trying to figure out how to communicate with each other better in the saddle. I needed to figure out what certain cues meant what to him and then teach him what I meant with my cues.

Sort of me learning to speak Jazz and him learning how to speak Teddie.

It was fun and you should try this with your horse 🙂 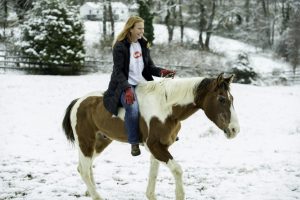 We were just doing some playtime, learning, and having fun, when this good ol’ cowboy started to watch us. After a while, he yelled at me, “Let me show you how it’s done.”

I politely declined his offer and told him we were just having fun together rather than trying to really get something specific done.

I wasn’t trying to get Jazz to jump or back up or anything like that but that’s what it must have appeared like to the cowboy because he kept badgering me and yelling at me to do this or to do that.

It was really frustrating me as I had to keep stopping and tell him that we were fine, but he couldn’t let it go. I could also tell that Jazz was getting just as frustrated with him as well and it was really messing up our playtime together.

So we carried on as best we could until the cowboy yelled that I was just ‘babying’ my horse too much and I was ‘stupid’.

I’d had enough and I think Jazz had too because we both looked up at the same time and gave him the ‘glare stare’.

Ladies, you know the one I’m talking about?

So I said, “Fine, you get on and show me what you are trying to tell me to do that I’m supposedly doing wrong.”

As I got off Jazz I whispered in his ear, “It’s ok… you can do whatever you like with this guy. You don’t have to be as gentle as you are with me.”

So the cowboy got on, pulled the reigns tight, whacked Jazz on his neck with the end of the reins, and then kicked him in the side with his spurs.

Jazz turned in my direction with a look of, “It’s ok, I got this Mom.”

So I waited to see what was about to happen next… 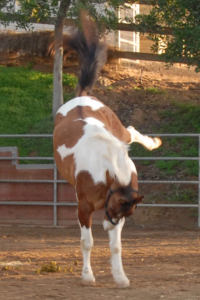 Which was Jazz rearing straight up and then planting his front feet hard into the ground as he raised his butt up and kicking as hard as he could with his back legs.

As Jazz happily, and proudly, trotted over to me I watched as the cowboy slowly got back to his feet and brushed himself off.

It was a James Bond fall – he was shaken not stirred and nothing broken.  He obviously had done this before, lots of times.  Go figure.

Instead of realizing that he had done something harsh that Jazz didn’t appreciate, the cowboy started yelling at him, and then he picked up a whip and started coming at Jazz as if he was intending to beat him to within an inch of his life.

I instantly became a huge mama bear and started yelling at this guy who was at least twice my size. I grabbed the whip out of his hand and told him he got what he deserved for what he’d done to my horse and that if he ever came near him again, he’d get what was coming to him.

I think the cowboy would have fancied his chances against me, but standing right behind me was Jazz who was staring at him with ears pinned back and teeth bared ready for another fight.

The cowboy turned on his heels and slowly trudged off, rubbing his battered body as he went. Good riddance to bad attitude and bad manners.

I know I shouldn’t say it but I have to tell you I was so proud of Jazz as he trotted over to me with the look of pride and joy in his face. I could swear he was smiling just as hard as I was!

Then when he stood behind me protecting me as well I knew we would always be best friends and perfect partners together, no matter what we did together.

You know how it is when you meet someone and you just get each other? 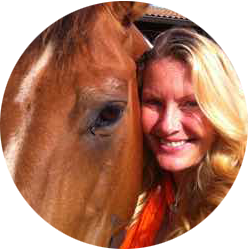 That’s how it’s been for Jazz and me and it has just gotten better every year since and here we are 28 years later.

There’s no great learning in today’s story other than the importance of family, trust, patience, understanding, and being there for each other.  You need to protect your family, even your furry family members.

I sincerely wish for you the kind of relationship I have with Jazz, where every day is a blessing and for this, I am truly grateful.

And don’t get me wrong, I love my cowboys and have quite a lot of them as good friends.  I’m not saying that all cowboys are like this one man, as I know they aren’t.  But this one was just too mean to be around my horse.

As always, feel free to drop me a line by writing in the comments below. I look forward to hearing from you!