What dropping U.S. divorce rates mean for your horse

How’s your week been?

I’ve been busy cleaning and painting the house for my Dad’s visit in 3 weeks as it will be his first visit out here.

It’s funny how we feel we have to make the effort for our parents, isn’t it?

But I guess it’s only right given the effort they made raising us.

Here’s my new kitchen – all new paint, cleaned spotless, and even added a backsplash on the walls! 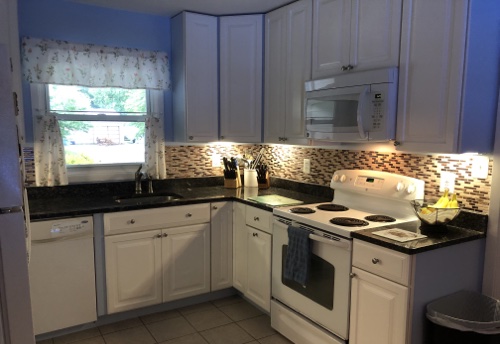 Anyway, during a break away from the painting I was flicking through a magazine and started reading an article on dating and divorce.

We tend to think that divorce is sky high and always on the increase but it turns out the opposite is true.

U.S. divorce rate have dropped 18 percent from 2008 to 2016, according to University of Maryland sociology professor Philip Cohen.

The reason is that Generation X and especially millennials are being pickier about who they marry, tying the knot at older ages when education, careers and finances are on track.

The article also looked at how long couples had been together before getting married.

Researchers at Emory University surveyed over 3,000 people in the United States who are, or have been married, about various aspects of their dating, engagements, and their weddings.

Although their primary focus was the cost of a wedding, they included other factors predicting marital dissolution.

Compared to dating less than one year before a marriage proposal, dating one to two years significantly dropped the future likelihood of divorce by about 20 percent.

Dating three or more years before marriage decreased the likelihood of divorce to about 50 percent.

Interesting, huh? People and their relationships.

Then I started thinking about horses.

I’ve worked with so many women at my clinics who are desperate for a relationship with their horse but they have no idea how to go about it.

Maybe, they’ve been to a clinic where the trainer was able to get the horse to follow all his commands within minutes.

Or they’ve read about these competitions where trainers were able to break and ride a wild horse within a few hours.

If that’s your thing, then OK, but these trainers don’t have a relationship with that horse, they have control of it.

That kind of situation is more like a one-night stand than a relationship.

And when it’s your own horse, aren’t you looking for something more personal and long lasting?

Something more connected at a heart level?

That’s what I’ve always wanted with my horses.

So what can we learn from the studies and stat’s above that I read in the magazine?

They clearly show that the longer a couple spent getting to know each other, the more successful their marriage was likely to be.

And it makes perfect sense when you think about it.

So why don’t we take the same approach with our horses?

That would make sense too, right?

Here are a few suggestions which will help in forming a lasting relationship with your horse:

I sometimes refer to this approach as ‘romancing your horse’.

It has to be approached from his point of view.

What would make him happy? Remember to put yourself in a happy state of mind while being present as well.

Well, so does your horse.