I remember watching the old westerns when I was younger and loved the chases on horseback, the beautiful scenery and the open wild wild west. Then they would show the cattle and horse rustlers and the adventure started to get them back. That made good TV back then, but I didn’t think that in 2020 I would have to worry about horse thieves.

Apparently, I was wrong!

It may have been fun to watch on TV and get excited to see the good guys win after getting their horses back. But when it happens in real life, it’s not so exciting. It’s scary. I watch out for things like keeping the gates shut and the fence lines kept up so my horses don’t get out, but I really wasn’t worried about anyone stealing my horses.

We are on an 18-acre farm, with an additional 50 acres of trees and farmland. We are set back off of an old country road and we aren’t that visible. So, that is another reason I really didn’t worry about it. I’ve fenced off the driveway and 2/3rds of the farm. But it’s a work in progress as there are still lots of things that need fixing up on the farm.

Well, my husband and I went away for a 3-day holiday and we had our ranch hand taking care of the horses. On our way back, we got a call from John, our ranch hand, who said that he had found Jazz out in the field on Tuesday morning, instead of in his stall where he should have been, and badly cut up.

I called the vet and “put the metal to the pedal” as they say and got there when the vet did. Turns out, the horses had been put up Monday night, tucked away in their comfy stalls and someone had come onto the property after the ranch hand left. I’m not sure if it was one or two people, but the first horse they tried to steal was my Jazz.

That was probably the best and the worst decision they made. If you’ve heard Jazz’s story before I rescued him, he was badly abused by a man and had turned into a fighter!

Jazz is a very loving horse, but you have to earn his friendship and trust. If he doesn’t trust you or like you, look out…he will absolutely ignore you unless you try to “force” him to do something. Then he fights back. The harder you fight him, the harder he fights back. That is something I love and admire about him. He doesn’t take anyone’s crap.

Well, due to the injuries, cuts, and wounds on Jazz’s face, the vet and I deduced that they put the halter on Jazz while he was in his stall, but when they took him out of the stall and tried to take him out of the pasture without his son Apollo and without me being there, he refused. I actually trained him when he was young not to go out of his pasture with anyone else but me.

The fight must have escalated and the rustler must have become more forceful and vicious. And Jazz retaliated!

The deep wounds on his face were from the buckle and clasp on the halter being pulled and yanked and ripped around. They even ripped up the area above his eye. He is lucky to still have an eye. He also had marks on his backside from a rope or whip. Plus, his back legs were hurt, probably from rearing up and striking and kicking out. I’m not putting pictures because it’s just heartbreaking.

Luckily, though he won the fight and remained with me on the farm. I think he also saved the other horses on the farm because he was so much trouble. He either hurt the person trying to steal him or they gave up as it was too dangerous and decided to leave the others alone. I bet they were all making quite a racket as well. The 11 horses on the farm really stick together.

We are working with Jazz’s wounds and injuries and he should be ok. He’s 33 years old and I’m so glad he still has that much fight left in him.

When I first ran into the pasture and after I cleaned off his wounds, I gave him the biggest hug around his neck. He hugged me back so hard and just snuggled into me for a while. You just knew that he was traumatized and so glad to see mama. It was heartbreaking to see how this strong wonderful horse was scared and needed a hug. He was traumatized and it left emotional scars as well as physical.

All this happened last week. Then today, 7 days later, the farrier came out to do all the horses. We started with Jazz who haltered great and came out to eat grass while the farrier worked on him. I was the one who haltered, led, and was holding him for the farrier. Normally there are no issues whatsoever, for years there has never been a problem. Plus, Jazz has had this particular farrier for the last 3 years.

Well, today he was very tentative when the farrier started working on his feet. He just buried his head into my chest and started to lick and chew. He even held onto my jacket with his mouth for reassurance. He’s never done that. 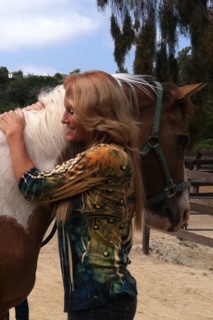 So, I knew he was very nervous. He pulled his foot away a few times and the farrier had to be extra slow and sensitive because his back legs were still hurting from the incident. The farrier was amazing with him though and helped reassure him that he wouldn’t hurt him or do anything against Jazz’s wishes.

But to see this strong willed, determined, fighter of a horse look at me with terror in his eyes for the first time ever in 30 years brought tears to my eyes! You could just feel deep down inside how scared and hurt he was from the incident. The terror was real for him and it had to be so traumatic that it broke his confidence and trust in humans. It was absolutely heartbreaking. Jazz was actually afraid of humans for the first time ever.

I am so grateful I still have Jazz and that they were not able to steal him. It’s a blessing that he fought to stay with me and his herd. And I am grateful that he didn’t get injured worse and that his injuries are going to heal.

Even though the idea of someone coming onto the property and trying to steal the horses brought out a lot of anger and fear in myself, I am trying to also look at the positive side and be grateful I still have all my babies.

This blog is not to scare you or even to really teach this week. I just want to let you know that there are still horse rustlers out there and you should look a bit closer at how you are keeping your horses safe from them. Personally, I am going to finish fencing in the property next. I’ve already put locks on the gates and stalls. Cameras in the barns are next.

I hope you and your horse always stay safe and happy together.

I’d love to hear your story about what your horse has shown you in the comments below.