The Importance of Touch

I’ve been sick for the last month and during that down time I noticed something interesting.

There seems to be two types of people when you’re sick.

The ones that are good caretakers who bring you soup, medicine, and make sure you’re tucked in and taken care of and those that are afraid of getting sick so they do what they can from a distance.

When I was a child, my mother was of course the good caretaker as she would put vapor rub on my chest and let me curl up in her lap. She would rub my head too and that always made me feel better.

But this time my caretaker was the type that did everything needed to take care of me from a distance and the one thing I noticed that was missing was touch.

I was surprised by how different that made the healing process. I really missed that comforting hug, a warm hand to hold for a moment, or even a cold palm on my feverish forehead.

But when I was well enough to go to the barn my horses were all about touch. They not only knew I was sick but they must have also known that I was craving a loving touch to make me feel better.

My horses along with my cat were the ones that reminded me how important touch really is. Which can only mean it’s important to them too.

When I was growing up, I remember lots of horse people telling me, “Don’t touch your horse. He’s an animal not a pet.” I still hear it sometimes from trainers today.

I never agreed with it though because I find so much communication and connection takes place during the times when you are touching and being close to your horse. 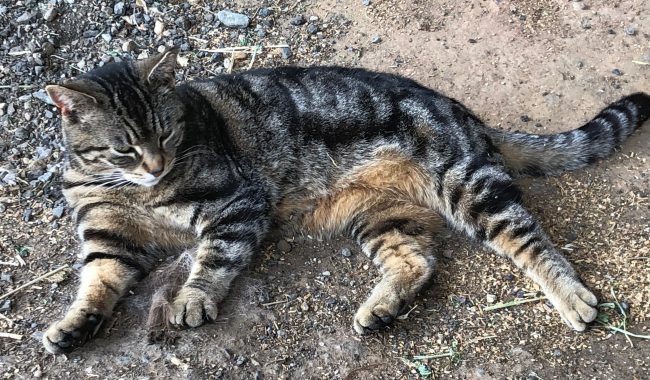 Here’s another story to back up my theory.

When I moved to my new farm a few years ago there was a feral cat that would hunt on the farm and slept in the barn. He was very young and very small.

He was also very afraid of people and so I only saw him from a distance but I really liked having him around so I would leave food and water in the barn for him.

After a while he started coming closer and when I went to the barn he would run up knowing that I was bringing cat food.

This went on for a while and each time he would come closer and closer and trust more and more. Soon enough, he was running up to me and rubbing against my legs

We’ve now reached the point that he follows me around the farm and can’t wait until I sit down so he can jump in my lap and get pet. It’s his favorite time of the day! 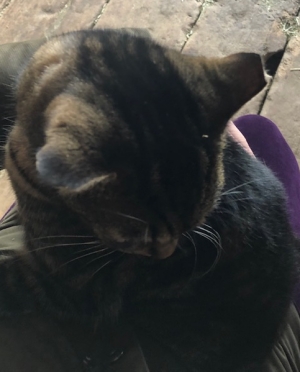 He’s still very skittish with other humans but can’t wait to get touched by me. Sometimes he will come up to me while I’m doing chores and meow at me to hurry up and sit down so we can have our time together.

It’s almost as if he didn’t know what he was missing before but now he has some love, attention and cuddle time, has to have it on a daily basis.

So, it’s not just humans that feel touch is important… it’s cats, dogs, and horses too!

Did you know… babies who are not held, nuzzled, and hugged enough can stop growing, and if the situation lasts long enough, can even die.

And according to recent scientific studies at Berkley, everyday forms of touch can bring emotional balance and better health.

There are incredible emotional and physical health benefits that come from touch and it is truly fundamental to human communication, bonding, and health.

Studies have shown that humans can not only identify love, gratitude, and compassion from touch but they can differentiate between those kinds of touch.

There have been studies with horses and other animals that show how important touch is as well through mutual grooming and needing to be close enough to touch.

Touch has been shown to build cooperative relationships and reinforces reciprocity between different types of animals as well. Touch signals safety and trust as well as being soothing.

Basic touch can also be warm and calming to the cardiovascular system and reduce stress. Touch activates the body’s vagus nerve, which is intimately involved with our compassion response and a simple touch can trigger the release of oxytocin, aka the ‘love hormone’.

When an animal or a human feels threatened, it has been shown that a simple touch can be reassuring enough to turn off the ‘threat switch’.

If you’re interested in learning a bit more on the subject, here’s an interesting article from the NY TImes about it:

And so next time you are out with your horse don’t forget to touch him or her to show your compassion, gain trust and cooperation. Use your non-verbal communication to continue building that bond and relationship to a deeper level.