Well, it’s been another exciting week!

I finally finished renovating my backyard pond. Or should I say my “Serenity Space”.

First I had to clean the old one out, remove all the rocks, put the fish in an inside tank, pump out the water, and throw away the liner. Lots of heavy-duty manual labor. It was a good workout.

Then the renovation started. More digging – deeper, wider, and longer. The new pond is now 17 ft x 14 ft x 3 ft. Plus I added more steps into the water and ledges so I could get in and out and use it for myself as a swim pond. Fun for me and the animal life it attracts.

Then I had to build it up higher than the last one so it could withstand the rainstorms and be the highest point of the backyard. That part wasn’t so fun. But it definitely challenged my engineering skills. I like a challenge.

Once that was all done and the mechanics and design were complete, I got to have some real fun. The creative part of the project. That’s my favorite part. Making it look pretty.

The stones and rocks were put in place, the hiding places for the fish were created, and then all the plants were placed in their perfect spots. Some underwater lilies, some floating lettuce, and even some in-between water iris. Everything in different colors.

Even the plants around the pond were specifically designed and had a purpose. Many were plants that keep snakes away like marigolds and garlic. And others were plants that frogs love to hide in like Geranium and Lemongrass. There was even a “bird beach” created for the birds to play in.

After all that fun, I got to enjoy it for about two days and then all hell broke loose.

I was sitting outside this past Tuesday and I noticed a large group of squirrels and birds eating from my feeding area. I put food out for the birds and squirrels every few days. And normally there are about 6-10 birds and 2-3 squirrels there at any given time.

But something was now different. There were about 6-8 squirrels and over 20 birds. I thought this is really strange. And I had to question what I had put out for them. But it was the same food I always use.

Then it hit me. They seemed to be scurrying around in a hurry gathering food. I thought “uh oh, there must be a storm coming.” And I looked at the weather channel and they were calling for thunderstorms that night.

Because the animals seemed worried about the storm, I started to worry. I went out and got more water and supplies just in case. Good thing I listened to the animals.

Shortly after I got home I went out to sit and listen to the frogs and crickets that were in my new pond. Everything seemed fine and it was very peaceful. I was really enjoying my new “serenity space” along with the other animals. 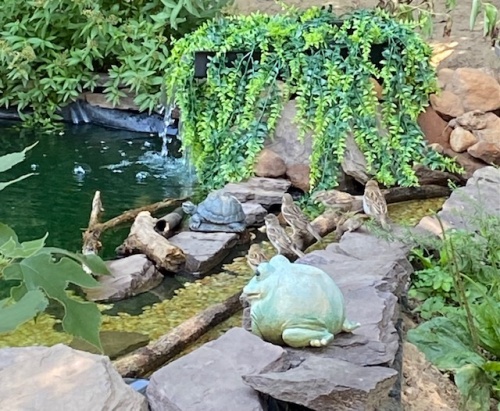 And then everything got quiet. It was too quiet. The frogs had stopped croaking, the crickets had stopped chirping, the birds and the squirrels were gone, and even the wind seemed to have stopped moving.

I realized they were all saying get inside, get to safety, and batten down the hatches as this one was going to be a biggie. I ran inside with the dogs just in time.

We got the mother of all storms!

A torrential downpour that came down mixed with hail. It was so heavy you couldn’t see anything out the windows. It was like a white out in a snowstorm. The thunder made me jump out of my skin with lightning strikes happening simultaneously.

You know what that means…the storm was on top of us!

After about 45 minutes of tremendous noise, it started to die down. But it had done some major damage. 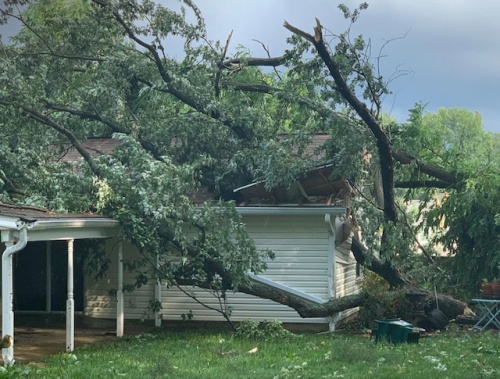 The entire city was out of power, and as I’m writing this blog, we are still out of power – 30 hours and counting. Plus there were lots of trees down. Some fell on neighbors’ homes and cars. Some fell across power lines and some closed roads.

Plus there was a lot of flooding that happened in that short 45 minutes. Our entire backyard was covered in water. It looked like a raging river. Luckily the water didn’t destroy my new pond. Almost, but not quite.

I had built a drainage mote around the pond to displace the rainwater as it rains almost every week here. Nothing like Tuesday’s storm though. I didn’t expect that. But I was lucky to have dug it out right before the storm. It did the trick and saved the pond.

So, the pond fared well as did our home – no damage.

The stillness and the silence of all the animals were very telling. My cats and dogs were still cowering in fear too. They all were saying it wasn’t safe to come out yet. Something more was yet to come. And sure enough…it did.

It was now nighttime so it was dark out. Or at least it was supposed to be dark out. The skies had turned dark orange like they were on fire. Add that to the absolute quiet and stillness in the air and my hair was standing on edge.

It was absolutely spooky. Right out of the TV series, “Stranger Things”. If you’ve seen it.

It was so bright it actually looked like daylight.

That’s when the winds started howling again and the thunder and lightning were exploding simultaneously again. We had just been in the eye of the storm for a short time. That’s what the orange skies meant.

Now it was hitting us all over again. Luckily it was over in another 45 minutes and all the noise turned into a deafening silence again. Those few minutes felt a lot longer.

Then I could hear the frogs start croaking, one at a time. And the crickets started to chime in. That’s when I finally felt safe again. I knew that if they were now out and talking to each other again, the storm was over. 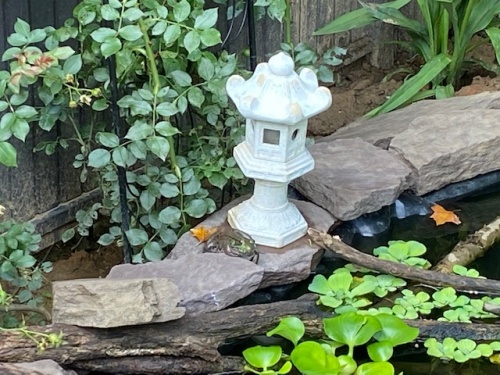 The cats came out of their hiding places and started moving around the home and the dogs got up and wanted to go outside. They all instinctually knew it was over.

And even though I went to sleep that night without power, I knew we were safe and the storm was over because of the animals. I was always a Dr. Doolittle fan growing up.

So the motto here is …

Always Listen to Your Animals!

They know things we don’t and they know when something is going to happen in the environment. Listen, watch, and learn. Animals are the best teachers I’ve ever had and I am so grateful.

This not only pertains to cats, dogs, and wild animals, but I’m sure if I had my horse in my backyard, he would have been talking to me just as loudly. With this storm, I would have had him in my living room with me and all the other animals too.

Until next week. Happy Horses! And I hope you are staying happy, healthy, and dry.