I was reminded this week of an old saying…

“A goal without a plan is just a wish”

And I had to laugh when it came back to me, because I have said that a few times to my students. So, in essence I am listening to my own advice.

It’s funny, there are three main misconceptions that I run into about me and my horses.

#1. That because I am a trainer, I am all done with my own training.

The more I know, the more I want to know.

I hope that I am blessed to be able to learn about horses not only from my horses, but also from the shared experiences of others. And as you know I am an avid researcher.

My expertise is in bringing difficult, hard to reach, shut down, and “last chance” horses back to their loving, natural selves. Horses that can be happy and compassionate with their owners. And bringing the two together to form a loving and safe partnership.

#2. That because I have had my horses all their lives, that this is the reason our relationship is always great.

Life is always changing and throwing different situations at us. Some good and some bad.

So, me and my horses are always “working” on our relationship. Just like in a marriage, there will be ups and downs and the couple just need to work through them and work it out together as a team.

#3. That because I’m a trainer, I don’t need to listen to my own advice.

Just the opposite actually. Case in point – “A goal without a plan is just a wish”

I have researched, done a lot of trial and error, worked with hundreds of horses, and put into practice everything I talk about and train.

Plus, my training is organic and is always evolving with new research and as new experiences come up.

Before I tell someone to do something or suggest any advice, it is always something I have experienced personally and something that has proven to work for me and my horses.

That means that when I work with my horses or anyone else’s horses, I take my own advice to heart first.

Every horse is different, just like people are, so being flexible and organic allows me to adjust and tweak my own training, or my personal coaching, to be perfect for the individual horse I’m working with right now.

Now, back to “A goal without a plan is just a wish”

If you’ve been following my blogs, you know that I just moved Apollo to a boarding facility. 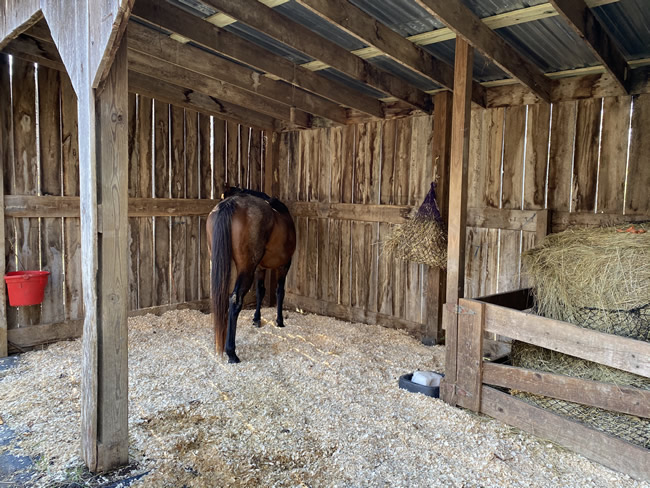 I wasn’t sure how it would go since there were a lot of factors:

I was a bit worried, but I thought I would “wing it” and do whatever I needed in the moment.

The new facility is really beautiful , I am very happy to be there and I hoped Apollo would be too but that’s not exactly how it panned out.

This is the day we moved. Apollo got in the trailer without issue but was stressed and a bit sweaty when we took him out of the trailer. It was only a 15-minute ride.

He ran around, said hello to his neighbor, Harry, who shared a fence line with him and whinnied at Ray who was across the driveway from him.

He finally settled down after a few hours and I remained for a few more hours until I felt he would be safe and calm.

However, he really wasn’t happy to have left the comfort of our farm and his friends there. But neither was I. I think he knew that too.

Most of the time I was there he paced the fence line and whinnied a lot for Ray. He also ran over to talk to Harry, but not as much.

He let me halter him and we went and walked around his new pasture and into the woods and around the hillside. He was a perfect gentleman with me but was still obviously not happy with the move.

He even acted out today and shocked me. Apollo actually kicked out and almost got me. He was mad, stressed, anxious, and lonely.

I left after a few more hours of just hanging out before I left. I just wanted to make sure he was safe.

But with him acting out and not liking the new place, I knew I had to come up with a plan. He wasn’t just going to be ok without one.

My plan for today was to interact with him and give him lots of fun things we could do together.

This was to make him feel less alone, less afraid, and more confident in himself and his surroundings.

I wanted to remind him that I was there for him and I’d never let anything happen to him.

If I could have slept in his field and stayed overnight, I would have from day 1, but that was impossible.

I did think about it though.

I took his favorite treats, his ball, we went for a walk to explore his area again and we did some games together.

It worked and he calmed down and allowed me to be closer and even groom him.

He was almost his normal self, but he still didn’t come to the gate to greet me, he didn’t whinny when he saw me like always, and he didn’t feel comfortable yet.

At least it was going in the right direction, but I was still a bit worried.

I was hopeful that he would keep getting more comfortable, but no…

He was running the fence line, whinnying to Ray, didn’t want to do anything with me again, and was unfocused and upset.

After watching this for a while I realized he just wanted to be close to his new buddies, Harry and Ray and when they all were on the corner of the fence line together, all was well.

Apollo had connected with Harry and Ray as a new herd. As long as he could see both of them and be as close as possible, he was happy.

At least he had found friends and was feeling a connection with the other horses. They all got along well.

I just wanted Apollo to feel safe, comfortable, and enjoy his new home.

Apollo wanted the same thing I did, but he came up with his own plan.

And his plan was very different from mine.

I showed up on Day 5 and he had pushed down his fence and jumped it. He was now in Harry’s pasture and fortunately they were doing great.

There had been a really bad thunderstorm in the night and Apollo didn’t want to be alone. So, he figured out a way to be with Harry.

The two of them acted like they had been a herd forever.

I was happy for Apollo, but also afraid of how Harry’s owner would act.

Luckily, she was happy for Harry as she was actually going to move him into another pasture with another horse for companionship.

Now she didn’t have to.

We decided just to keep the gate between the two pastures open and they could both come and go as they wanted.

Here’s a cute video of Day 5 when Apollo and Harry were first together:

Apollo whinnied when he saw my car and he was much more settled. He actually seemed very happy and content.

He actually wanted to be with Harry over me this day, but that was fine with me.

He was gaining his confidence back and I was there to help and do whatever he needed. Even if that meant just hanging out with both of them and watching their interactions.

Apollo was back to normal with me. 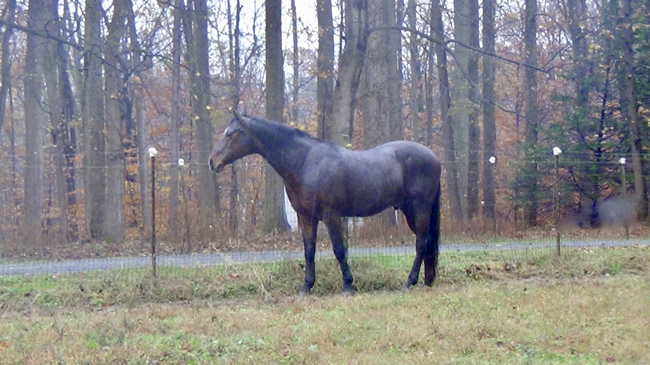 He came over to me when I got there, he whinnied to me, he nuzzled me when I sat down, he let me groom him, and he followed me around for a bit while I cleaned his pasture.

Ah, it felt so good to see him happy and know that he felt safe with Harry.

Even though his plan was different than mine, I’m glad he had a plan and it worked out so well.

And you know what?

Even though our connection had been broken for a few days, when it came back, it became even stronger than it was beforehand.

We are an even stronger team now.

We went for a walk around the entire farm and he was confident, calm, gentle, and so willing to go anywhere and do anything with me.

This was even different. He used to be the “scaredy cat” and would only follow Jazz.

Apollo was coming into his own and becoming his own individual personality. It was beautiful to see.

“A goal without a plan is just a wish”

If you have any similar experiences, I’d love to hear them in the comments section.