Have you ever heard that expression? “Monkey See – Monkey Do”

I wasn’t doing it because I was trying to irritate him or tease him as you might see in a teenager doing this to a friend. I was just a very young child who idolized her father. I was also an only child at this time.

I was very attached to my dad. Watching him is how I learned how to do many things as I grew up. I would watch intently how he picked up his glass and took a drink. Then I would try to do the same thing. I would do this with how he ate, how he walked, and how he spoke, and other physical mannerisms.

To this day, when people see my father and I together, or they know my father well and then they meet me, they always say, “You are exactly like your father”.

A fact that I am very proud of, I must say, with a big smile on my face.

That is how children learn. They watch others throughout their youth, trying on different aspects, keeping some things and throwing away others. Until they become their own individual personality.

Well, that’s how horses learn too. 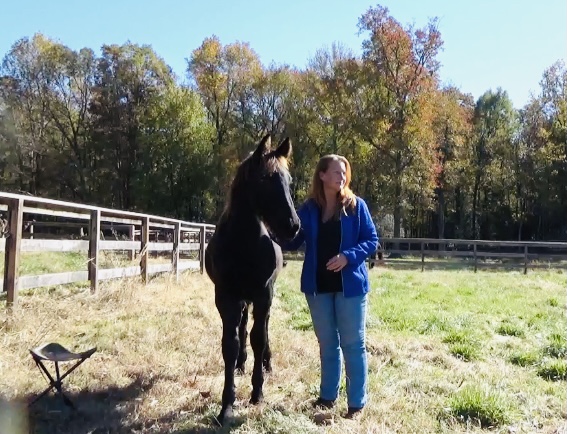 I’ve seen this a lot when training horses. When I would have Jazz in the arena working on some new lesson, D’Artagnan and Apollo would be watching intently. Then when it was their turn to come out and do the same lesson, they would already be close to accomplishing it.

It was as if they were saying, “watch mom, I can do it too”. And the last one in the arena would normally have the lesson down before I could even teach them and they would be saying, “watch how well I can do it mom”. Almost competing with each other.

But this behavior of watching and learning starts much earlier in horses too. I’ve seen this with Merlin, my 7-month-old Friesian.

In the last month, we have been working on basics like picking up his feet and picking out his hooves to get ready for a farrier, haltering, leading, grooming at liberty, and fly spray.

The number one thing we’ve been working on is our relationship and our bond. You know that “know, like, trust” thing.

I want him to get to know me, inside and out. I want him to honestly like being around me and actually want to be around me. I want him to trust me. To know that anything I do, as new as it will be for him, that he can trust that I only have his best interest at heart and will never do anything to hurt him.

So far he has been amazing. He has accomplished everything with very little effort on my part and is extremely willing, loving, and courageous. I hate to even say that out loud as I’m afraid I will jinx myself.

During this month I have also been weaning him from his mother. Even that is going really well. He seems to be taking to it better than his mother is.

Merlin is really enjoying going into the pasture next to his mother and the herd so he can have his own pasture, his own grass, his own water, and he struts around very proud of himself. It is really cute.

But then the hiccup showed up.

A little background before I continue…

Merlin is in a herd of four at the moment and every once in a while one or more other mares gets moved in or out. But the basic four are Merlin, his mother, a quarter horse colt the same age as Merlin, and another brood mare.

Well, Merlin’s mother is allowed to tell Merlin what to do and he listens well to her. The other broodmare also pushes Merlin around when she needs to, but then he runs to mom and she may or may not step in. And Merlin is able to push around the little colt, but for the most part the colt just follows him around and does whatever he does.

Then when a new mare shows up she usually fits right above Merlin in the hierarchy. But I’ve seen him push back to keep his #3 position and sometimes he wins and sometimes he doesn’t. Merlin is just mimicking what he has seen from his mother and the brood mare above him with the new mares. It’s cute to watch him try.

I swear sometimes you can see the new mare looking at his posturing and saying, “Seriously? I don’t think so little one”. It has been funny to watch. But also very interesting. I love watching the herd dynamics.

One time when the new mare conceded and let Merlin move her in a certain direction, he pranced off, head high, tail high, and was so proud of himself.

So back to now…

I want to keep my husband in the loop (involved in the training) and keep a good relationship between them going as well. So he has been coming out and hanging out with the herd weekly.

Today I separated Merlin and his mother into the next pasture so my husband and I could enjoy them without any herd drama. Today was about the relationship and the bonding between my husband and Merlin only.

Then Merlin decided to check out my husband. Merlin was used to me being out 3-4 times a week, but my husband only came out once a week. So in Merlin’s mind my husband was the last one into the herd and he was on the bottom of the pecking order. He learned this from his own herd.

Yes, I’m sure you can see where this is going.

Merlin was very sweet at first as usual, but then you could see the lightbulb go off in his head. And he started to get a bit pushy. You could see him trying to figure out how to do this.

Luckily he was slow as he did this. He got closer and closer, sniffing and touching gently. Merlin went from his hooves being about a foot away from my husband’s feet to now having one hoof in between my husband’s two feet and his chest right next to my husband’s head.

I knew what was coming next, but I also knew that it had to be my husband to ask him to move off and not me. He wasn’t in danger as Merlin was not being aggressive, he was just slowly pushing his boundaries a bit. Something he had never done before with me or my husband.

It was interesting because Merlin was so slow, it was as if he was waiting for my husband to react as the mares did. Merlin was just mimicking what he had done with the mares.

My husband put his hand on Merlin’s chest and scratched him as he slowly and calmly stood up. My husband is 6”6” and 270 lbs, so he could be very intimidating to Merlin if he wanted to be. But he stayed as slow and calming as possible. No surprises and no sudden movements on either side. 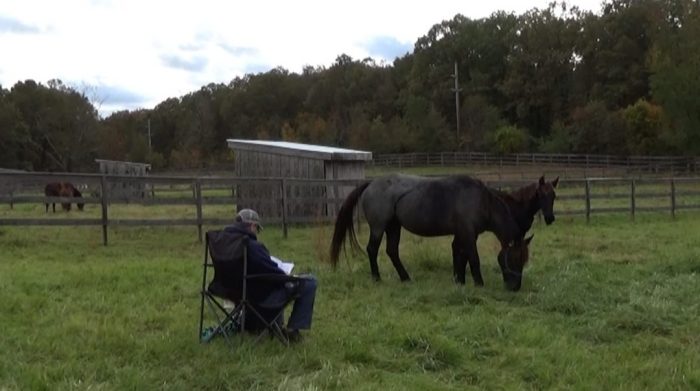 He then stepped back a few steps and got behind the chair and picked up his reed and paused. You could see Merlin really thinking about this move and what his next move should be. He was not only processing, but he was also calculating his next move.

Merlin then sniffed the chair and pushed it over. Neither one of them moved or flinched. Now it was face to face. After another pause, Merlin walked in to gently push my husband away with his head and in that second my husband gently asked him to back up using the reed. Merlin stopped to think and then he backed up and just relaxed.

You could see the shift in his body and his demeanor. Merlin looked like, “yup, that was what was supposed to happen”.

My husband then went over and scratched Merlin and all was right with the world again. In that little interaction my husband went from being bottom of the herd to being an equal. And Merlin was very happy with himself and with the results.

The best part of that interaction was that Merlin reacted that way because he saw my husband as being a part of the herd. He was never an outsider or “the human that brings food”. He was a part of the family in Merlin’s mind.

Merlin is really becoming a part of our family in so many ways and he has accepted both of us as a part of his family. I think that is why the weaning has been so easy and smooth. Because Merlin feels he is still with family, even though he’s not with his mother. It is a real blessing!

Merlin’s mother is going to another farm in January for a few months, but he will still have the other colt with him for a while and other broodmares in and out of his pasture. Plus I will soon add a yearling colt or two so they can also teach him more “horse stuff”.