Recently, I was trying to remember what my first training experience was, how old I was, and was it my cat, dog, or horse.

After much thought, I remembered…

It was actually my baby brother, Bryan.

I was 15 years old and my brother was about 12 months old. He had just started saying his first words. His first word was “mama”.

I don’t remember if he was saying “dada” yet but it wasn’t far behind. However, I remember he was really good at saying “babi”. This was his word for his bottle. When he was hungry and wanted his bottle, he said “babi”, and he said it a lot.

My grandfather was a very important figure in my life and I adored him. So, my thought was to get Bryan to say my grandfather’s name as a surprise for him. I called him “Gaga”. It seemed like it would be simple enough to do since it was close to the words he was already saying. 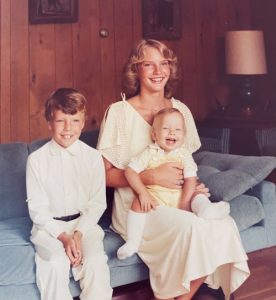 Remember, I was only 15 and had NEVER tried training anything before. I was winging it.

My next step was to try to get his attention on me. So I moved his bottle and got his attention. Then I asked him to say “gaga”. Again, that didn’t work. He just put his bottle back in his mouth and stared at me.

Then he stopped drinking and was just holding his bottle in his lap and was watching me. Aha, let’s try again. I then said, “say gaga, say gaga”. Nope, nothing. Hmmmm. So, I decided to take his bottle away from him to try to get all of his attention.

Once I started to take the bottle away, Bryan would cry for his “babi”. And since I felt bad about taking it away, I handed it right back. I then tried asking him again to, “say gaga”. No response.

That didn’t seem to do anything as he was only saying “babi”. I took my hand off his bottle and paused trying to figure out what to do next.

Well, the next time I touched his bottle he said, “babi”. I asked again for “gaga” and he finally said “gaga”. Yay. So I stopped touching his bottle and clapped my hands and laughed telling him how good he was. He then said “gaga” again and laughed.

Yippee, I thought. I did it! I couldn’t wait to show my grandfather and my mother that I taught Bryan to say “gaga”. He was saying “gaga” and laughing with me.

Then I went to touch his bottle again and he immediately said, “babi-gaga”. 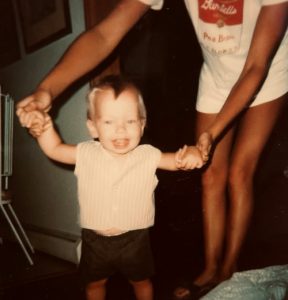 The end result was that I didn’t teach him to say his grandfather’s name, but I did teach him a new name for his bottle. But Bryan and I now had a funny experience that we shared and every time he or I said “babi-gaga”, we both would just laugh.

It became a bonding experience that we both loved.

How was he supposed to know at 12 months old that the word “gaga” was supposed to go with his grandfather?

All our experiences in life teach us lessons we carry forward that mold who we are and what we teach others. This was one of those times for me. 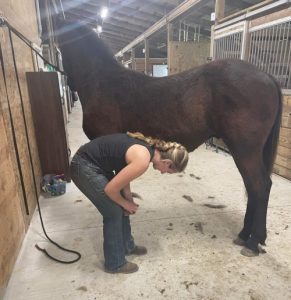 Lessons learned from this that I now use when working with my horses:

It’s funny looking back how certain things, good and bad, have helped me develop my method of training both horses and humans. I am so grateful for all my experiences.

Do you have any fun stories you would like to share about what you’ve learned with your horse? You can write them in the comments section. I love to hear your stories.

Changing Dominance in the Herd