Are you actually saying what you think you’re saying?

As a follow up from last week’s blog, I talked about my mind thinking I was doing one thing but seeing that my body was actually doing something else. I wonder how many times we do that? Think one thing but do another without knowing it. Well, let’s talk about that for a bit.

Did you know that if you walk over to your horse in the field, who is standing still, and put a halter on him, that you are actually telling your horse (in his language) that you are agreeing to do things his way for a little while?

Then when you take your horse from the field out onto the grass, maybe on your way to the arena to work, and your horse stops to take a bite of grass and pulls you, he thinks he is in charge. Then when you get upset or frustrated and pull him off of the grass, you are breaking your agreement with your horse because you told him, in your body language, that he was in charge for a bit.

So in this instance, your horse thinks you told him that you would do things his way for a bit and that he was taking you to the good grass. But you thought that because you put a halter on your horse that he’s now going to do things your way.

So what you think you’re saying to your horse, in this instance, is actually the opposite of what he hears. This probably happens more often than we think it does, as humans don’t always think that deeply about their body language around their horses.

However, if you had asked your horse to come to you, while you were headed to him or if you were standing still, then your horse would be telling you that he will listen to you for a bit. Then after you put the halter on, your understanding and his would be the same and your trip to the arena through the grass would be much better.

Humans have a few ways in which we communicate – verbal, body language, facial expressions, etc… So, things can easily get confusing. Just ask any husband or boyfriend. 🙂

It is also interesting that many people will change their thought process or view of being with a horse depending on if they have tack on or not. I see people getting lazy, overconfident, and sometimes allow unsafe conditions because they think it’s ok now that they have tack on their horse. That’s not always the case.

How you treat your horse with or without tack shouldn’t make a difference. Being conscientious, safe, and thoughtful should always be the same whether or not there is tack involved. Your body language is still very important.

I also have seen people with good relationships with their horse on the ground lose that connection when they add tack and start riding. It’s because their thought process changes.

I see this with horses too. It’s not just us humans who change our thought processes. When they have tack on the horse can feel “caught” and they do whatever they are told because they feel that they have to. Then when that same horse has his halter taken off, yippee – he is off and running because now he feels “free” and he would rather not be there.

All these little things matter. Your body language, your intentions, and your thought process. 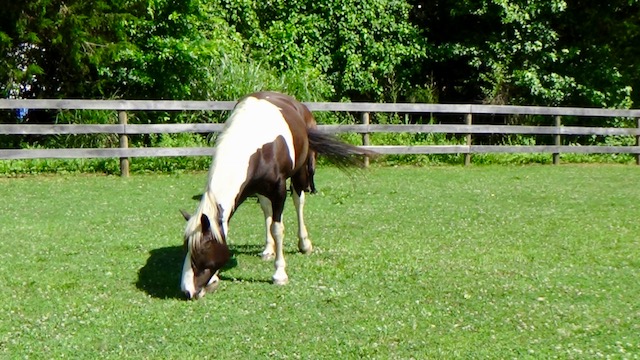 Here are some tips about those little things and how we should really pay attention to our body language at all times, with or without tack.

When you don’t have any tack on your horse and you are walking next to him, going somewhere together, you should be somewhere behind the front of his nose and either next to or in front of his front shoulder. I call this the “heart” area. It’s a great place to be to grow your heart connection with your horse. It’s also a place where you have to work together as it’s not one leading the other.

When you have a halter and lead rope on your horse and you are taking him somewhere, keep the same idea as if there was no tack. Stay next to him, walking with him, instead of using the tack to pull or move him. Stay in the “heart” area and work with your horse together just as if you didn’t have a halter and lead rope on. This will make a big difference.

2. Asking your horse to stop when he is coming up to you in the field

Horses normally go away from things going towards them and follow things moving away from them. So, when your horse is trotting or cantering up to you in the field and you want him to stop, step forward a few steps, put your hands up, and ask him with your voice to stop. Use whatever “verbal cue” you both are used to. Stop, Whoa, Halt, etc… This uses your verbal cue, your hand gesture cue, as well as including your body language. Make sure you give your cues with enough time to allow your horse to stop well in advance of coming too close.

When you want your horse to follow you, call him up and then gently start to move away from him and he will start to follow. Use a verbal cue of “come”, or whatever you both are used to plus a hand gesture asking him to follow you. By adding the stepping a few steps backward after you call him to you, you are now adding your body language to the mix and physically asking him to come with you.

3. Giving treats to your horse

When you give your horse a treat make sure that you give it to him, handing it to him just as you would give your hand to someone to shake. Your horse should have the treat at his mouth or a little below so he has to move his head in towards his neck or down. Not a lot though.

What you don’t want is for your horse to have to reach out and stretch his head out far in order to get the treat from you. Then in his eyes, he is taking it from you. Don’t be afraid to give a treat and don’t stand too far away when giving treats. It is a gift that you are giving your horse so, act like it is a kind, thoughtful present you are bringing to a friend.

I hope these little tips help. Start to watch your body language and that of your horse and you will begin to notice so much more. You will see how the little gestures really mean a lot to your horse. The nice thing is that not only will your communication get better, but your cues will become more precise and subtler.

Enjoy the journey and let me know how it goes and what you’ve seen.