I’m a firm believer in training without pain, pressure, or punishment. And MOST of my training is at liberty which means no tack either. If you want to read more about what training your horse at liberty means to me, you can visit this earlier blog…

But what about equipment?

Tack is a type of equipment, like a halter, saddle, bridle, bits, etc. But equipment also includes items like a reed, whip, crop, lead rope, lunge line, spurs, clicker, jumps, round pen, arena, and a patience pole. These are items that assist in the learning process and make the training process easier for both the horse and the trainer.

Equipment can often be seen as good or bad for a horse. It depends on the person, their experience, their intentions, and how the equipment is used. What’s most important to me is HOW they are used that makes them “good” or “bad”.

Anything can be used to provoke fear and anxiety in a horse if that is the intention. But a lot of the equipment we use, I feel should be used as an extension of our bodies and a helpful tool in training.

In this blog I want to address the “Patience Pole”.

The technical definition of this is a 12-foot-long pole designed with a hub and tether bar to allow a horse to freely move in a circle without becoming tangled. After being attached to this for a while, a horse is supposed to realize that no matter how much he moves, that he’s never going to go anywhere. Thereby, learning that he might as well stand still and relax. 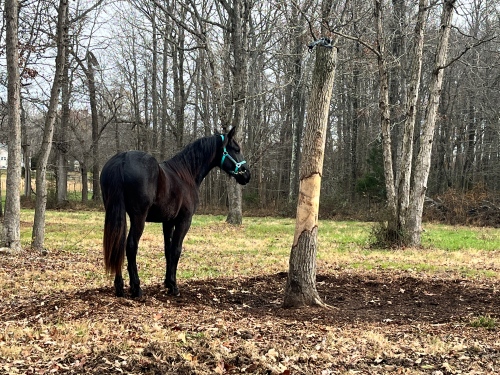 Mainly for two reasons. One is because I have seen people using this with their horses and for the most part it doesn’t turn out well. It could be that they don’t know how to use it properly or that the pole wasn’t designed and put together correctly.

I’ve personally heard from other horse owners about a few terrible accidents that have occurred where their horse got caught up in the chain causing one horse to strangle himself and another to break a leg. From the definition, it is supposed to be designed so this is not possible. But…who knows what actually went wrong.

I’ve also personally seen horses go nuts while being attached to the pole, scared to death. They would run around, kicking and bucking over and over until they were dripping with sweat and extremely anxious and stressed out. It was a terrible sight. One horse coliced that same night because of the stress.

The second reason that I have never used a patience pole in my training is that the process causes learned helplessness in the horse attached to it. According to the second part of that definition, it is actually designed to do this.

Learned helplessness is the behavior a horse exhibits after enduring repeated aversive stimuli beyond their control that leaves them feeling defeated, helpless, and hopeless. Basically breaking a horse’s spirit. This is the farthest from the ultimate desire I’m looking to achieve with my horses.

I want my horses to do something because they enjoy it and want to do it. I want them to always have a choice. It’s ok for them to say no. We will work it out.

I want my horses to always have that freedom and to be able to voice their opinion in the training process. It is a team effort, not a dictatorship. We do it together or we don’t do it at all.

Well, today while working with Merlin I was reminded about what one of my trainers, John Lyons, had told me years ago…

“Equipment is only effective if used in the right way with the right intention”. 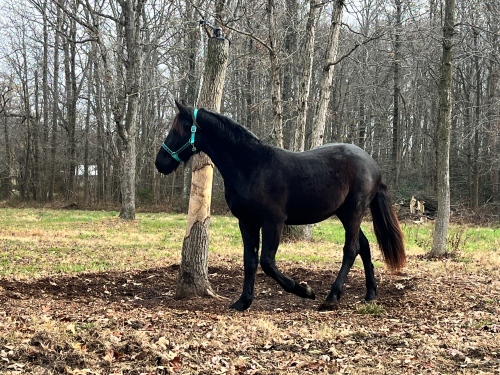 I was doing my normal routine with Merlin but for some reason, he was acting differently. He was a bit pushy, wasn’t listening, was a bit scattered, was not focused, and seemed very impatient. Even doing our normal stuff like hanging out in the pasture together and grooming. He was off.

It could have been a few things; being in the pasture by himself, just being gelded two weeks ago, the change in the weather, or me missing the last two days with him.

Not being able to pin down why and fix it, I just stayed calm and listened to whatever he wanted to say. He has always been so gentle and calm, but today he just couldn’t calm down and settle. Nothing really major, but I noticed the change. You could even feel a shift in his demeanor.

I tried all my usual solutions but to no avail. Sitting in the pasture with him while he grazed didn’t calm him down, he just pawed at the ground and switched his tail. Grooming him in the warm barn didn’t work, he kept looking around impatiently as if to say, “are you done yet”? And playing in the arena didn’t settle him down, he either ran from one spot to another or stood at the gate starring out. Hmmmmm. I had to think of something else.

I even took him to his favorite grassy spots around the farm, but that didn’t work either. He just kept taking a bite of grass and immediately moving on, then again, and again. Very unlike him. Again, nothing major but I knew he was off. He wasn’t acting scared or anxious, just impatient.

I needed something to bring him back to his normal self and try to help settle him down. Then I saw the patience pole and remembered the words of wisdom my trainer had told me above. We walked over and he didn’t seem to mind being close to it. Not that he wasn’t curious. So, I thought, “ok, let’s give it a try”. I know the principle and how to use it.

I attached the chain and stood right there with him for a bit scratching him and telling him I just wanted him to stand there for a bit. He was a little anxious but he also seemed reassured because I was there.

I pulled up a chair and sat about 15-20 feet away from him. That way he knew I was there and wasn’t leaving him with this new strange piece of equipment. It also made me feel better since I knew I would be right there if anything was to go wrong. I was a little anxious too.

Having him on the patience pole was also safer for me at the moment with him acting this way. When we were walking around grazing and I asked him to just stand for a while on the lead he got impatient and pulled me to the next spot. Plus he was pawing the grass and got close to my foot a few times. 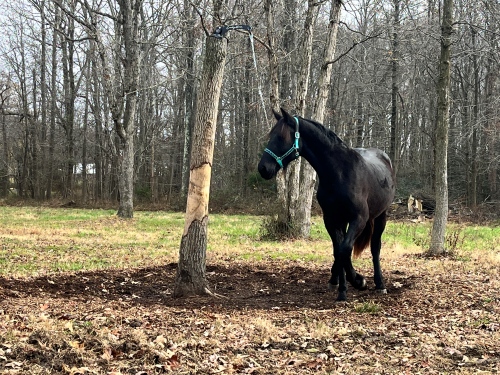 Well, Merlin stood there for a bit and then started to walk. The chain movement and clanking noise scared him at first and he backed up and pulled away. I quickly stood up and verbally reassured him and he stopped pulling. Then he stepped forward and he realized that he had control of how tight the chain was and you could see he felt better.

He didn’t pull away again and he stood there for a bit thinking about it. Then he walked around in a slow circle twice and then stopped and looked at me. We had a bit of a conversation about the whole thing and you could see that he was starting to relax.

I wasn’t taking away his freedom to choose, just asking him to stay on the line for a while. He still had control of which direction he wanted to go, how tight the pressure was, and when and where he stopped.

It didn’t take long for him to start settling down and he started watching what was going on around him. It was cute. He seemed to start watching the activity at the farm like it was a movie.

He watched one side, then after about 15 minutes, he turned around and started watching the other horses in the pastures. When he was done watching them, he turned to another perspective and watched the birds drinking water and the kids playing at the barn. You could see that he was actually enjoying himself.

I could not only see a difference in him but also feel it. This activity and piece of equipment really helped him. But I’m sure it would have been different if I had not been there sitting with him. Not only was I protecting him, but I was also providing him with reassurance and company. I was learning to be patient myself.

It was a lesson that we both were doing together and experiencing together.

My thoughts on the patience pole have definitely changed. I see how, when used with good intentions and in a positive light to your horse (something you do with your horse), it can be a good training tool. It was an experience and an experiment that had good results today.

When I took him off the pole and we walked around the farm a second time, he was his normal calm, quiet, relaxed self. It was comforting to see the difference.

So, the next time you look at a piece of equipment as a ‘bad thing’, try seeing it from a different perspective if used in your hands with good intentions and in a positive way. Maybe it will help and maybe not. But it’s worth a second look.

Just something to ponder and think about in your lifelong journey with horses.

Here 50 some years after I started my life with horses, I’m happy to have been able to change my perspective on a specific piece of equipment from bad to good. I am always eager to learn new ways to train and evolve with horses.

No matter how old you are or how long you’ve been with horses, there is always something more to learn. Being open and enjoying the lifelong process and adventures with horses has been a blessing in my life.