The power of encouragement

This is Mark again with another of my rare appearances on Teddie’s blog.

Teddie encouraged me to write this after I was telling her about the 2 new cats we have just acquired.

She said that although it concerned cats and not horses, the same lessons apply, so here goes…

Back in August last year, we had to have our beloved cat put down. It was an extremely sad time for me and my partner Elke and took us several months of mourning before we could face the prospect of having other cats in the house.

But come the New Year, we felt we were ready and as luck would have it, a guy from our gym was looking for a home for 2 cats he had previously rescued.

He already had 1 cat but the 3 of them did not get along together and try as he might to make it work there was always tension in the house. So reluctantly he had to seek a new home for them and we volunteered.

So on the second weekend of January, he duly delivered Mickey and Tyra to us.

Mickey is Tyra’s son although you would never guess looking at them, he’s twice the size of her!

They are both very loving and good-hearted creatures (which animals aren’t?) and it took us no time at all to fall in love with them.

However, one particular issue arose within a very short space of time…

Because of the ongoing tension in their previous home, the guy from the gym made sure they all eat separately from each other by putting one food bowl on the table, one on the floor and one outside.

Which meant that both cats were used to jumping on the table.

But we had always made it a rule with our previous cat that the table and the kitchen worktops were off-limits and we weren’t prepared to change this just because they’d previously been allowed.

So we started off by just putting their food bowls on the floor thinking they wouldn’t feel the need to jump on the table, especially as there was no longer any stress about where they ate.

They were both jumping on the table for fun and to get a different perspective on their new home.

So, the next step was to politely lift them off the table and place them on the floor each time they jumped up.

But that didn’t seem like much of a deterrent and so it proved.

We tried pointing and saying “down” but they just stared at us in amusement.

At which point I told Elke that we had to bring out the big guns.

She protested but I said it was the only way they’d learn.

So here it is: 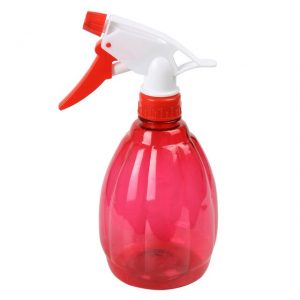 To set your mind at rest, I did use it on fine spray mode and can confirm that no animals were injured in the making of this email.

Anyway, the first few times I used it I had to laugh as they were both totally dumbfounded by it.

They stood there staring at me trying to figure out what had just happened.

Another fine mist later though and they decided they weren’t going to hang around to find out and promptly sprung down from the table.

The next few times, they tried to weather it out by closing their eyes when they saw me approaching with the bottle but after a few sprays, discretion became the part of valour and they retreated once more.

I then realised that I couldn’t be walking around with the water bottle the whole time or leaving it permanently on the worktop, which meant coming up with the following variation.

The next time they jumped on the table, I approached with the water bottle in one hand and said “down” while pointing to the floor with the other hand.

Again, I had to use the spray initially but after a short while just the sight of me approaching with the bottle, pointing and saying “down” were enough to remove them from the line of fire.

After conditioning them with this combination for a while, the next logical step was to remove the water bottle entirely and just rely on my voice and pointing and this has proved to be very successful indeed.

They are not fully ‘cured’ yet but we are not far off. It might require bringing back the water bottle now and then but we are nearly there.

A couple of points to note:

1) I didn’t chase them to the floor with the spray, it was only ever used at table height so that they associated the table only with that annoying fine rain.
2) I immediately followed this up by putting the water bottle down and then giving them a stroke, some gentle words of praise and the occasional cat treat.

And as we were going through this training period I couldn’t help but think of Teddie and what she teaches about negative encouragement, which comes from the concept of negative reinforcement in behavioral psychology.

In negative reinforcement, a response or behavior is strengthened by stopping, removing, or avoiding a negative outcome or aversive stimulus. In our case, stopping the spray when they jumped down thus rewarding their behaviour.

This was then followed by some positive encouragement (aka reinforcement) to further reward them and encourage the desired behaviour. 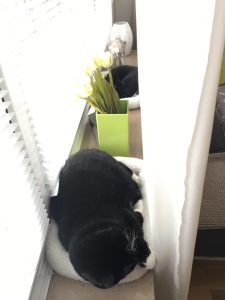 Which is why when I mentioned the story to Teddie and the connection I made to her teaching, she said I must share it with you.

She said people could use it as a model for dealing with their horse’s unwanted behaviour.

Maybe I’ve picked up a few things about training after all this time working with her.

Which is to say, if I can then you’ll have no problem.

So my advice would be to keep reading her newsletters and watching her videos, there’s so many valuable lessons in them to learn.

Before I go, a quick footnote to the story above.

Having pretty much dealt with the table issue, the 2 of then have now started jumping on the worktop.

And interestingly the voice and hand gestures don’t seem to work, as if they only associate them with the table.

Something for you to think about.

And in the meantime…

I hope you have enjoyed today’s email and I’d love to read your Comments below.