They are Still Out There! (Part I)

In the past decade I have seen a trend rising of people treating their horses with more care and concern. With people looking into ways to naturally work with their horse and see the world from their horse’s perspective.

There are more people talking about this, sharing their ideas, and even more people building long-lasting friendships with their horses. It has been a blessing to not only see this rising trend, but to be a part of it.

However, there are still people out there who feel horses are objects, possessions, or things to use for their own selfish reasons. And when I come across one, thankfully it is more of an anomaly than the norm.

But, they are still out there.

In last week’s blog I mentioned that I was negotiating a deal to purchase Kit. The beautiful black Arabian stallion I trained for a year. He is one of the stars of my Stallion Series Program.

Well, I went out to the boarding facility that he was moved to and was absolutely shocked at what I saw. It had been 10 weeks since Kit had been moved to this location. Here is a picture of what Kit looked like before he was moved… 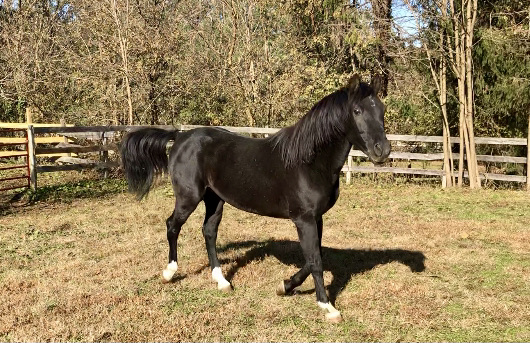 And this is the Kit that I saw this weekend…10 weeks later. 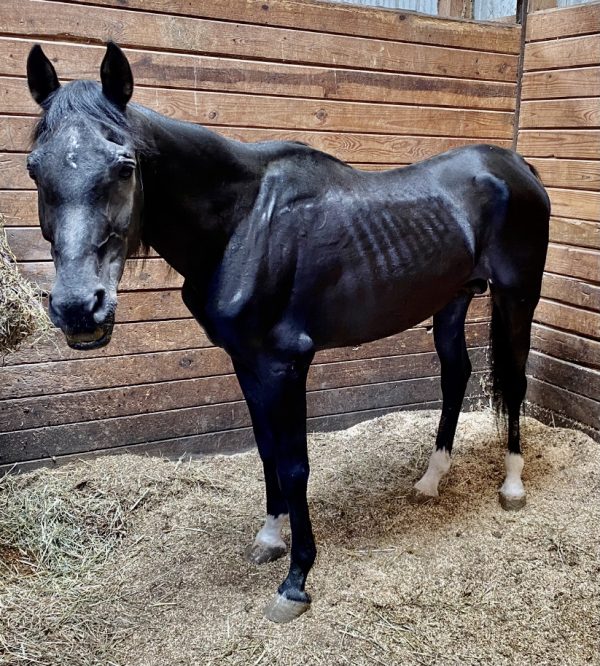 I couldn’t believe it.

When the owner of the boarding facility saw my reaction she said, “He looks a lot better than he did. He didn’t eat for the first 6 weeks he was here.” So this picture was Kit after he had been supposedly eating again for 4 whole weeks. Can you imagine what he looked like four weeks ago?!

Not only was Kit’s skin different shades of grey, but his eye sockets were extremely sunken which says he had been emaciated. You could not only see all the bones and points on his shoulders and rump, but you could see his entire rib cage very distinctly. His eyes were very weak and sad and his face had turned mostly white. He obviously had been through a war and his body was showing the signs.

She also said, “If he hadn’t been in such good shape when he came here, he would have starved to death. And it’s not my fault. If the horse doesn’t want to eat what I give him, he can starve.”

OMG! She didn’t just blame the horse for starving himself did she? Wow.

I asked her if she gave Kit the feed that the owner provided her when he first came. She said, “No. I only feed the best grain money can buy and all the horses learn to eat it or they don’t. Their choice.”

Again, I was shocked. How could she knowingly and purposely watch a horse starve? 6 weeks of not eating (that she admitted to).

I couldn’t hold my tongue and I said, “You’re the owner of this facility. You’re being paid to take care of this horse. How could you not feed this horse for six weeks?!” She could see my anger and disgust for what she had done.

Proudly, she said, “I didn’t starve this horse, he did it to himself”! Sorry but, what the hell?! Seriously?

Then she started to backtrack and cover herself. She told me that she had tried all different types of feed, grain, and hay and that he refused all of it. I asked her why she didn’t just feed Kit the feed he was used to and that was sent with him when he arrived. Kit’s owner had sent three bags of grain with him on day one.

This lady said she didn’t feel like feeding him “that crap”. Obviously, she had no concern for the horse or his welfare as he was in great shape when he got there and that was from eating “that crap”, as she called it. And trust me, it was actually good stuff.

Any horse person worth his weight in gold, especially one who runs a boarding facility, knows that you don’t just change a horse’s food supply cold turkey. If there needs to be a change, you ease them into it by slowly mixing foods and shifting them into a new feed if at all possible. And she had the ability to do that since the owner had sent three bags of his feed with him.

You watch a horse closely on a new feed to make sure they don’t get diarrhea and get dehydrated or have an allergic reaction to it. You also have to watch and see if they gain or lose weight on the new feed to be able to adjust the amount. Plus some horses can’t digest certain grains and aren’t used to grain at all. Then you get into what is best for the horse depending on his age and health issues.

Changing food cold turkey can hurt their digestive system, cause intestinal distress and even cause a horse to colic. What makes this worse is that this lady had no idea of Kit’s background, no idea if he had any health issues or food allergies, and she still changed his food supply based on what she wanted, not the horse.

Then she dropped a bombshell.

Including what finally pushed me over the edge to lose my temper with her!