They are Still Out There! (Part II)

Then she dropped a bombshell.

I was so shocked at her arrogance and her lack of concern for Kit, much less a horse she was being paid to take care of, that I was dumbfounded and silent. And in that silence, she kept talking.

She said that not only did he “starve himself” but that, “He was the most troublesome and problematic horse she has ever dealt with in her 30 years as a professional horse trainer.”

I got such a sick feeling in my stomach on that sentence. She obviously really disliked Kit and was seemingly acting on her anger. She seemed to show no concern for his welfare whatsoever.

Everything out of this woman’s mouth since I had walked onto the property had been nasty, mean, and in anger. She was either having one hell of a bad day, or she was just a mean person. I wasn’t sure which, as this was the first time I had ever met her.

Kit’s owner had called her and told her I was coming out to visit with him and that I had her permission to handle him and take him out. She told her that my horse had just passed away and I needed the company of another horse to help ease my heart. That’s all she knew about me and she was nowhere near sympathetic. She was actually combative. 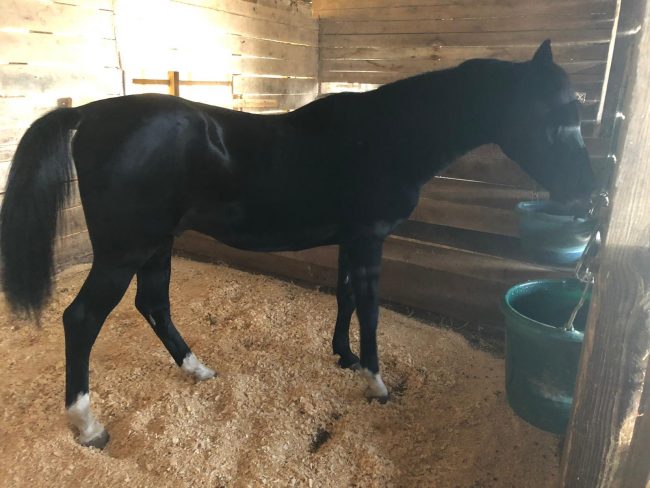 I asked her why I couldn’t bring in my own hay, that I knew Kit enjoyed and ate, at no cost to her in order to get Kit eating again. She again said that she only fed the horses the same thing and if they didn’t eat it, it was their choice. Again, no concern for what the horse needed.

At that point, I just lost it and it was not a pretty sight or sound. Finally she agreed to allow me to bring hay into Kit but she still said he wouldn’t eat it and I’d be wasting my money. She kept telling me how wrong I was. Not that she had another choice or plan of action for him.

And she kept ranting. She went on to tell me that she gave Kit calming meds, grief meds, anti-anxiety meds, and even sedatives because he was too much for her to handle during the first six weeks. I couldn’t believe it. She gave him medications, mixed them up, and even gave him shots without knowing his health background or any of his history.

Another big no no.

I was only there for 4 hours the first day and what I heard from this lady and one of her helpers proved to me, beyond a shadow of a doubt, that she was stuck in the past. She was not only not up on any updated training methods, but she had no empathy for horses, and was full of old school knowledge that emphasised force and punishment.

Horsemanship has come a long way since 1970 and even 1980. You just don’t tie a horse to a tree so they can’t move and then leave them there unattended overnight to teach them a lesson without any food or water. Yes, I was told she did this. And when they told me, they said it as if this was exactly what you are supposed to do when a horse gives you trouble. It was one of her students who saw her do this and told me.

This is what this lady had taught her student to do. This student is about 21 years old. And she told me this as if she was proud of learning this little training technique. She had no idea that “being the boss” and “beating a horse into submission” isn’t the only way anymore. Nor is it the best way.

The next thing I thought, and you are probably thinking this too…

This lady must have discussed all these issues with Kit’s owner in order to come up with a plan of action that was best for the horse. The horse doesn’t eat for six weeks, is starving to death, and she’s giving him lots of self-diagnosed medications. You would think that she had to tell the owner what was going on with their horse. Right?

I left the boarding facility in fear for Kit’s life and in disgust of this woman’s arrogance and lack of updated horsemanship knowledge. I had to get the other side of the story and find out what Kit’s owner knew about the situation. I was hoping there was a story I had not heard and it would make the situation look better than what I had seen on day one.

Well, I called Kit’s owner immediately after leaving the property and asked her what the lady had told her about Kit’s condition. She knew NOTHING. She said that she had talked to this lady every day for the first two weeks and then 3 times a week after that and that this lady kept telling her, “everything is great. Kit is doing well.” She lied to her.

Kit’s owner has become disabled and can no longer leave her home to visit Kit. So she is depending on this lady at the new boarding facility to take care of him. This lady knows this about Kit’s owner and she is paying her for full-care board.

Kit’s owner told me that she had been told that Kit gets turned out in a pasture every day for exercise, that he is in a barn stall every night, and he is fed twice daily, watered, and the stall is cleaned daily. Full-care also included a full bed of shavings, grooming, and blanketing when needed. But from what I saw the first week, this was not what was happening.

Kit’s owner was furious when she heard that he was in such bad shape and that she had never been told. This lady had never asked about his background, his health issues, or anything. All she knew was that he was a stallion that needed full care as his owner was disabled.

What I’ve seen and heard in the last 4 days is that Kit is in a barn with 10 other horses, one stallion directly across from him, 5 geldings, and three mares (plus one foal that was just born). All the horses except Kit get let out in the pastures twice a week. They are all stuck in a barn stall the other five days of the week. Kit is supposedly taken out 3 times a week for an hour a day and left in the field.

A very kind, sweet young lady, that I met, tries to take him out on Monday, Wednesday, and Friday when she is there to help out. Fortunately, for her, Kit likes her and is gentle with her knowing that she has a good heart. But she is about 19 years old, she has never had a horse, and she has never been around horses before she started taking riding lessons with this lady last summer. And during these lessons she has fallen off three times and the third time hit her head causing a concussion. She has no experience whatsoever with horses.

But since this lady can’t deal with Kit and they dislike each other so much, she is allowing a complete novice to take a stallion out to the pasture. That is just criminal in my book. She is putting this little girl’s life in jeopardy since she doesn’t want to handle him herself. 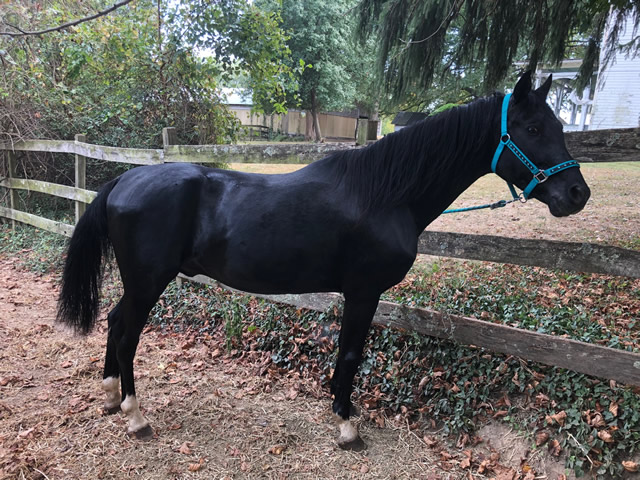 What if she walks him by the mares in heat? She doesn’t know what to do, or not to do, to keep herself safe around a stallion. Kit has been a breeder and remembers how that works. What if she walks him out while they are breeding the other stallion? What if???? Stallions are very different from Geldings in many ways.

I asked her if she knew that he was a stallion and she said, “yes, but how is that different from other horses?” Wow. Not her fault – it’s her trainers fault. This sweet girl also told me that she loved Kit and thought he was so beautiful when they brought him in. He was her dream horse.

So here’s my mental picture so far…

So in summary, Kit goes to a new place, is missing his buddy Danny (he passed right before he was moved), has another stallion who is breeding right in front of him all the time, three mares in and out of heat very close to him, being thrown a new type of hay that he doesn’t like, given new grain that he’s never had and doesn’t like, being stuck with needles and given medications that are doing who knows what, missing his owner and his trainer (me), and having to deal with lots of kids and other strangers running around causing havoc.