Think before you Train

I’ve talked about my farrier, Scott, in an earlier blog. He is a very nice man who tries his best with horses and has handled my horses really well. He’s even worked well with how I’ve been easing Danny into getting his feet done.

We have had quite a few interesting conversations while he was working on my horses. I’ve come to find out that he is older than I am and that he comes from the same “old school” training that I grew up with. So, we have similar stories growing up with horses.

The difference is that my path with horses went down the way of learning as much as I could and continuing my education with clinics, scientific research, training, and more training. And I was always looking for a gentler, softer, more connected way with horses.

My farrier did hit a time in his life that he wanted to learn the latest craze and he started with “Natural Horsemanship”. He liked that it was kinder than what he had learned growing up and that his horses responded well to it. But that is where his learning stopped.

Our conversations have gone over a variety of topics, but when they came around to “training” horses, we definitely have “agreed to disagree”. However, he admitted to usually falling back to the “old school” ways. He feels that people should “control” their horses and that if their horse doesn’t do what they ask, then they need to force their horse into submission to get it done.

As an example of one of our discussions – 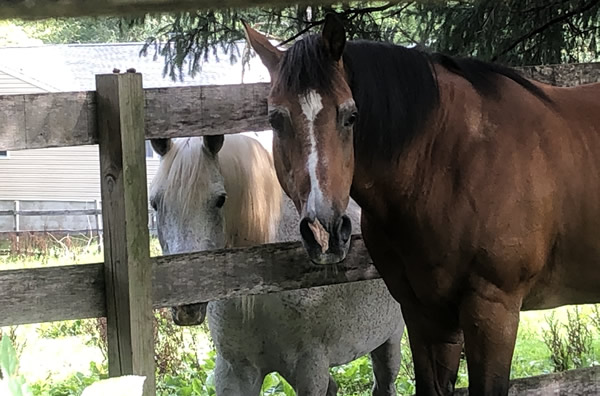 When it came to our discussion about socializing my new horse, Danny Boy, he said that I should just put Danny in with another horse and let them work it out themselves. And if they get hurt, they get hurt, but after they work it out “naturally’, it will all be fine.

Well, that is not what I did!

He also said, NEVER put him with another stallion because that will NEVER work.

And that is just what I did do!

But not because I was doing the exact opposite of what he said he would do, but because of my knowledge and experience with horses and my training approach.

And let me say, the socialization of Danny Boy is going very well. When I first was asked to train Danny, he was a very unsociable, extremely opinionated, and was a very high-strung, excitable stallion.

Danny Boy is a beautiful grey Arabian stallion that had been ignored, abandoned, and isolated from other horses for years because of his bad temperament. But when I first met him, his eyes said it all.

He just looked at me from a distance and said, “Please come play with me”. And my heart was “all in”!

That started a 21-session lesson plan that took him from “unmanageable” to “sweet and socialized”.

All this is documented in my Stallion Series program along with the journey of another beautiful Arabian Stallion named Kit. Danny is now best friends with Kit and can be turned out next to each other and stalled next to each other.

It may have taken me 21 days over my farrier’s one day solution, but it all went smoothly and flowed easily.

Last week my farrier decided to socialize his gelding with another gelding by just putting them together in the same pasture and letting them work it out.

Well, guess what happened? They started to fight. The other gelding was more aggressive and was protecting his territory. His horse started running, trying to get away from the aggressive horse, and was running full speed towards his owner, the farrier.

Scott was on the outside of the fence watching as all of this was going on but didn’t have a back-up plan or an escape route for his horse. So, he just watched as his horse panicked as he was being attacked and chased by the other horse.

His horse was still running full force when he realized that there was nowhere for him to go except over, or into, the fence. And sure enough, his horse jumped the fence and he saw it coming but didn’t move out of the way.

Unfortunately, his horse landed on him and he is now in the hospital with 15 broken bones, cuts, and bruises. He broke both arms, both legs and will be in traction for at least two months.

Luckily, he will be ok, and he didn’t have any terribly serious injuries that can’t heal and no major damage to his internal organs. He told me himself after the accident that he saw it coming and he just froze.

He also realized when he saw his horse being attacked that he probably shouldn’t have just thrown them in together like he did. But he felt that the “natural” way would work and that the two horses would just get along.

And yes, his horse is ok with a few injuries from bites and kicks on him. However, I’m sure he is traumatized and has a few fear memories to deal with now as well.

If you’re going to try to socialize your horse with another, here is my training plan so that it might help you or give you some suggestions for your own plan.

Now that Apollo is alone in his pasture due to the recent loss of his father, Jazz, I have been working on socializing Apollo with Danny Boy. 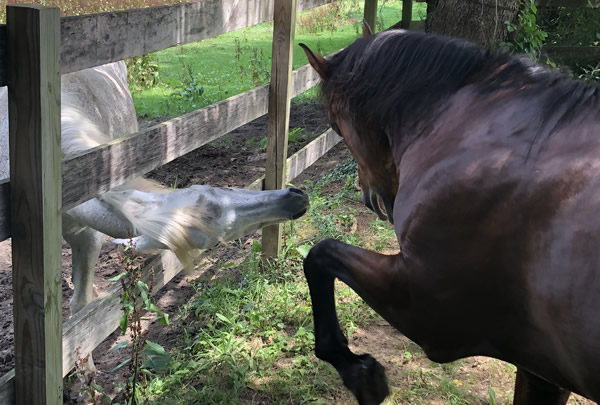 Here is how my training plan is going:

I’ll keep you all updated on how it works out.

Remember to think about your training before you start. It’s kind of like the old saying – “Look before you Leap”. Try to think about all the things that could happen and try to prepare for the unexpected. If it happens, then you’re ready for it. If it doesn’t happen, all the better!

Think about the purpose of what you are trying to achieve, have a plan of action, have a back-up or an escape plan, and be safe! Always think of your safety as well as your horse’s safety.

I’d love to hear your thoughts in the Comments below.