This week I want to have some fun. Balance, you know.

Your horse needs to have some play time to balance out training and so do you. So, here is something to have fun with.

A whorl is a patch of hair growing in the opposite direction of the surrounding hair, usually in a pinwheel fashion. It is commonly found on a horse’s face or head.

Supposedly, all horse’s whorls are distinctive, like a person’s fingerprint. Recording a horse’s whorl location and personality character is actually one of the oldest forms of identifying a horse. This was used specifically for horses without white markings on their face. 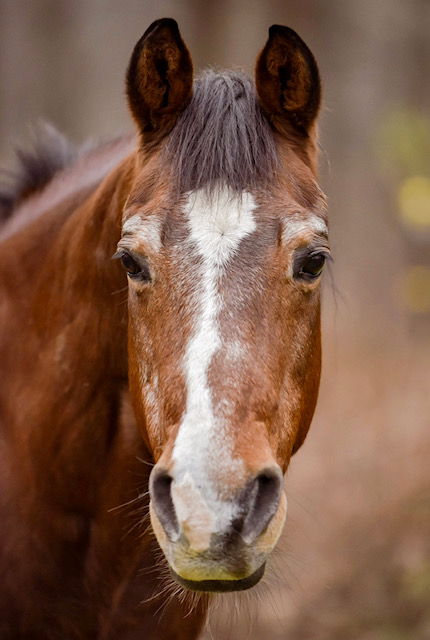 According to the Bedouins in Arabia, European gypsies, and even some of the old-time horsemen of the 1940’s and 50’s, there is a definite link between a horse’s whorl and his temperament.

They used the type, number, and placement of a horse’s whorl as a way to predict the behavior tendencies of a horse. This was used when looking for a good well-mannered, easy to train horse or when selling a young horse.

Now a days it is looked at more like a magic trick than real science. However, there is real science behind it?

As it turns out, scientifically, the whorl patterns form in the development fetus at the same time the brain is forming. Wow, pretty cool.

The nervous system and the skin, which contains the whorl patterns, come from the same embryonic layer. So science can correlate the formation of the brain and a horse’s temperament with the patterns that show up on the skin.

This seems to explain the apparent relationships between body traits and temperament. So it’s not all smoke and mirrors.

Author and educator Linda Tellington-Jones did research on this theory in the 60’s, 70’s, and 80’s. She was interested in using whorls to evaluate a horse’s disposition.

Because of her books this theory and use of the whorls became more popular in the 90’s. She got very specific in her book, “Getting in Touch: Understand and Influence your Horse’s Personality” with how each type of swirl and position of it related to a specific personality trait.

But here is a general breakdown of the swirl patterns and their relationship to the horse’s personality traits, according to Linda. 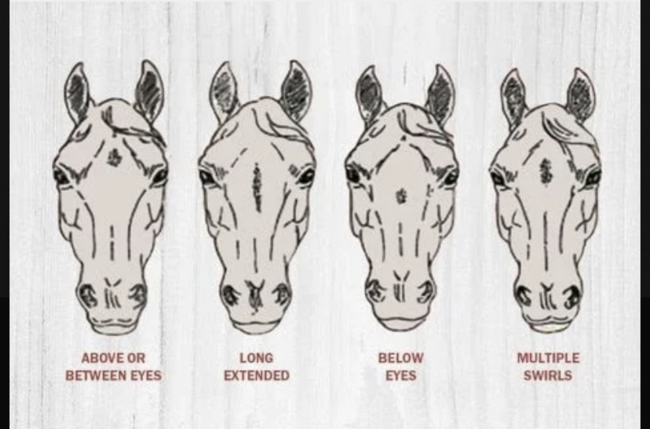 Linda Tellington-Jones felt that the best way to use this predictive tool was in discovering how best to approach a particular horse’s training.

“If a horse’s swirls tell you he’s the more temperamental type, then you know not to get after him for ‘attitude’, as that will just upset him more”, she says. Also, “many of my top horses had two swirls. Nowadays we have so many more ways to deal with such horses – to teach them to think instead of react.”

Doug Carpenter, a performance horseman, also puts a lot of stock in this theory. He admits to picking many winners using this theory when he evaluates prospects. He says, “I started looking at them (whorl patterns) years ago out of curiosity, then narrowed it down to a system that works for me.”

He ideal combination – in terms of indicating the likelihood of a willing, trainable prospect – is one swirl centered on the forehead between the eyes, and two matching swirls on either side of the bridle path. But the two swirls on the bridle path cannot extend beyond the length of the ears when they are folded back.

He also feels that a single swirl centered below the level of the eyes is a positive indication, and the two swirls close together can be ok, but not in every case. “It’s not 100%, but it’s close”, he says. So they’re not necessarily a make-or-break proposition.

By contrast, he feels that a horse with two or more swirls that are relatively spread apart on the face is something to be concerned about. But he doesn’t use this theory as a tell-all answer. He adds other things as well in his decision when looking at prospective horses.

So, if he really likes a horse but his whorls don’t match what he wants, he may chance it. But if a horse is already questionable, the whorls don’t look good, and he hasn’t connected with the horse, then it’s a definite no.

Even the scientist Temple Grandin, PhD did studies on whorl patterns. However, she studied this theory in cows first. But she did find a direct correlation with horses as well. 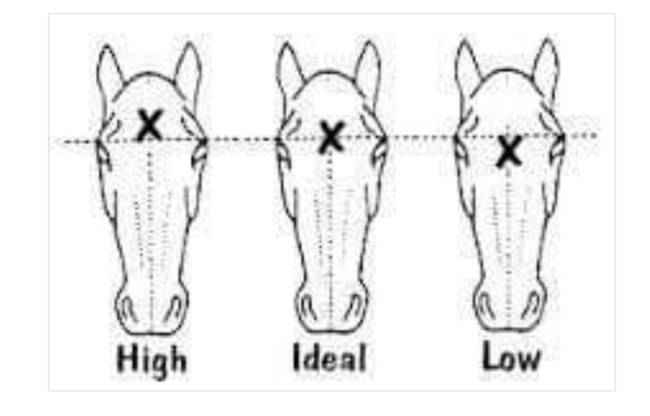 Temple Grandin says, “I’m not a fan of rough training methods in general, but if you use them on a high-whorl individual, you’ll probably traumatize and wreck the animal”. She agreed with Linda Tellington-Jones that this theory is important in the guide to training a horse.

But not everyone buys into this swirl theory.

“It’s not outside the realm of possibility that there’s a relationship here,” he says, noting again the similar embryonic origins of skin/hair and the brain. “That said, it appears to be ‘loose’ enough that while it might be broadly predictable, the fine details in individual variation overwhelm it in many cases.”

“So, due to individual variation, it ‘works’ some of the time but not all of the time.”

But what have you noticed?

Just for laughs and giggles…

Here are some more general ideas about what the whorl means. Check them out and then check out if your horse has one and let me know if they match. 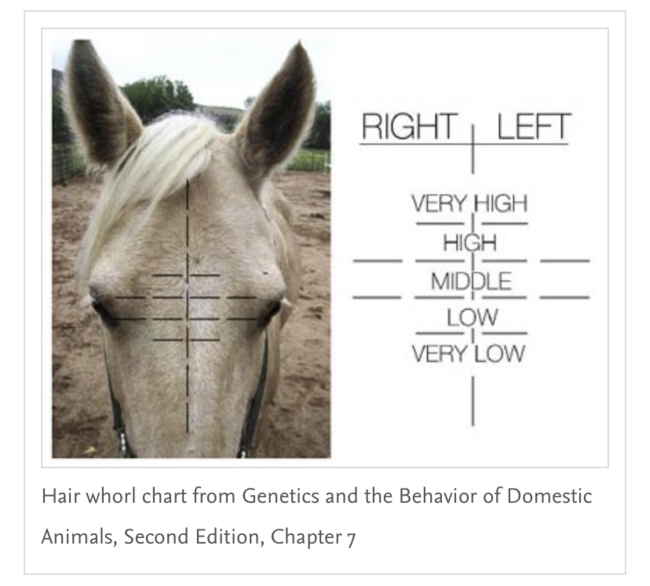 And I can tell you from watching the whorl patterns in my horses, these definitely describe the temperaments in my horses when I first got them. However, with the proper love and training the ones who had the double whorls and were dangerous, all settled down and became loving, well-mannered horses for me.