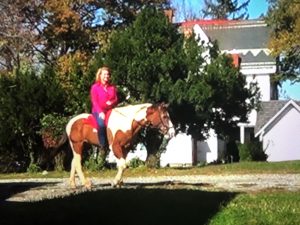 I love trail riding especially when I used to ride my oldest horse Jazz as we always seemed to end up having a fun adventure of some sort.

One day we were on a group ride in some mountains we’d not explored before, when Jazz heard some rustling in the bushes close by to the path we were on.

The group was moving slowly so I allowed him to wander over and investigate as my Jazz is really very curious.

We were only just slightly off the trail, and the group was close by, and everything was very relaxed until the rustler revealed himself to be…

He let out a bit of a hiss and a growl to let us know he wasn’t too happy about his afternoon being disturbed.

As you can imagine, this sent shock waves through the group, which resulted in all of the horses freaking out and running off down the path! 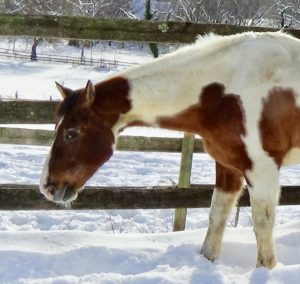 Who wanted to play cat and mouse, except it was the mouse chasing the cat!

He pinned his ears, snorted, showed his teeth, pawed the ground as if to warn the lion and then crouched forward and down in full attack mode.

I could almost read the expression on the lion’s face who seemed to be saying, “What the heck…?!”

And at this, he turned around and made a run for it with Jazz following in hot pursuit. My cutting horse was on the hunt!

I did my best to try and stop him but with the smell of feline in his nostrils he was not to be denied.

I wasn’t going to bail on him either.  So, I just held on for dear life and let him do what he felt he had to do.

But this only served to spur him more and the next thing I knew we’d left the woods and were flying across an open field faster than I thought possible heading for the next set of woods.

I had no idea how this was going to end up or what I would do if the lion decided to turn and face us but I also knew to trust my horse as he had trusted me so many times before so I calmed down and just went with it.

We galloped into the woods with Jazz not far behind the lion but he was much quicker through the trees than us and before long had lost us.

Jazz slowed down and eventually came to a stop. He looked around for a few moments and then proudly straightened up, puffed out his chest and pranced around like Donkey when he became the white stallion in the the Shrek movie.

Of course, we were then left with the slight problem of how to find the rest of our group as the chase had been quite a long one.

But Jazz had the answer to that too as it seemed like he could either smell or hear them and so for the second time that day I let him have the reigns and he lead us back.

Remember, neither of us had been in these mountains before but he took us right back to the trail where the group had just started searching for us.

“What happened to you??” they said.

“Oh, you know, just a spot of big game hunting… but fortunately he got away!”

We all laughed a sigh of relief and to this day I could swear Jazz had a frown on his face.

So what are the conclusions and lessons you and I can draw from this story?

You could argue that if I hadn’t let Jazz go and investigate that bush then the mountain lion wouldn’t have been disturbed and we’d all have just carried on in peace.

Yes, that’s true but if we are to have a partnership with our horses, then we do need to allow them to be themselves and express themselves.

It’s a bit like having a teenager under your roof, at some point they are going to want to go out in the evenings without you. You’d rather they stayed home safe and sound but to deny them would not be good for your long-term relationship together. 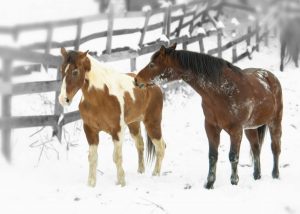 I do allow my horses to have a voice but ultimately I set the rules and the boundaries.

How often have you heard the story of where a family breaks up and the kids live between the 2 parents, where 1 of the parents is very easy-going and the other has stricter house rules?

And how often do you hear of the kids actually feeling more comfortable being with the parent who has the house rules?

I see it the same with horses. When they know where the boundaries lie then the chances of misunderstandings and miscommunication are far less.

And ultimately all of this leads to trust because you know you can depend on each other.

This is then the point I like to get to with my students because once you have trust between you and your horse, everything can be built on that – connection, cooperation and yes, even love.

I hope you enjoyed today’s story and please, please do write to me, I love receiving your comments and replies.