When to Push and When Not to…

This week a student and I had an interesting conversation about when it’s ok to ask more from your horse, how to know when to ask, and when to stop asking.

It was kind of like the age-old question of what came first… the chicken or the egg?

I’ve seen both sides of the coin here. Some people are to the far right and say, “you need to control your horse at all times, and he should do what you want, when you want.” That also, usually, includes adding punishment every time the horse doesn’t do what you want.

Then there is the far left that says, “let your horse do what he wants, and he will be your friend.” That usually includes no punishment and no consequences to the horse when he doesn’t do what you want when you want it.

Both of these sides seem extreme to me and very “black and white”. However, in my personal life and in my experience with horses I’ve seen transformations happen in the “grey area”. The compromises.

The “grey areas” allow for a margin of error and the individual variances since everyone and every horse is not the same. Every single person, and every horse, have their own individual life experiences that form their personalities.

A horse that has raced all his life and is now retired is going to have his own perspective and reactions when his new owner tries to teach him how to be a good trail horse. Even though this same owner purchased a well-trained trail horse 5 years ago and has been riding for the last 10 years, this retired racehorse is going to act totally different.

I think most of us have seen this and gone through something similar with different horses throughout our lifetime. But…when you’re in that “grey area” and you’re trying to help your horse through a new situation, training a new trick, or working through a problem… 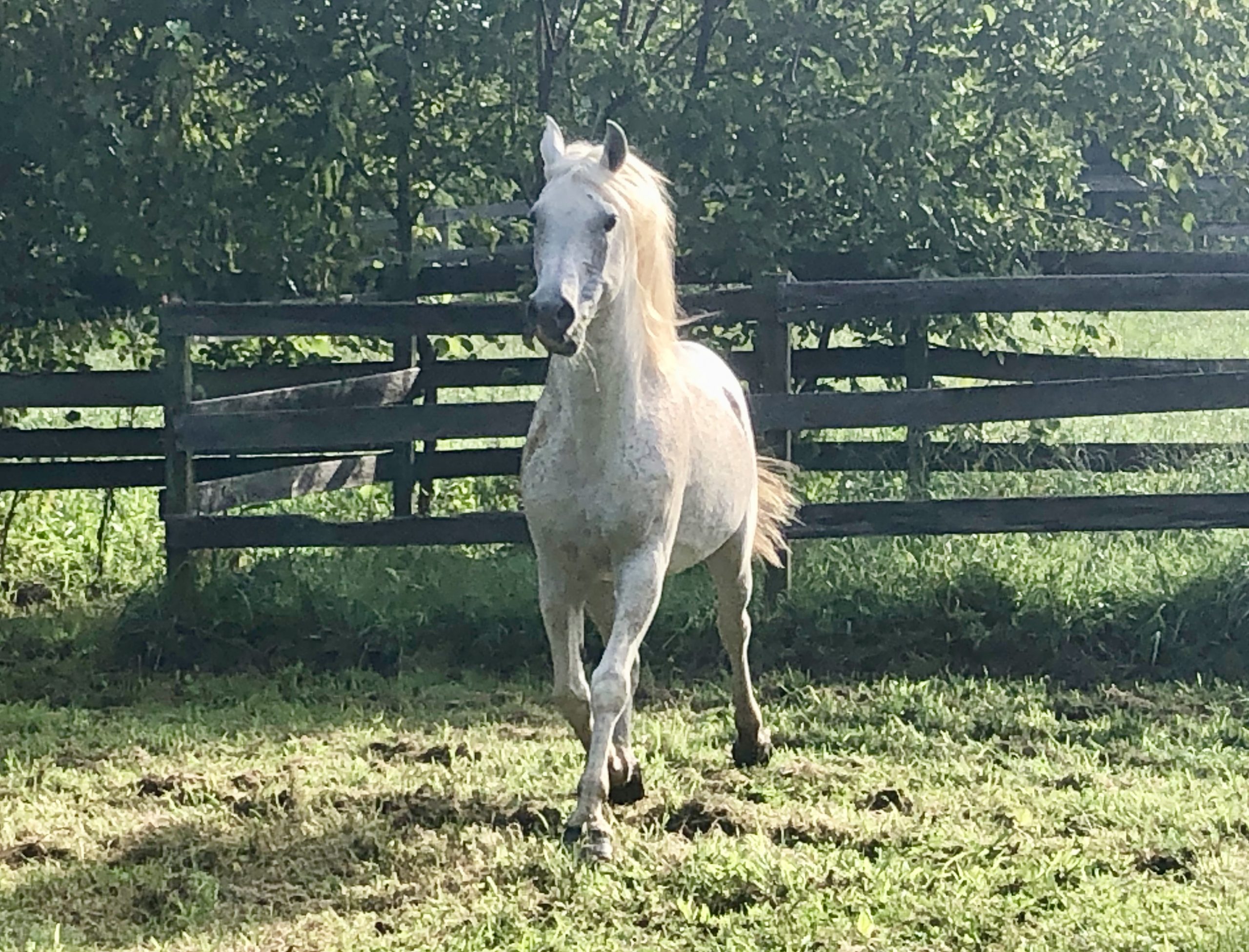 When do you push your horse to keep going and when do you not push?

Let me give you an example that happened to me this week that will help explain what I mean.

As you read in last week’s blog, I have gone through a lot of physical and emotional trauma in my lifetime and because of those experiences I react differently in certain situations. Of course, I never know when one of those triggers is going to show up. So, I live my life as normal as possible until something changes.

Well, I had a good friend over to the house and we were playing pool and having fun. He knows me pretty well and knows about some of the traumas that I’ve been through. But it’s not anything we really talk about or even think about when we are hanging out.

Everything was going well, and we were laughing about me beating him in pool and he came over and started pretending he was a bear… loudly growling, raised his arms and pretending to attack me. He brought his arms down over my head and around my shoulders, pulled me close, pushed me against the pool table, tightened his grip, and then squeezed harder..

The second he came over acting like a bear with his hands in the air and loudly growling, my trauma memory was triggered, and I backed away and said “don’t, don’t, don’t” and my head went down, and I started to cower.

Even though logically I trusted this friend, my instincts took over. Because of past traumas, my fear went from 0 to 100 very quickly. I now felt trapped and scared. And as he squeezed me and picked me up off the floor I was now immobilized, and I freaked out! I was in full “fight or flight” mode and terrorized.

I started yelling, “stop, stop, stop!” and moving and struggling even harder. He must have thought it was funny as he squeezed harder when I started to fight. That was the wrong thing to do.

I couldn’t think of anything else but trying to escape. I screamed even louder and fought back harder until I got loose and turned around and gave him a piece of my mind! I was furious and terrorized at the same time.

When I got free, I also realized that my body was shaking so much that I could hardly keep myself upright, talk, or even think straight. And even though I was angry, I couldn’t stop crying. I had to sit down and try to calm down as it felt like my insides were shaking as well. I was a nervous mess. My mind knew he was a friend, but my instincts said otherwise.

The bottom line is that he “pushed when he shouldn’t have.” And then he continued to push, forcing the situation to spiral out of control.

He didn’t listen to me saying, “don’t” and “stop” verbally and didn’t notice my body language telling him to stop. If he had stopped when I asked it would have calmed me down and the situation wouldn’t have spiralled.

My body shook for the next hour and it messed up my whole day. It short circuited my brain for a little while. The past trauma was re-lived in my body – muscle memory – and in my emotions – fear memories.

An example of this would be when you are out riding trails and your horse stops and decides he doesn’t want to cross a shallow creek. You’re thinking about continuing the trail so you can get back to the barn. But your horse is thinking about the snake he just saw in the water that you didn’t or that the water is deeper or faster than the last few times he crossed.

You want to just move on and to you it’s no big deal because everything looks normal to you. So, you kick and ask your horse to move through it. Nope. He’s not budging. So, you kick harder and cluck as you push the issue. Your horse gives a little crow hop and pins his ears for a bit. You push more and kick a few times, tugging on the bit. Now your horse does a quick spin, turns around and starts to trot back the way you came. You stop him.

Do you turn around, try again and push or not?

You’ve seen the higher escalation of rearing, spinning, and starting to run back the way he came and now you both are stopped. What should you do?

At this point, if you push one more time, your horse is going to explode. His instincts are saying it’s dangerous and to “fly”, but you are pushing him over and over which escalates the situation to your horse going into the “fight” mode.

And let me tell you, odds are that you’re going to lose against a 1200-pound horse in “fight” mode. That’s when they are their most dangerous.

This is your last chance to stop pushing before all hell breaks loose. So, don’t push again!

But where should you have stopped pushing… if this is too far?

If you listened to your horse instantly and allowed him to decide where to go and when, then this wouldn’t have happened, but… you also would be teaching your horse that he is always in control. This is a slippery slope into developing a very aggressive, dangerous horse as well.

Decisions don’t have to be made unilaterally either. You can talk about it and make compromises. Sometimes you lead and sometimes your horse can lead. It depends on the situation. I always say, “go with your gut, but lead from experience.”

Now you are in the “grey area”. This is where you use your past experiences of what your horse is afraid of and how he has reacted in the past and blend it with your gut feelings about the situation.

How do you feel about what’s going on? Do you feel safe? Does your horse feel anxious? Why? Look closer at the situation and take a moment to think and feel through it before making the next step and pushing your horse.

If you look around and the creek seems safe and you understand your horse is timid about water but has crossed it in the past, then ask gently while reassuring your horse that it’s ok to cross. Only ask once and then pause and wait for his reaction.

Think about how to take baby steps to work through this together without pushing too much, or too hard, or too quickly. That is only going to escalate the situation to someplace you don’t want to go.

If he takes two steps and then stops. Great. Stop, wait, and reassure your horse again that this is good. Continue positive baby steps and being gentle while listening closely to your horse’s body language. He is talking to you and it’s a really important conversation from his point of view.

Use your experience and gut to help push your horse in the right direction gently. Don’t give up, but don’t push too hard. There is a happy medium. 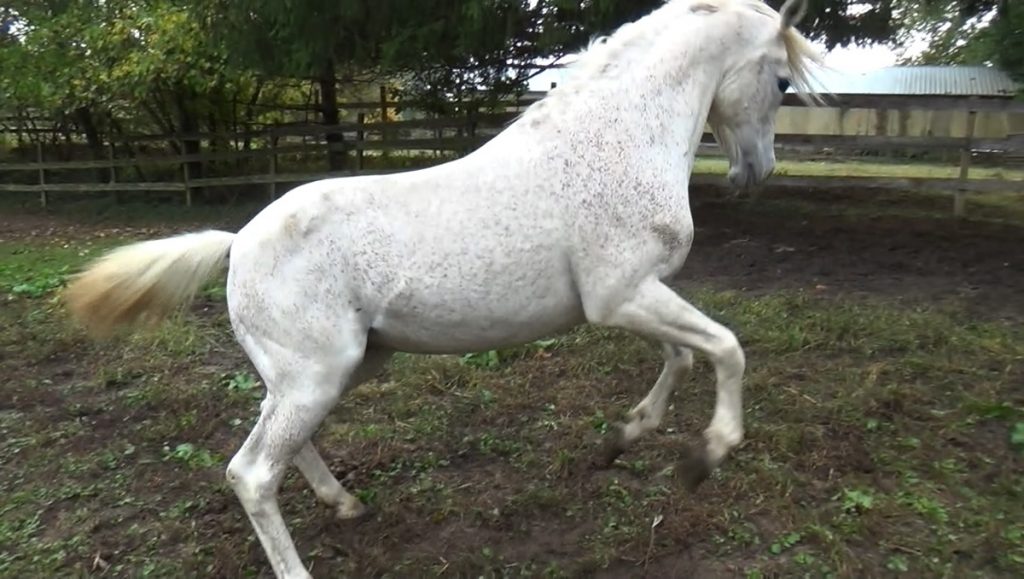 If he gets halfway through the creek and he gets spooked and turns around and ends up back on the other side again, that’s fine. Stop there, don’t push any further and go back the way you came. Look at each situation as a way to help your horse get over a fear or learn something new and keep the interaction positive.

Look for a spot where your horse did something good, even if it’s a few small steps in the right direction, and end on a good note. This needs to be a positive lesson for both you and your horse. Stay calm, and try not to get frustrated.

The last thing you want to do is push over and over to where your horse just remembers the frustration and the negativity. Because then you’ll be teaching him NOT to do it and NOT to trust you.

If you end on a good note, no matter how small, then the next time you do this, your horse will try harder and do better because he has learned to trust you. He will also start to realize that you are there to help and protect him as an integral member of the herd. In the long run it will even raise your standing in the herd to show him you are also a good leader.

To sum up today’s lesson…

I hope that helps if this is a question you have thought about too. As always, I’d love to hear your stories, so let me know what experiences you’ve had with this in the past.

If you feel someone you know could benefit from this blog, please pass it along. My passion is to help horses and their owners become better partners and friends and experience an amazing life together.